“US lives in solipsistic fantasies” 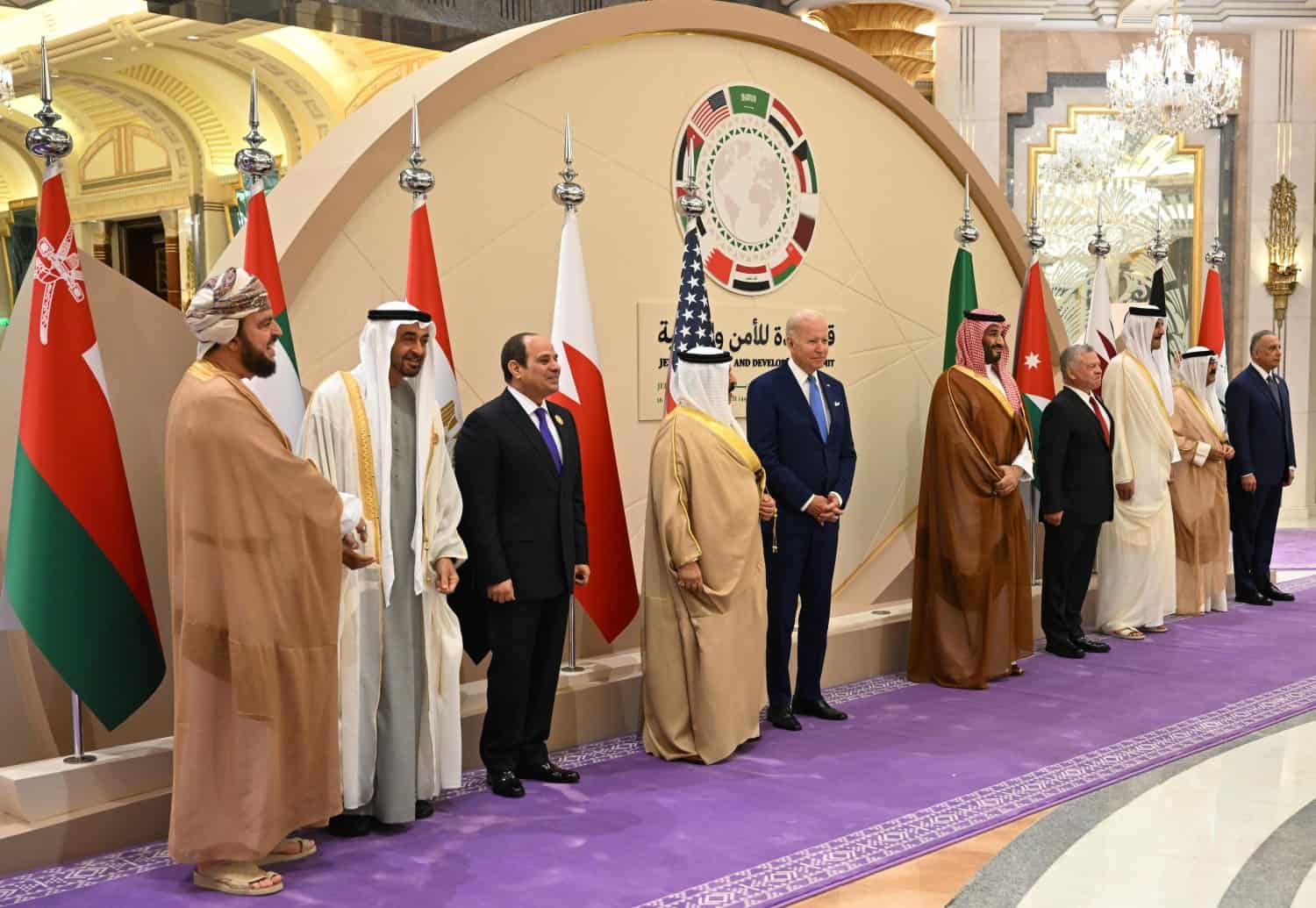 US President Joe Biden with Arab leaders during his recent visit to Saudi Arabia. (AFP)

NEW YORK: Chas W Freeman, Former Ambassador of the United States to the Kingdom of Saudi Arabia, was one of the speakers at Middle East Policy Council’s 109th Capitol Hill Conference, which discussed “US-Gulf Relations” in light of President Joe Biden’s recent visit to the Middle East, with focus on developments in energy sector and national security.

Forthright as ever, the former Assistant Secretary of Defense for International Security Affairs, livened discussions with his exceptional insights and criticized the United States for its “solipsistic fantasies” and coercive policies. Excerpts from his presentation:

“In June 1974, cornered by Watergate, Richard Nixon set off on a quick tour of the Middle East. This is something Presidents seem to do when they’re in trouble back home. In no foreign region is US statecraft so inseparable from domestic politics. But the unpalatable realities of the Middle East have made it the unchallenged center of diplomatic, hypocrisy and double standards. It’s where the values based foreign policies that our domestic politics demand go to die.

Pledging allegiance to Israel, regardless of its gross violations of Palestinian rights and neighboring states’ sovereignty. Prize? Manna from heaven in the form of campaign donations from American Zionists and their fellow travelers.

Similarly, given the American addiction to cheap energy, a quixotic desire for Saudi intervention to lower the price of gas at the pump springs eternal.

Domestic political calculations, not the strategic pursuit of national interests, have just led President Biden to affirm his fidelity to Zionism with a trip to Israel, the only country in the world where Donald Trump is more popular than he is.

From Israel, the President traveled to Saudi Arabia, hat and emergency gas can in hand to dine on symbolic pro as a guest of Prince Mohammed bin Salman, who, to much domestic American applause, he had loudly denounced and pledged to make a pariah. But no one should be surprised that he didn’t condemn the Saudi government for the murder of my friend Jamal Khashoggi.

Neither he nor any other (US) President has ever held the Israeli government accountable for murdering Americans like Shireen Abu Akleh, Rachel Corrie, or the crew of the USS Liberty.

Get real. Why should the President be more concerned about a dead citizen of Saudi Arabia than about dead Americans?

In Jeddah, the President bumped fists with Saudi Crown Prince Mohammed bin Salman and made Israel’s case for a normalized relationship with its Arab neighbors despite its continuing cruelty to the Palestinian Arabs it oppresses.

US has lost its grip in West Asia

If it’s obvious why President Biden needed Israel and Saudi Arabia at this moment, it’s less clear why they needed him.

America has lost its grip on West Asia, which is now not its or any other great power’s fiefdom. Diminished leverage in the region makes Washington a less compelling partner than it once was.

The United States no longer attempts to achieve peace for the Palestinians. Is cozying up to Iran’s enemies, refusing to deal with Iran itself, and continuing to trash the JCPOA a strategy? Or just a posture dictated by domestic politics.

It’s far from clear that shared fear of Iranian power and weaponry can sustain American influence in the region, as the so-called peace process and shared dread of godless Soviet communism once did, regardless of doubts about Washington’s reliability as a protector.

However, Israel – they are participants in the eruption of rail politique known as the Abraham Accords – and Saudi Arabia all recognize that they have no real alternative to a US security umbrella. No other great power is able to assume or indeed, has any desire to take up American defense burdens in the region.

But what’s in it for Americans to soldier on?

There are in fact serious matters at stake for the United States in West Asia, beyond the sole reason the President gave to exclude Chinese and Russian influence there. Many factors dictate a sound American relationship with Saudi Arabia and other Gulf Arab countries. Among these, the United States may no longer need Saudi oil, but everyone else does. Saudi Arabia supplies one-sixth of the world’s exported oil. Other Gulf Arab states close to Riyadh supply another eighth. The Kingdom leads OPEC, which exports almost 50 per cent of the world’s petroleum. OPEC plus Russia supplies just a bit under three-fifths.

It’s the balance of supply and demand in the global market, not political pandering to angry American consumers, that determines energy prices, supports or undermines global prosperity, and helps determine rates of inflation.

If you’re concerned about energy prices, you’d better be on speaking terms with Riyadh. Moscow too.

Washington has set aside reliance on diplomatic persuasion in favor of coercive policies based on dollar sovereignty. The United States now imposes sanctions on any and all countries that defy our policies. This practice and the lawless confiscation of a growing number of country’s dollar reserves have put America at odds with much of the world.

The dollar ceased to be convertible to gold in 1971. Since then, its centrality to global trade settlement in finance has been sustained by a Saudi commitment, which OPEC grudgingly follows, to price energy in dollars. Should the Saudis decide to accept other currencies for their oil or gas, markets for other commodities would do the same. This would collapse the dollar and the exorbitant privilege it affords the United States, and terminate US global primacy. This is not a small matter.

To get from Asia to Europe or vice versa, you need permission to transit Saudi airspace. So yes, US global strategic mobility is hostage to the Kingdom’s goodwill. The geopolitical cost of an unfriendly and uncooperative relationship with Riyadh would be immense.

‘The dollar ceased to be convertible to gold in 1971. Since then, its centrality to global trade settlement in finance has been sustained by a Saudi commitment, which OPEC grudgingly follows, to price energy in dollars. Should the Saudis decide to accept other currencies for their oil or gas, markets for other commodities would do the same. This would collapse the dollar and the exorbitant privilege it affords the United States, and terminate US global primacy.’

The most extreme Islamist movements bracket the United States and Saudi Arabia as enemies. Intelligence from the Kingdom remains essential to effective US defence against terrorist attack by them.

Saudi custody of the (Islamic) Holy Cities of Makkah and Madina gives it worldwide soft power. Saudi Islam has shown that it has the potential to be either a father of Muslim extremism and anti-Americanism, or its most effective antidote. After supporting religious intolerance for decades, Saudi Arabia now actively combats Islamist causes. This cannot be taken for granted.

Saudi Arabia is the largest single foreign purchaser of both American and British defence equipment and services. Many production lines in the US and UK would shut down if the Kingdom bought elsewhere. Lots of jobs would be lost.

US relationship with Saudi Arabia is, of course, not the only challenge to the US strategic interests in the region. Consider these other issues.

Current US policies toward Iran invites it to emulate North Korea, which responded to maximum pressure by developing a nuclear deterrent to attack by the United States, thus creating a previously non-existent threat to the American homeland.

The 40-year-old Gulf Cooperation Council, GCC, is on the mend. But frankly, just as feckless as ever, U.S. forces have illegally invaded Syria, and they’re engaged there in dangerous maneuvers against Russian, Turkish, Iranian and Lebanese, as well as Syrian forces. These confrontations risk wider wars and not just in the region.

The post-Saddam order, the assembled battalions of the Blob, unilaterally imposed on Iraq early this century, is unstable and crumbling. Iraq’s future alignments are in doubt. The Biden administration doesn’t appear to have an answer to this.

Egypt, Israel, Saudi Arabia, Turkey and the UAE, among others, are attempting to dilute their strategic over-dependence on the United States. They don’t share Washington’s global obsessions, are alarmed by its erratic politics, resent its efforts to coerce them into placing dubious US interests above their own, and will not downgrade relations with China and Russia to please America.

Israel continues to terrorize and dispossess its captive Arab populations, and to violate the sovereignty of neighboring states. The Zionist state is increasingly dismissive of US advice to restrain its violent behavior. It appears to believe that it has a blank cheque from America. Maybe it does.

Others in the region want the US to make them safe from Israel; not Israel safe from them.

It is a truism that failure provides more lessons than success. West Asia is a region in which abundant policy failures offer a veritable cornucopia of insights into warfare and diplomacy. Few of these would come as a surprise to classical Arab, British, Chinese, Dutch, French, German Greek Indian, Italian, Japanese, Korean, Mongol, Persian, Portuguese, Roman, Russian, Spanish, or Turkish students of statecraft. But the United States no longer teaches geography or foreign history at its schools, has ever fewer foreign correspondents, glorifies war and seems to view diplomacy as nothing more than the foreplay before a military assault.

Our habit of plotting foreign policies as vectors of ill-informed popular perceptions and passions belies reality. By reality I mean what’s out there, whether Americans perceive it and believe in it, or not.

Not bothering to figure out how foreigners see things enables Washington to avoid having to ponder how they might react to its decisions. Americans now feel free to engage, indulge solipsistic fantasies that justify foreign policies so out of line with transit events abroad that they gain more blowback than traction.

Neither the world nor the United States is what it was in the formative years of our leaders and their key subordinates’ experience. They and we need to come to grips with radically altered realities. Acting as if nothing much has changed is the equivalent of playing chess blindfolded. It’s a sure path to geopolitical checkmate or worse.

The Biden trip to Israel and Saudi Arabia is proof that passionate attachments and moral outrage directed at foreigners may be freebies on the campaign trail, but can be a serious challenge and embarrassment to anyone who actually gets elected, takes office and has to govern.

Venomous denunciations of foreign leaders now have consequences. A bit of rhetorical restraint seems to be in order.

About 20 years ago, I was present when a well-meaning visitor asked then Crown Prince Abdullah bin Abdulaziz Al Saud to provide Israelis with useful private advice on how to make peace with others in the region. Abdullah replied: “Tell them if they want to be loved, they should do something lovable”.

Chas Freeman is former US Ambassador to Saudi Arabia, Senior Fellow at Brown University’s Watson Institute for International and Public Affairs, and a Board Member of Middle East Policy Council.