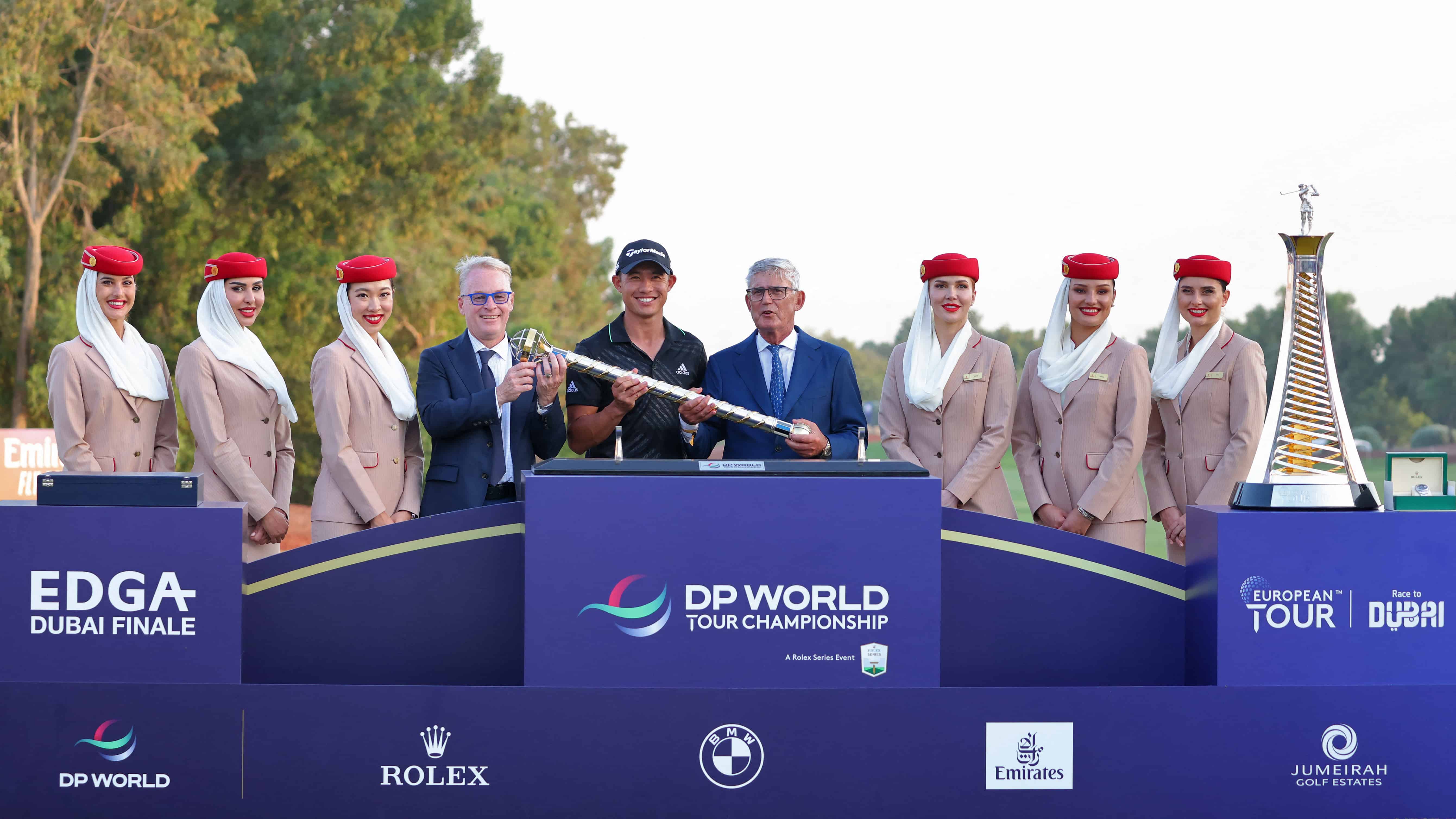 Collin Morikawa (C-L) of the US poses with the winner's baton during awards ceremony of the Dubai DP World Tour Championship at Jumeirah Golf Estates in Dubai. AFP

Collin Morikawa fired a final-round 66 to win the DP World Tour Championship in brilliant fashion on Sunday and create history by becoming the first American to win the season-long Race to Dubai.

World number two Morikawa made five birdies in his last seven holes at Jumeirah Golf Estates’ Earth course to close with a six-under-par fourth round and a winning total of 17-under-par 271.

Rory McIlroy, who led the tournament heading into the last few holes, fell back with consecutive bogeys on the 15th and 16th holes.

The Northern Irishman was extremely unlucky at the 15th, as what looked like a terrific wedge shot hit the pin and rolled back into the bunker. He eventually finished on 12-under par, after missing a short par putt on the 18th green.

On his way to submit his card, an angry McIlroy tore his shirt in frustration.

Matt Fitzpatrick, winner of the tournament last year and in 2016, made a charge on the final day, but fell back with late bogeys on the 16th and 17th. The Englishman was tied second at 14-under alongside Alexander Bjork (70) of Sweden.

Nicolai Hojgaard (67) of Denmark and Scotland’s Robert MacIntyre (71) were tied for fourth place at 13-under par.

For some time during the day, as Fitzpatrick made his charge and the birdies dried up for Morikawa, there seemed to be a possible twist in the Race to Dubai tale.

If the Englishman won and the American finished outside the top nine, Fitzpatrick would have become the European number one.

It was not to be, as Morikawa stepped on the gas after a superb birdie on the tough 12th hole.

If golf tournaments are won on the back nine on Sundays, this was probably a fine example of it.

The 24-year-old Californian birdied the 14th and 15th, and then closed with back-to-back birdies on the 17th and 18th.

“It’s so special. I came to Dubai last year, obviously not having played too many European Tour events, and I told everyone that I wanted to come out here and win… win the championship and win The Race to Dubai,” said British Open champion Morikawa.

“I had it in my control this week. Obviously, if I won, I would have sealed the deal, and that’s all I focused on really…

“I respect history and I respect it all. My mind does not remember a lot of historical facts, even when it comes to golf, but this one is going to be special… the first American to win The Race to Dubai. It’s an honour.”

Fitzpatrick moved to 15-under par and took the outright lead with his seventh birdie of the day on the 15th hole.

But he found the water with his second shot on the par-four 16th for a bogey, and then missed his up-and-down for a second straight bogey on the par-three 17th from the front greenside bunker.

A birdie on the 18th was only a case of too little, too late.

“I thought if I shot eight-under, I might have a chance. And to be honest, if I had shot that, I think I would have had a chance really,” said Fitzpatrick.

“I’d take that at the start of the day.”

American Billy Horschel’s race ended when he closed with a 69 and finished in tied 32nd at six-under-par.

The American needed to finish at least inside the top eight to have any chance of topping the Race to Dubai. Finishing second, however, secured him a bonus of $600,000.