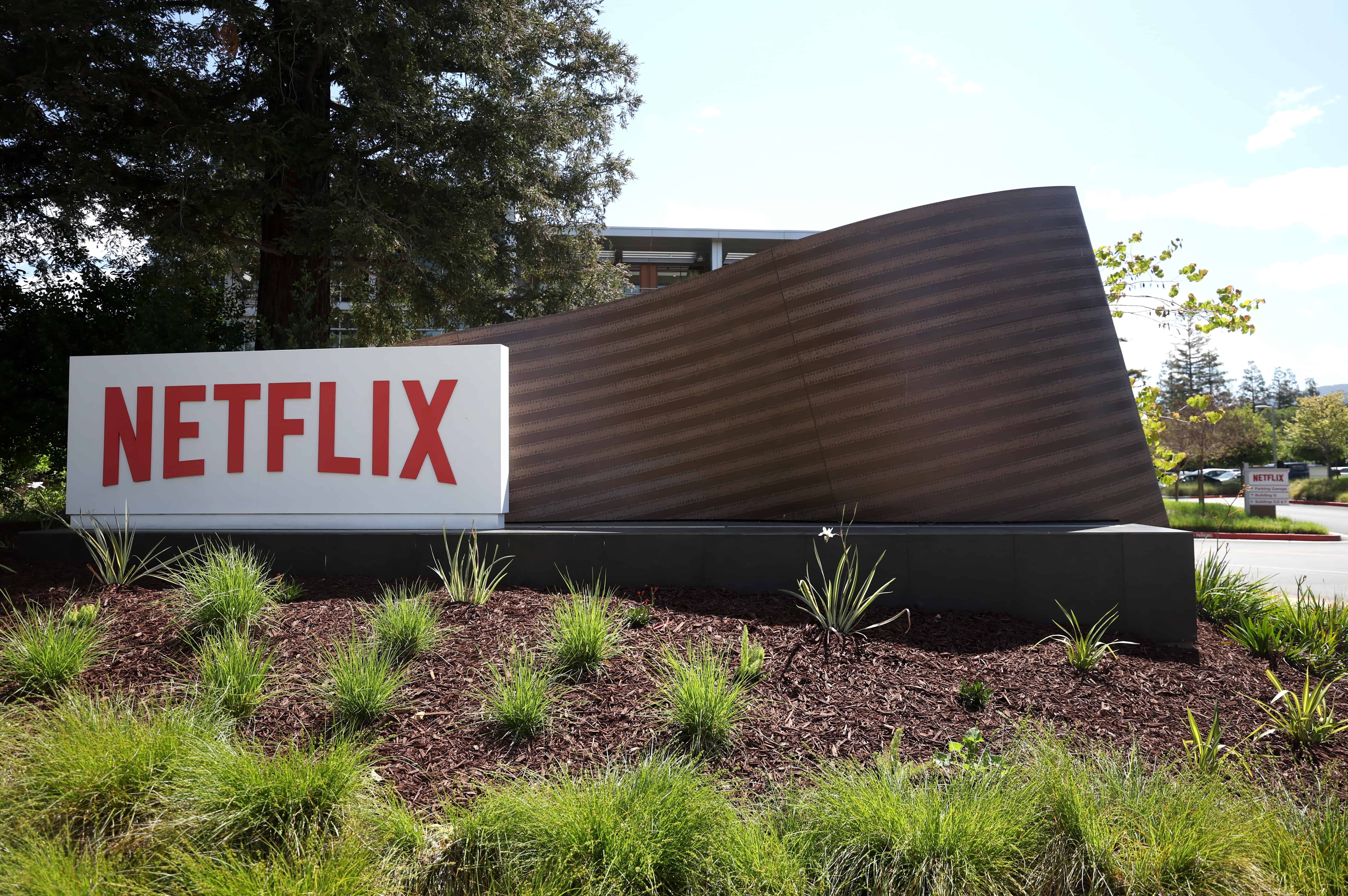 A sign is posted in front of Netflix headquarters on April 20, 2022 in Los Gatos, California. (AFP File Photo)

John Fithian, head of the US movie theater industry’s trade body, is used to shrugging off claims that Netflix will spell doom for the big-screen, popcorn-munching experience.

But with box offices bouncing back from the Covid-19 pandemic, and Netflix stock plummeting after its first loss of subscribers in a decade, Fithian predicts movie theaters could even help the streaming giant adapt to an uncertain future.

“The theater door has been open to play Netflix movies for years,” Fithian told AFP at CinemaCon, the annual Las Vegas summit held by the National Association of Theatre Owners.

Fithian said he has held “lots of discussions” with Netflix content chief Ted Sarandos and “urged him to take a shot at seeing if they can also do well theatrically.”

“I don’t look at share prices one way or the other — I just look at the data… you can make more money, even if you’re a streamer, if you put your best movies in theaters first.”

Releasing films widely on big screens before offering them to subscribers would long have seemed anathema to Netflix’s wildly successful business model, which has sent the likes of Disney and Warner scrambling to catch up in the so-called streaming wars.

Netflix has revolutionized Hollywood and the way movies are consumed, splurging huge amounts to lure top stars away from the traditional studios and keep cinephiles on their couches.

Netflix has already announced new strategies it did not previously countenance, including cheaper subscriptions with advertising.

The streamer currently releases its most prestigious titles in theaters for limited runs — so that they are eligible for Oscars — but could a broader theatrical focus be on the cards?

“I think the Netflix model might evolve somewhat into that… we hope it does,” said Fithian.

A run in theaters means a movie “pops and stands out better,” while “movies that go straight to streaming services get lost,” he added.

The mood at this year’s CinemaCon is noticeably brighter than last August, when a Covid-19 variant was spooking moviegoers, and studios were bypassing theaters to release their wares on streaming.

This week, a boisterous Fithian made headlines by declaring in his annual address that the pandemic-era trend of releasing films on streaming the same day as theaters was “dead.”

“That wasn’t just pulled out of thin air — that’s in consultation with lots of our studio partners about what they’re thinking on how they’re going to release their movies,” he told AFP.

Major studios have recently cheered theater owners by largely reverting to an exclusive “window” when movies can only be seen on the big screen — albeit for 45 days or less, down from around 90 days pre-pandemic.

“It’s more of a discussion of how long a window — or period of exclusivity — should be. It’s not whether there should be one or not,” said Fithian.

Despite the warm words for Netflix and rosy predictions for recovery, there remain causes for worry.

Fithian said the theater owners’ association was “very concerned” about Amazon Prime, noting that the subscription service’s business model was not “trying to make money off of movies” but instead getting consumers to “buy their groceries and use their shipping services.”

On Wednesday, it emerged that MGM’s film leadership would be leaving the studio behind the James Bond films and recent hits such as “House of Gucci” and “Licorice Pizza.”

“If they’re buying companies that take movies out of the supply line for theaters, to basically only release them in the home, they’re reducing consumer choice and reducing competition,” said Fithian.

Last month Apple TV+ became the first streamer to win best picture at the Oscars, in a year described by Fithian as “very bizarre.”

“We’re still very concerned about the Oscars, in general,” he said, pointing out that mainstream smash hits like “Spider-Man: No Way Home” had missed out on best picture nominations.

Meanwhile, theater chains operating in Russia have been hit by Hollywood’s embargo over the invasion of Ukraine.