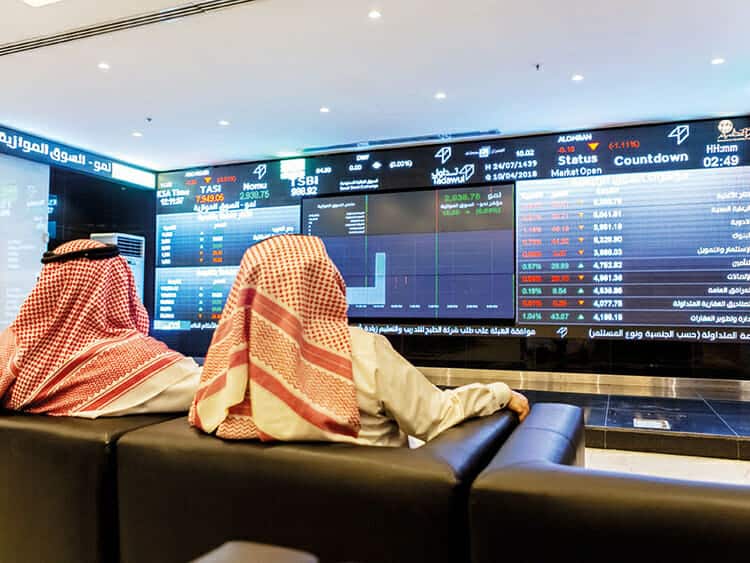 The rise in oil prices drove the Saudi stock market to its highest level in 14 years.

The Saudi index began the week with a drop due to pressure on the leading shares like STC, which fell about 3 percent, after the Public Investment Fund announced it had exited from the company. As a result, the market’s main index dropped by 0.4 percent to around 11450 points. Fitaihi Holding’s stock, however, increased by about 1 percent, after announcing plans to sell a stake in one of its subsidiaries.

The next day, the Saudi index increased 0.1 percent, with Al-Rajhi Bank rising 1.6 percent and the Saudi National Bank rising 2.5 percent due to stable oil prices, and OPEC agreeing to maintain its current agreement to add 400,000 barrels of oil per day to the market in November.

The main Saudi stock index closed trading on October 7, with an increase of 19.45 points, to close at the level of 11,591.33 points, with transactions worth 6.5 billion riyals. According to the daily economic bulletin of the Saudi News Agency for the Saudi stock market, the volume of traded shares reached 167 million shares, shared by more than 290 thousand deals, in which 50 shares were recorded.

Dubai Financial Market began the week with a drop of 0.42 percent to close at 2833 points, the index’s worst monthly performance since February 2021. Emaar Properties, which plummeted by roughly 2 percent, had its lowest performance in about three months due to the ongoing selling surge.

On the other hand, the Abu Dhabi market’s general index gained by roughly 0.3 percent, regaining the levels of 7,700 points lost at the end of last month. These gains occurred amid record liquidity of over $817 million, bolstered by the inclusion of ADNOC Drilling’s shares, which grabbed over 20 percent of the market’s liquidity with transactions totaling over $190 million.

On October 4, 2021, the Dubai index fell by 0.8 percent, pulled down by a 2.1 percent drop in the Emirates NBD Bank stock and a 1 percent drop in Emaar Properties’ stock. The shares of ADNOC Drilling gained 1 percent after increasing by 28 percent at the commencement of its IPO on the stock exchange on Sunday in a public offering of $1.1 billion, the largest ever on the Abu Dhabi Stock Exchange.