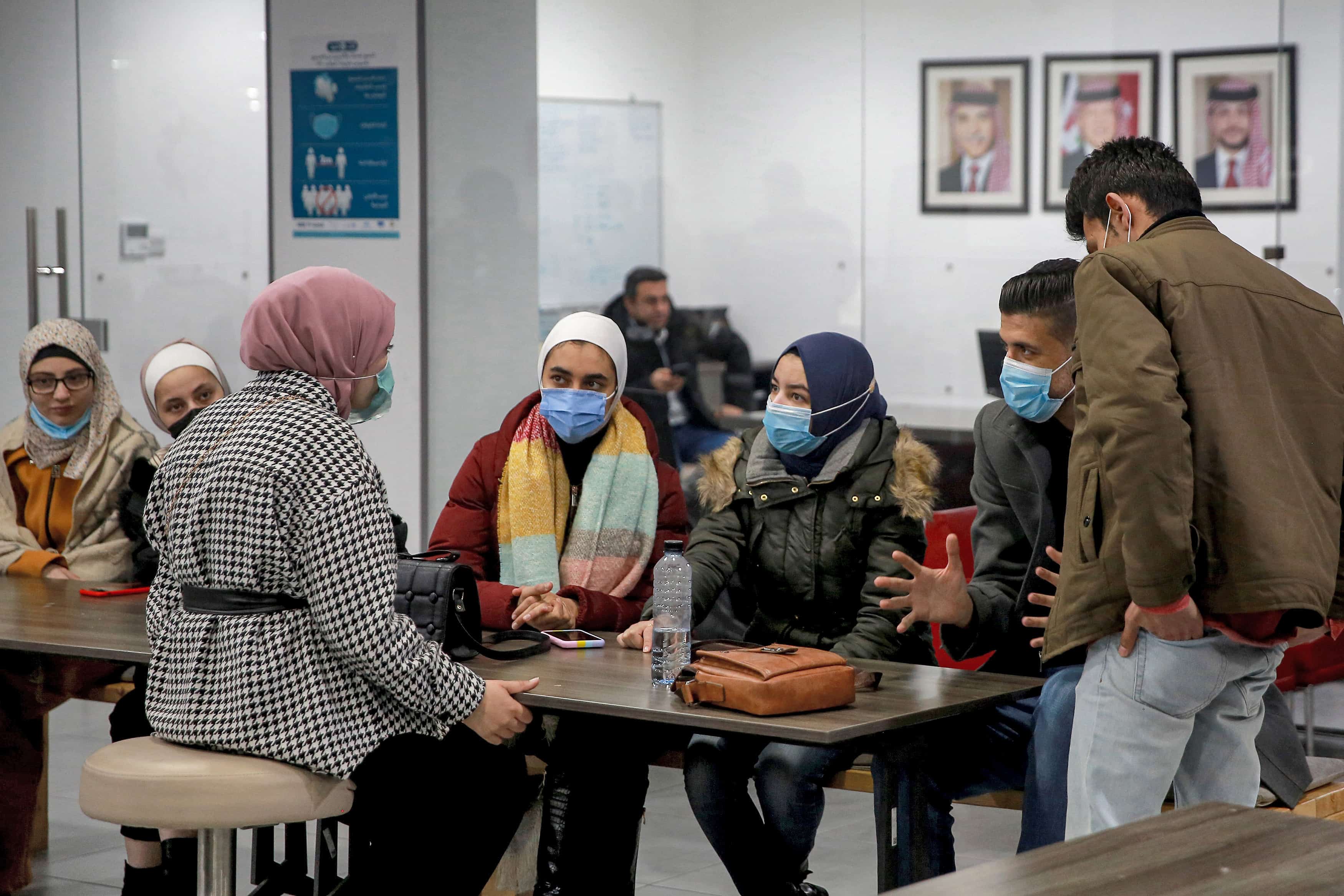 People sit together at the TechWorks digital fabrication lab in Jordan's capital Amman on February 20, 2022. AFP

In the age of Covid-19, Jordanian mechanical engineer Saliba Taimeh pondered how to deal with one contaminated everyday surface: the handrails of escalators in shopping malls and transport hubs.

He came up with a device to sterilize them with UV rays — and this is where TechWorks stepped in.

A wealth of ideas would not have seen the light of day without TechWorks, a Jordanian platform aimed at bringing together youth, ideas and resources to jump-start innovations.

Set up in 2018, TechWorks says its mission is “to plug into entrepreneurial and innovation ecosystems” and turn ideas into reality.

It is equipped with state-of-the-art technology such as 3D printers and affiliated with a foundation set up by Crown Prince Hussein.

Last year, it attracted about 100 inventors and start-up companies, enabling them to produce prototypes quickly and at low cost.

Taimeh, 39, said TechWorks “provided me with every support, back-up, advice and guidance” to help perfect the sterilizing device, after 23 attempts over almost two years.

His invention sterilizes the handrails of escalators “from all kinds of viruses, such as coronavirus and bacteria,” he said.

After contacting several international companies, a German firm specializing in health and safety in public places signed up to manufacture the “Brigid Box”.

Weighing in at 7.2 kilograms (almost 16 pounds), it can be installed in less than 15 minutes.

Taimeh’s success story is only one of many.

High school student Zain Abu Rumman, 18, has developed a tracking device for elderly patients and people with special needs, worn like a watch or around the neck.

The “SPS Watch” has a battery that lasts eight days and is resistant to water, heat and breakage.

“The device can send alerts to the mobile phone of a family member through a special application in case the person wearing it falls or is hurt, or if he strays from a certain place,” Abu Rumman said.

It took him two-and-a-half years to perfect and he has struck a production accord with a Chinese company.

Omar Khader, 26, works for Jazri Studio, an industrial design company which has devised a “smart” plug to protect children from electric shocks.

“TechWorks has advanced equipment, engineers and technicians that help us convert our ideas into successful products,” he said.

FabLab ‘open to all’

Other designers, like 32-year-old civil engineer Malik Nour, still have a long and expensive way to go to refine their products.

Nour’s brainchild is the “Pikler Triangle”, designed as a safe and environmentally friendly children’s toy.

He hopes to attract Swedish furniture giant IKEA to take on his products, which he is already selling over social media to customers in Jordan, Saudi Arabia, and the UAE, under the label of “Fares World”, named after his child.

Ismail Hakki, executive director of TechWorks, said its aim is to provide “a creative environment and all the necessary resources to support and enable young people to transform their projects from a mere idea into a real product”.

The doors of the project’s “Fabrication Lab”, or FabLab, are “open to all; we support students, entrepreneurs, and startups”, he said.

FabLab also provides services to doctors and hospitals in the fields of facial restoration, digital dentistry, face masks and sterilization.

At the request of a doctor, it transformed the chest x-ray of a patient with a malignant tumor close to the heart into a three-dimensional model of the patient’s chest making it easier to operate.

FabLab touts many successes, including a “smart home” which allows a mobile phone user to control electrical appliances inside the house from afar by turning on heating or cooling systems, and a piano keyboard to help a blind musician play.

It plans to open two more branches in Jordan to provide technology training and help for school and university students.