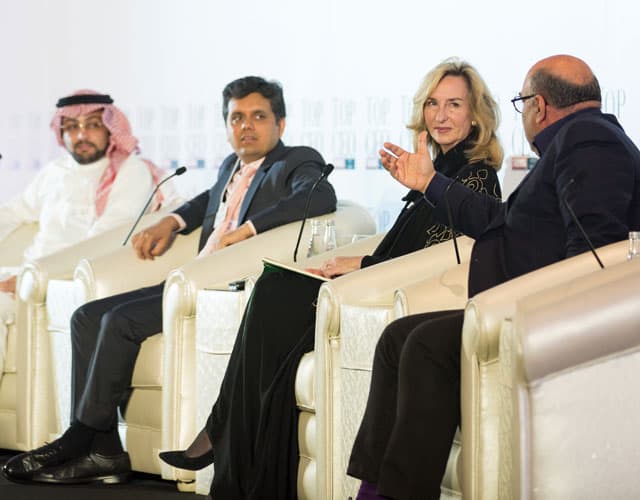 CEOs in the Middle East today operate in a very complex environment, characterized by fast-evolving regulations, start-up challenges, changing consumer behavior and technological disruptions, among others. Their job becomes even more demanding taking into consideration the fact that the region itself is witnessing a massive and rapid change amid low growth, a volatile oil market and the shift toward a data-based economy.

Further, the fundamental shift toward strengthening and expanding the role of the private sector as the prime driver of economic growth presents manifold challenges for business leadership, in the form of red-tape, human capital and stiff regulations. At the same time, opportunities, too, are galore for business leaders to become trendsetters, especially with a new breed of fearless and imaginative entrepreneurs emerging and changing the narrative.

It, therefore, becomes important to recognize the efforts of the region’s top business leaders, who are not only leading from the front in embracing the “new reality”, but also transforming the region and ushering in societal change.

In its fourth edition, the Top CEO Conference & Awards 2018, will be held on April 10 and 11 at King Abdullah Economic City in Jeddah, Saudi Arabia. This year too, as always, the spotlight is on the top chief executives of public listed companies. By teaming up with INSEAD Business School and leading global auditor KPMG, TRENDS takes into consideration only the hard facts, such as growth, profitability, size and corporate governance, of the publicly listed companies on the GCC stock exchanges, to compile the list of awardees.

The two-day mega event will witness a galaxy of C-suite executives, entrepreneurs, academicians and government officials, who will discuss, ponder and brainstorm the burning issues that confront the industry and the region. Besides, the two-day conference’s prime focus will be also on Arab women’s growing contribution to the economy and the evolving role of new leadership in today’s new phase of development. It’s just not an event, but an opportunity to set the agenda right for the exciting times that lie ahead.

“A new ecosystem is needed to cement the profound transformation unfolding in the region. This paradigm shift is paving the way for new cooperation and geopolitical equations. There’s a dire need for the Gulf countries to expand international trade relations to create more opportunities for the industry and, at the same time, bring tangible benefits for society as well,” says Julien Hawari, co-CEO of Mediaquest Corp, the publisher of TRENDS magazine.

Explaining how the Top CEO rankings are different from other awards in the region, Professor Miguel Lobo, Director of the INSEAD Middle East Campus, says: “The TOP CEO rankings are unique in the region for their focus on measurable and verifiable data. While this methodology has its strengths and weaknesses, it is a breath of fresh air and a much-needed complement to the numerous other awards based on subjective assessments.”

Ushering in a new era of growth and prosperity will require doing away with the existing stringent regulations as well as bureaucratic and administrative hurdles, and putting new ones in place that free up the private sector to flourish. Even though the Gulf Cooperation Council (GCC) is blessed with a young population and is labor-rich, strict rules restrict the movement of goods, people and capital, and promote exclusion. Pro-industry polices are the need of the hour, foremost being antitrust and anti-dumping laws, which can offer a level playing field to private players.

The conference will see some of the best brains from the region discuss what role the government can play to liberalize economies in the GCC and help the private sector play the role of a transformer in creating an inclusive society and finding new international markets.

Today, there is no doubt that the corporate world also needs to introspect and transform its culture to bring in more profitability and efficiency. As the business environment is changing at a break-neck speed, with the focus firmly on venture-capital operations, professional services and the infusion of technology, the central point of discussion will revolve around how to attain a harmonious equilibrium in the whole process of restructuring, so that all stakeholders are taken along on the growth trajectory.

This calls for a social model, which can help provide guaranteed security to citizens from the vagaries of competitive markets. It will augur well if the Middle East studies social safety nets in European nations and replicates them here, keeping in mind the culture and nuances of the region.

Even as the private sector is taking giant strides and increasing its footprint in the regional economy, governments’ rising fiscal deficits, the introduction of value-added tax (VAT) and cash flow constraints have changed business dynamics in the GCC.

In this context, the role of corporate leadership is witnessing a fundamental change within the organization, with an increased focus on the company’s profitability and expenditure, as well as mergers and acquisitions, among others.

With many believing that data is the new oil in the region, the strategic value of leaders for their respective organizations now depends on how efficiently they apply financial data to achieve profitable growth and implement technologies that not only allow the automation of tasks, but can also prepare the company to harness and use data, from fraud detection to compliance and corporate governance.

Taking this further, the Top CEO Conference sessions will take up various burning issues, where an elite private gathering of top executives and decision-makers will share insights and invaluable experiences on the challenges currently confronting c-suite management. Debates and discussions will converge diverse views toward the main agenda of how leaders need to adapt to the fast-changing business landscape. Some of the topics that will be discussed include ‘Beyond Vision 2030’, ‘New Alliances’, ‘The Execution Challenge’ and ‘Securing the Future’.

Women to the fore

Another major highlight of the Top CEO Conference & Awards 2018 will be the launch of the Arab Women Forum to highlight the transformational role Arab women are playing in lifting the economy and society. The forum couldn’t have been launched at a better time, in light of the massive changes taking place in Saudi Arabia, which is granting unprecedented rights to women in the kingdom, including allowing them to drive and relaxing the much-criticized guardian system. However, there’s still a long way to go.

Some Gulf states have the world’s highest female-to-male university enrollment ratios, but, when it’s time for the transition to work, women are underrepresented. Those who work carry the burden of balancing their corporate and domestic lives and may also face prejudice and harassment.

At the conference, ministers, top women executives and tech entrepreneurs will hold candid discussions on inclusivity, gender equality in the workplace and creating a discrimination-free environment to help women flourish and make a significant contribution in all spheres of life. With the representation of women on C-level positions still far from satisfactory, successful women entrepreneurs will discover a must-do list that organizations should follow to end the disparity.

“By earmarking venture capital and investment to women-led business initiatives, the governments can promote women’s inclusion and boost the GDP of the region to an unprecedented level, reduce unemployment and propel the economy toward a new direction,” stresses Hawari.

Undoubtedly, empowering region’s women and helping them become entrepreneurs to increase their contribution to the economy is one of the strongest ways forward in addressing gender inequality in the Gulf nations.

The conference will also deliberate on the new emerging geopolitical power equations in the region, concentrating on how the Arab world can transform its image and forge new alliances with the rest of the world, especially Europe, to create new trade and business avenues. Saudi Arabia has taken a lead in projecting itself as a moderate and progressive country. Can rest of the Arab follow suit? Such burning questions and more will be answered by the who’s who of the region.

What is clear today is that a major transformation is happening and at an incredible speed. The Top CEO Conference & Awards, year after year, has provided a platform for industry and political leaders to stay ahead of the curve and anticipate possible changes to drive future growth efficiently. This year, too, will not be any different.