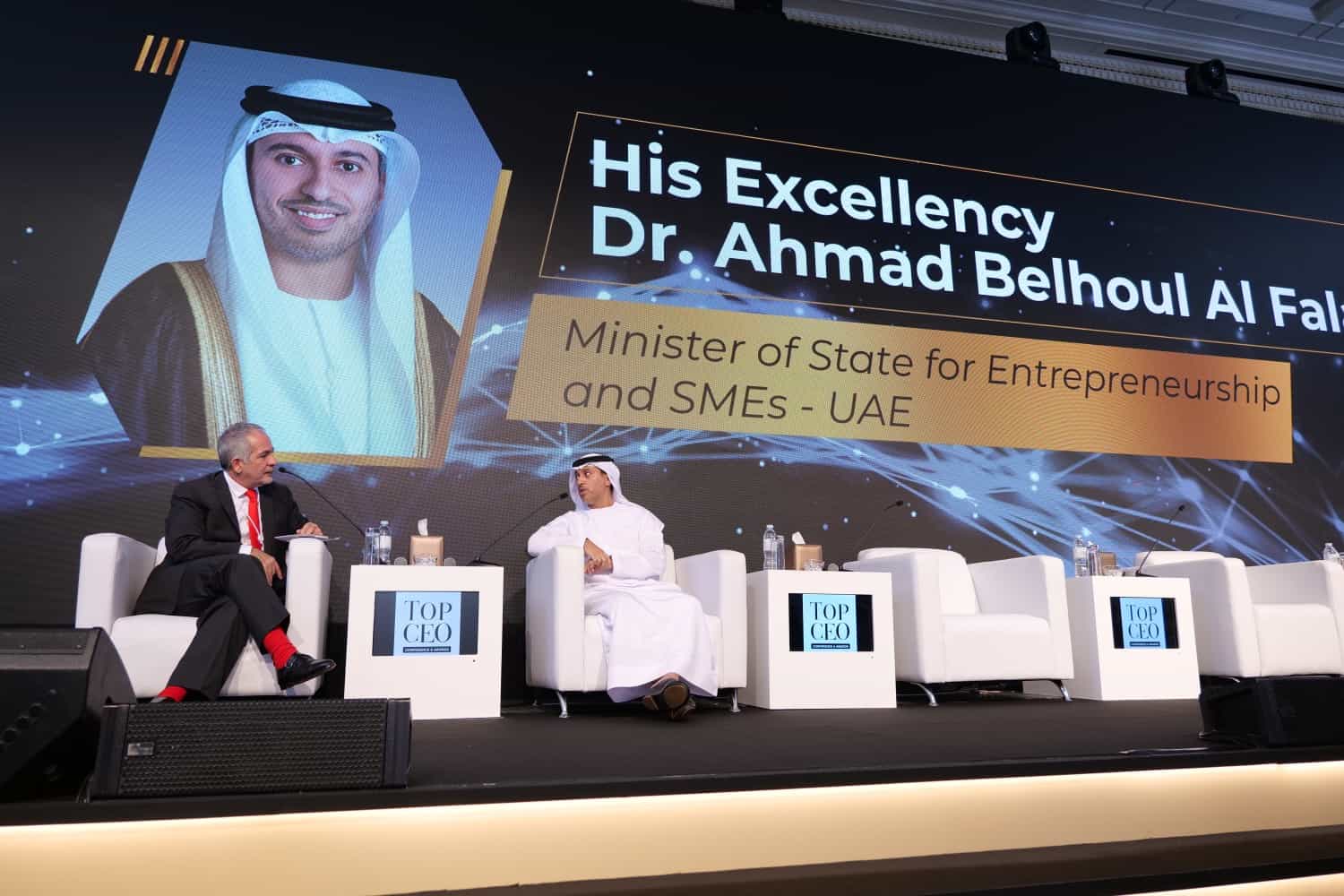 On the second and the last day of the TOP CEO Conference and Awards 2022 being held in Dubai, the speakers are discussing “The Great Business Reset” following the huge success of the Arab Women Forum on Day 1.

Among other issues, the last day of the two-day event — being held at Palazzo Versace, Dubai — focused on how unstable global economic cycles, regional conflicts, and health risks have made business management a Herculean task. The Certainty of Uncertainty of the TOP CEO event delved into the short-term and long-term business strategies that may be put in place to combat seemingly never-ending uncertainty.

‘The Inflation Monster session’ at the event explored the options before the governments and central banks of the region to handle the rising prices. Also, how will they build pressure to contain energy prices and what would be its impact? How are businesses going to adjust to this new challenge?

The second day of the TOP CEO Conference and Awards also reviewed the execution challenges in the current scenario and what needs to be done to create success stories? Can human capital make the culture leap?

Panel 1: The Certainty of Uncertainty

Al Falasi said that the younger generation in the UAE was more interested in startup  investments and called for adoption of technology in new entrepreneurial ventures.

“Blockchain is fundamental for scaling up, and technology is at the center of the business nowadays,” he said.

Al Falasi doesn’t see any major challenges facing entrepreneurs in the UAE. Yet, he thinks that the fear of failure and the culture of looking for a job might be an obstacle.

“But it is changing now,” he said. “Agility in businesses is going to be the key to all the challenges that await us”.

Mahfouz said that the pandemic caused us to perceive things from a new perspective.

“We can’t plan anything anymore, which is one of the implications of COVID-19,” she said.

Hamade discussed the importance of education and healthcare.

About the future challenges of inflation and high interest rates, Hamade advised the CEOs to think twice before taking high risks, keeping in mind that these obstacles are not specific to the region.

The inflation, he said, poses a bigger challenge for the banking sector. “That’s why we are very cautious about what we decide in the bank,” he said.

Garin warned that the inflation and high prices might force companies to close. “That’s why we need to be very careful about how the change will occur,” he said.

Khammas said that consumer behavior has changed after the pandemic.

“Simply, the consumer is now in the driver’s seat. And this is critical for the businesses to understand,” he said, adding he considered the region was ready and able to implement change in institutions by diversifying and responding quickly to consumer behavior.

Inflation seems to be a big issue for governments and businesses at the same time, so Sélim Chidiac, Chief Executive Officer at L’azurde Company for Jewelry advised MENA companies to review their business models and reduce their manufacturing costs to overcome this challenge.

Speaking at a panel titled “The inflation Monster” at the TOP CEO Conference, Chidiac said the MENA companies must develop “an on-going reviewing process of their businesses”.

Khalid Abdulla Janahi, Chairman at Vision 3, said the cause of inflation was behind us now.

“We have to look forward to how to treat this,” Janahi said. “Mainly in the GCC region, where countries are strongly connected to the US Federal Reserve System, dealing with inflation in an independent way is essential.”

Answering a question by the journalist Katie Jensen who moderated the panel, Simon Ballard, Chief Economist at First Abu Dhabi Bank predicted that the correction in the inflation rates will come but it will be hard to retain it at the previous levels. “We need to be more dynamic in the approach to sustain businesses and economies in the region,” he said.

Mohammed H A Abudawood, Executive Chairman at M Abudawood Group called for global and Arab leaders to work towards ending conflict. “We don’t need wars now, what we really need is peace to overcome the recent and upcoming economic challenges,” he said.

He also talked about the shift in Saudi Arabia’s strategies, assuring everyone that this huge transformation in terms of economic diversification and building new industries – entertainment and sports – will enable the kingdom to find new pathways towards progress and property, and at the same time, reduce its dependence on imports.

In a panel moderated by Hassan M. Fattah; Director of communications, at Crescent Petroleum, Raouafi said that bringing fresh blood is one of the most important roles of a successful leader.

Ahmed Ismail, CEO at Majid Al Futtaim Properties, discussed the needs of new businesses to embrace new business cultures like giving attention to time, in addition to leadership and vision.

Xavier Anglada, Managing Director at Energy GCAL and member of Accenture’s Global Leadership Council, and Innovation Lead in the Middle East described transparency as the most significant role of a successful communication strategy.

Philippe Blanchard, Founder at Futurous,  also mentioned education and its importance in MENA businesses especially when talking about leaders, since they must be a good example for employees.

Haifa Al-Jedea, Managing Director at SRMG Think, stressed the need for an empowered negotiator to GCC companies’ success stories, especially one who understands the needs of everyone.

Amr M Khashoggi, Chairman Amkest Group said there was a disconnect between what companies need and the skilled talent in the GCC. He described women and people with disabilities as skilled talent that GCC companies can benefit from.

Kamal Dimachkie, Partner & COO at TOUGHLOVE Advisors, who was the panel moderator, talked about the challenges faced by businesses in the GCC.

In contrast, Sarah Al Tamimi, Vice Chair of the National Committee to combat Human Trafficking & Deputy President of the Human Rights Commission, spoke about the opportunities in the region. She explained that COVID-19 pandemic had laid bare the specific digital needs of the GCC companies and advocated faster adoption of technology to become compatible with the next industrial revolution in the digital economy.

“STEM learning is a very big part of the future education, and many Saudi women have it, which seems to be a big opportunity for them as well,” She said.

“This is a fundamental change,” Calvez said. “The workforce of today wants to have their own values associated with the values of the company they work for”.

The panel ended with Calvez discussing the importance of learning how to think strategically and creatively in a way that enables talents to imagine the future, though not in the traditional ways.

GCC governments are sponsoring their own capital markets, which is obviously something they haven’t done before, and which May Nasrallah, Founder and Executive Chairman at deNovo, described as “a fundamental change”.

She also hoped for GCC countries to witness unified exchange as in Europe, though it might be difficult at this time.

Omer Unsal- Managing Director at Odin Financial Advisors agreed and added: “We are seeing a shift in the market listing and access in capitals in terms of times and dynamics”. He also considered the GCC as lucky, mainly in terms of rules and regulations as it’s a dynamic region in terms of technology businesses.

Abirshek Sharma, Founder and Chief Executive Officer at Foundation Holdings, said Saudi Arabia is the number one player when it comes to liquidity.

“We are in the golden age of IPOS with Saudi Arabia leading the way,” he said.

At the panel, “A New World: The Blockchain Revolution”, moderated by Hassan M. Fattah, Director of Crescent Petroleum, the participants discussed blockchain as a technology and the importance of education in this field.

Franck Mandon, COO at Million, said all information is registered and recorded on the blockchain, which allows individuals to trace it from the beginning.

Saqr Mashhor Ereiqat, Co-Founder at Crypto Oasis, said that blockchain is creating a value for the internet. He said most people still don’t trust a blockchain application, which makes it important to have a trustworthy platform.

As far as the education is concerned, Ereiqat said education is at the heart of any recent technology adoption. He urged everyone to educate themselves about blockchain and other upcoming technologies.

“Practical experience with education will insure a skilled generation,” he added.

Panel 7- The Metaverse: A Fad or a Revolution

Moderator Anand Vengurlekar, Strategic Innovation Advisor, discussed metaverse with Noah Raford, Futurist-in-Chief and Chief of Global Affairs at Dubai Future Foundation, at the panel titled “The Metaverse: A Fad or a Revolution”.

There is no doubt that metaverse is the next technological revolution, said Fady Kassatly Partner, Enterprise Solutions and Cloud at KPMG. He said the promise of the metaverse is to take all the premises of current technology and build on them to create a more engaging future.
According to Philippe Blanchard, Founder at Futurous, Augmented Reality and the metaverse are changing two elements: our time and environment.

Valerie Hawley, Director at Sorbonne Centre for Artificial Intelligence, said that a lot of businesses are now trying new digital spaces and what’s interesting is the shifting from reality to virtuality and vice versa.
Businesses are gaining revenues in both ways, Hawley said.

The event concluded with the Awards Gala. Before the distribution of the the Top CEO Awards, Julien Hawari, organizer of the TOP CEO, Special Edition, explained the procedure of the selection.

The Top CEO Awards, he said, are based on the financial performance, size and corporate governance of GCC-listed companies.

“All of the publicly listed companies in the Arabian Gulf stock markets are evaluated on their annual financial performance, and the ranking is not a result of a nomination by a jury relying on undisclosed metrics,” he said.

The companies, according to the organizers, are evaluated if they are listed on any of the seven GCC stock markets.

“One of the Big Four has audited the results, and KPMG is auditing the Top CEO ranking for the 2022 awards,” he added.

The awards were created in 2012 to recognize those who created value and boosted the region’s economy while maintaining transparency and good corporate governance.

The companies have been split into 10 categories and the Top 10 CEOs in each category were recognized, totaling 100 awards.

The Arab Women Forum was the highlight of the Day One where top executives, officials and experts explore ways to strengthen the role of women in regional business dynamics during various sessions.