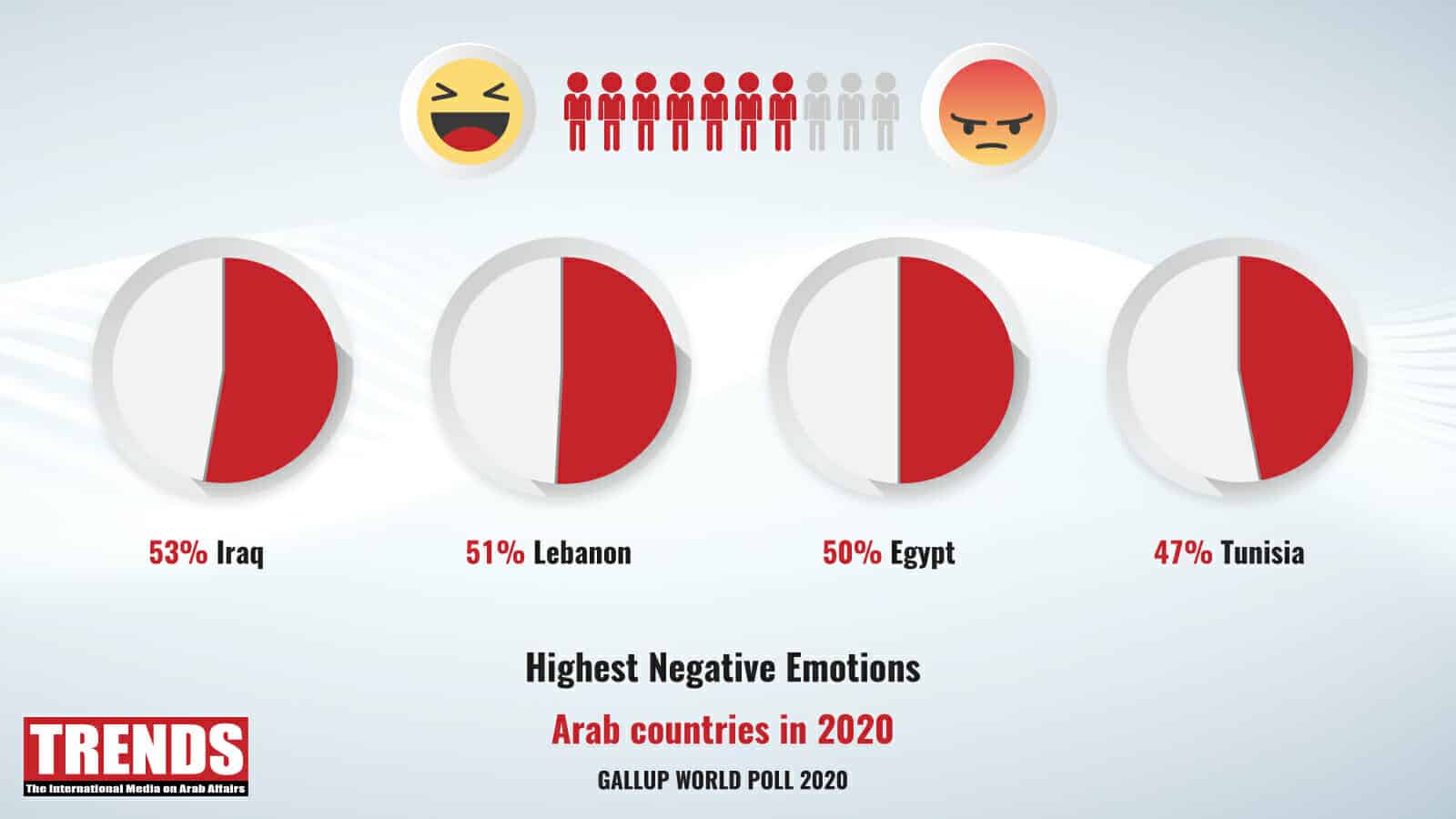 Iraq was the saddest and the angriest Arab country in 2020, followed by Lebanon, Egypt and Tunisia in that order, according to a Gallup World Poll.
With the successive political, economic, and social crises that affect some of the Middle East countries, their citizens are exposed to situations that provoke their internal anger and bring out negative emotions, which are usually expressed in mass revolutions and massive demonstrations, an increase in the crime rate, or even a rise in poverty and unhappiness rates.
Every year, Gallup, the American analytics and advisory company, surveys countries whose citizens have negative emotions. The organization has published its report for 2020, which shows the world was feeling the worst it had in 15 years. As a result, the index score reached a new high of 32 in 2020.
Gallup interviewed adults in 115 countries and asked them about the five specific negative experiences on the day preceding the survey. Four in 10 adults said they had experienced worry or stress (40 percent each), under three in 10 had experienced physical pain (29 percent) the previous day and about one in four or more experienced sadness (27 percent) or anger (24 percent).
According to the report, the anxiety and sadness indicators increased by one percentage point, the anger index rose by two points, and the stress index jumped by five points. After being stable for several years, the percentage of people who had body pain declined by two points.
The report said that 2020 will go down in history as the most stressful year ever. Between 2019 and 2020, the stress index increased by five points, indicating that an additional 190 million people worldwide were stressed.

SECURITY AND ECONOMIC CHAOS
Gallup aims to measure the index of negative and positive experiences that people are exposed to through this survey, which is not reflected or monitored by known economic indicators such as the growth rate. Gallup added that the global survey results provide an idea for decision-makers around the world about the mental health of their people.
The high rate of negative emotions in Iraq is due to the country’s long period of instability and the violence that Iraqis have experienced such as the sectarian war and the assassination of many protesters.
The Lebanese people’s feelings of anger are due to their terrible living conditions, which they have been suffering since 2019, and the sadness and anger following the Beirut explosions in August 2020.
The Lebanese people’s sense of anxiety, anger, sadness, and psychological pain increased more than the rest of the people surveyed between 2018 and 2019, as the percentage increased by 18 points out of 100, while the rate of those who said they experienced positive feelings decreased.
Tunisia is also experiencing a severe economic crisis with income sources decreasing faster than predicted, especially considering the detrimental consequences of the COVID-19 pandemic.
The Tunisian people are currently suffering from a spurt in unemployment rates and high costs for products and services, a loss in currency value, and the government’s desire to lift subsidies on essential foods.

NEGATIVE EMOTIONS AND WORKPLACE
Over the last 20 years, research has revealed that emotions usually drive bad investment decisions.
Most investors are affected by human emotions when making investment decisions, even if they do not express them openly. Emotions are just as powerful in investment decisions as they are in any other decision.
Positive emotions such as self-confidence, challenge, and hope enhance decision makers’ propensity to be impulsive and motivated to invest, whereas negative emotions such as fear, anxiety, and stress do not.
Emotional influences on investment decisions might be difficult to overcome. The avoidance of investment is usually driven by a fear of negative outcomes, which exceeds the temptation of positive results.
Emotion-driven decisions, according to financial advisors, are generally undesirable when it comes to investing. We make bad decisions when we act on our emotions.
For example, in a country that is experiencing severe economic crisis and high levels of negativity among its citizens, the risk of investing in a project is extremely high because the economic environment is full of risks of loss, and the fear and anxiety that pervades individuals may have an impact on the workplace.
Moreover, it is evident that negative emotions directly affect productivity, whether in our personal or professional life. For example, if we look at the first pandemic responses across the globe, there was fear and confusion, employee’s motivation and productivity levels dropped exponentially.
In a study conducted by Google in 2012, “Project Aristotle,” psychological safety was found as the main driver for employee engagement, job satisfaction, and productivity. It works like a ripple effect.
The more stressed and anxious we are, the more we will negatively affect our surroundings which will eventually decrease productivity in the workplace.