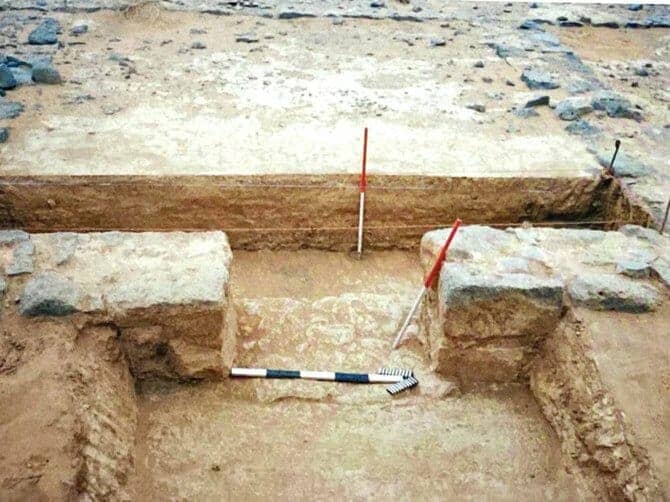 The archaeological site in Dawqara believed to have been used until the Ummayad era.

DUBAI: Dawqara, a place in Saudi Arabia’s Northern Borders region, has shown signs of civilization during the late Roman period.

Local media reports said one of the site’s most important artifacts is a square palace that was built from large volcanic stones. Its construction takes into consideration the straightness and solidity of pillars, linked by clay.

The palace’s door is located in the middle of the eastern wall and is 2.85 meters long. The palace comprises two parts: a yard that constitutes the largest part of the building and seven rooms on the western wall, each 4.5 meters wide, the reports said.

Some stone tools have also been found.

As of now, the history of the palace is not clear, as an archeological excavation is required to extract, study and compare artifacts.

But, according to preliminary studies, the palace was built in the pre-Islamic era and there is other evidence indicating that it was used until the Umayyad era.

Dawqara, located 40 kilometers west of At-Turaif, near a mountain known as Aqrun or Dawqara, is registered in a comprehensive archeological survey program.