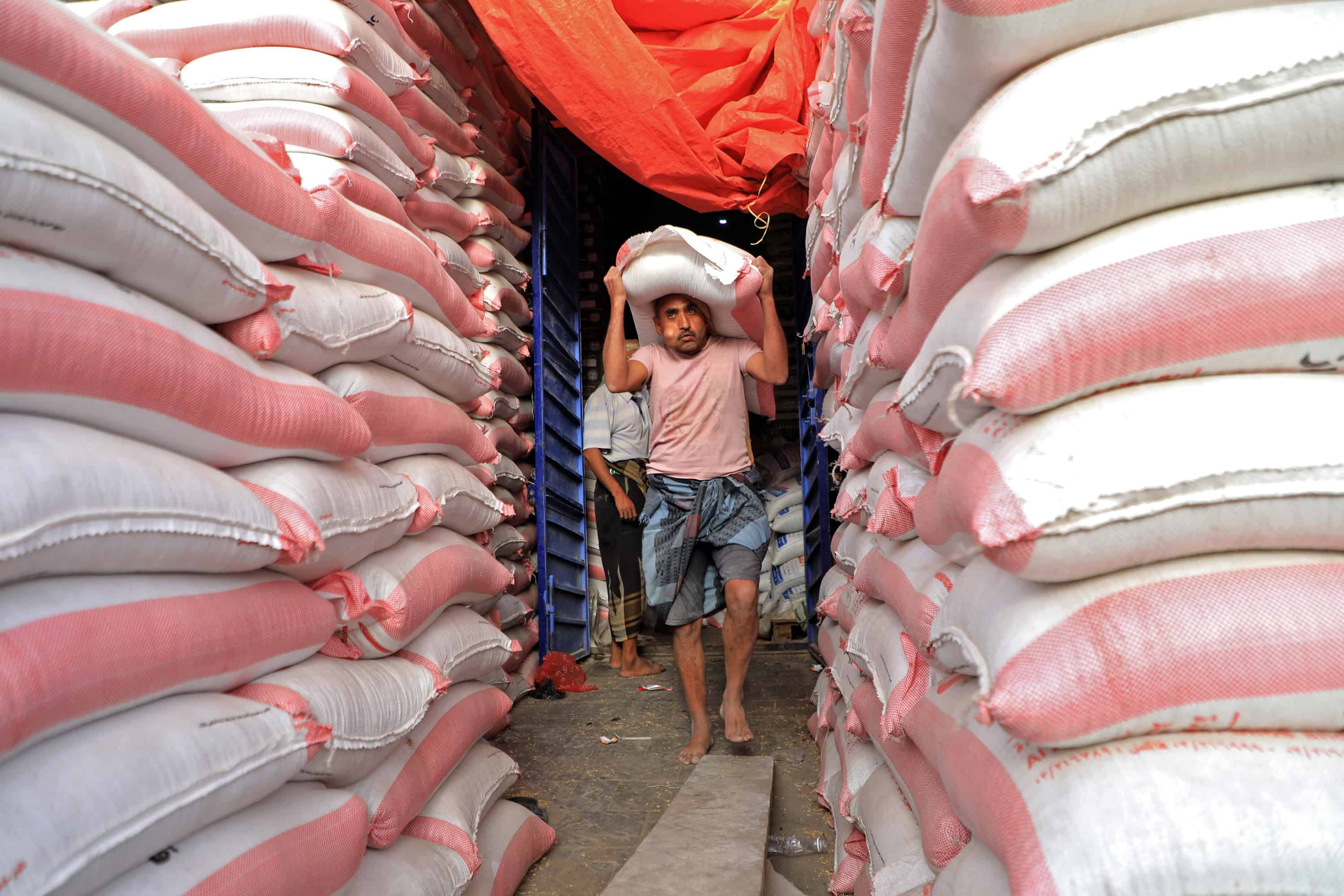 Yemeni workers carry bags of flour at a bakery in the capital Sanaa. (AFP File Photo)

The wheat fields of northern Yemen stretch into the distance but they aren’t enough to nourish a country where millions go hungry.

Already teetering on the edge of famine, war-ravaged Yemen fears a shortage of the staple food ingredient because of a different war — in Ukraine, which is one of the world’s major suppliers of the grain.

In a bustling Sanaa bakery, Mohammed al-Jalal and his staff sell small loaves of bread to customers carrying them away in red plastic bags.

“Flour is available on the market but we worry about shortages because of the war between Russia and Ukraine,” Jalal told AFP.

In Al-Jawf province, which borders Saudi Arabia, farmers are hard at work to harvest their crops before grinding the wheat and shipping it mainly to the capital, rebel-held Sanaa.

Most of Yemen’s roughly 30 million people will not be tasting this home-grown product, because the country depends almost entirely on food imports, with nearly a third of wheat supplies coming from Ukraine, according to the United Nations.

Across the Middle East and North Africa, people are struggling to secure even the most basic staples in view of soaring food and fuel prices triggered by Russia’s February invasion of Ukraine.

Jalal said authorities in Yemen “should support farmers so they can grow more wheat in our country”.

After more than seven years of civil war, the Arab world’s poorest country was already suffering what the United Nations called the world’s worst humanitarian crisis.

Ali al-Kabous, an importer and trader of wheat, fears that, “If the war between Russia and Ukraine continues, the price of wheat will increase here.”

Food prices in Yemen have already doubled since last year and the country’s years of fighting have led to an economic collapse.

As his staff unload dozens of white sacks filled with flour, Kabous points to a related concern. As global oil prices rise, so will transport costs, and “that will be an enormous burden on the people”.

The Iran-backed Houthis who control a large part of northern Yemen are fighting Yemen’s internationally recognized government which, since 2015, has been aided by a Saudi-led military coalition.

Accusing Iran of smuggling weapons to the Houthis — a charge Tehran denies — the coalition has enforced an air and sea blockade of rebel-held territory since 2016.

According to the Yemen Data Project, an independent tracker, the coalition has also carried out more than 25,000 air raids on Yemen since it intervened.

“Because of the enemy blockade but also the war in Ukraine, we should ensure food security from within the country,” Ali al-Khaled, spokesman for the rebel-controlled agency in charge of cereal production.

The UN’s Food and Agriculture Organization reported last year that total cereal production in 2020 was estimated at 365,000 tons, a figure which takes account of “conflict-related constraints” and which is almost 25 percent below the five‑year average.

As part of that agreement, the coalition agreed to ease its blockade to allow two weekly commercial flights into Sanaa. Fuel and more food shipments will also flow into the lifeline aid port of Hodeida, which is also rebel-held.

After more than 150,000 people were estimated to have died in the fighting, violence has dropped after the truce, which began on the first day of the Muslim holy month of Ramadan.

But the battle to survive goes on as Yemenis struggle to feed themselves.