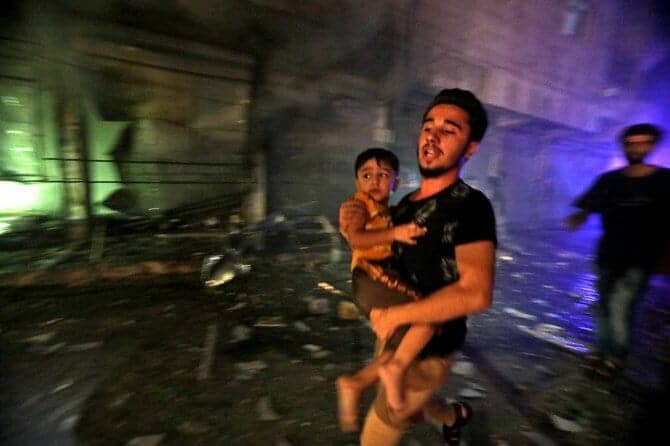 A man flees while evacuating a child in the aftermath of government forces’ bombardment on the rebel-held city of Al-Bab northwest of Aleppo in northern Syria, early on August 6, 2021. (File/AFP)

The artillery fire late Saturday hit a residential area in the south of the militia-dominated bastion of Idlib, the Syrian Observatory for Human Rights said.

The victims in the village of Qastoun in the Hama province were from the same family, it said.

The Idlib region is home to nearly three million people, two-thirds of them displaced from other parts of the country during the decade-long civil war.

It is dominated by Syria’s former Al-Qaeda affiliate, but rebels and other militants are also present.

A cease-fire deal brokered by regime ally Russia and rebel backer Turkey has largely protected the region from a new government offensive since March 2020.

But regime forces have stepped up their shelling on the south of the bastion since June.

Syrian President Bashar Assad took the oath of office for a new term last month, vowing to make “liberating those parts of the homeland that still need to be” one of his top priorities.

Syria’s war has killed around half a million people since starting in 2011 with a brutal crackdown on anti-government protests. (AFP)