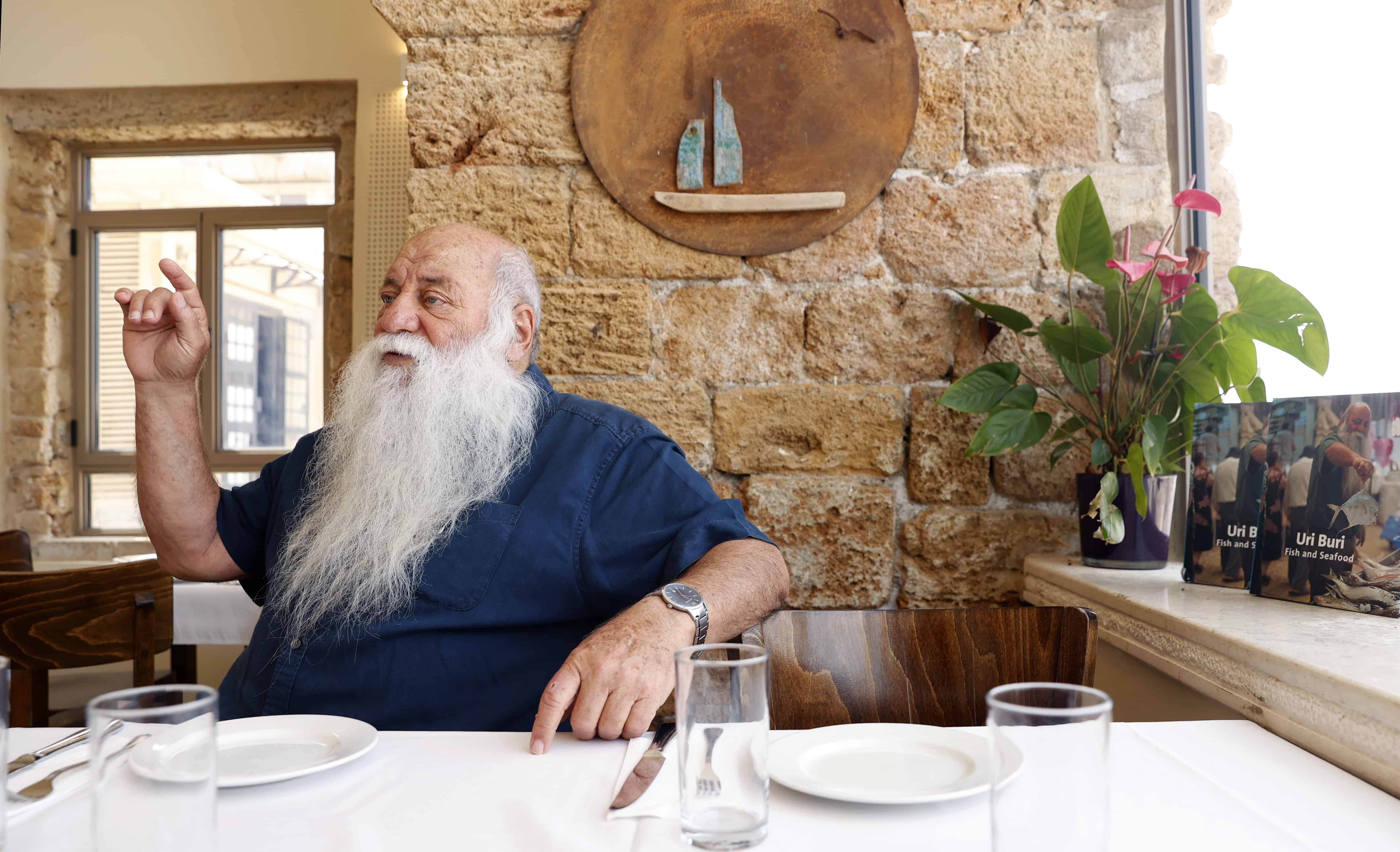 Israeli chef Uri Jeremias speaks during an interview at his seafood and fish restaurant "Uri Buri" in the northern Israeli coastal town of Acre on May 2, 2022. (Photo by JACK GUEZ / AFP)

On May 4 of last year, star Israeli chef Uri Jeremias was at a meeting of inter-faith leaders where his hometown of Acre was applauded as a “symbol” of Jewish and Arab co-existence.

Exactly a week after that gathering, rioters torched his seafood restaurant Uri Buri and a nearby luxury hotel, the Efendi, which Jeremias also owned. The attacks in the north-coast city were part of unprecedented intercommunal violence that shook Israel’s mixed communities one year ago.

He has always employed Arab Muslims, several of whom are now among his most senior staff.

Jeremias told AFP that he — and Acre’s community leaders generally — had grown “very satisfied” with what they believed were harmonious Jewish and Arab relations in the Old City, a UNESCO world heritage site where the remains of a Crusader town lie almost intact.

But Jeremias, known for his Father Time beard, said his hometown had failed to recognize its rising numbers of struggling youths, some with fraught family lives, and others out of school, who were vulnerable to radicalization.

“We didn’t see the transparent people, the people that were not so happy,” he told AFP.

The violence perpetrated by both Jews and Arabs in mixed Israeli cities in May, 2021 was sparked by a convergence of crises.

Palestinians had clashed with police across Israeli-annexed east Jerusalem, including at the sensitive Al-Aqsa mosque compound.

At the start of an 11-day war, Hamas Islamists who control Gaza fired rockets at Jerusalem on May 10 in response to the Al-Aqsa clashes, triggering Israeli retaliatory bombardment of the blockaded strip.

The intercommunal violence began the next day, ultimately leaving two Arabs and two Jewish people dead. Businesses from both communities, mosques and synagogues were targeted from Haifa in the north to Jaffa further south.

Jeremias has a long track record of hiring disaffected youths — Jewish and Arab — with no professional training to work in his restaurant and hotel, which he said made the Efendi and Uri Buri a target.

“I would be offended if I wouldn’t be the target,” as they wanted to harm mutual coexistence, he said. “I, in a way, was a symbol for it.”

He was supposed to be off on May 11. But given the crises unfolding nationwide he wanted to pass by the restaurant, if only for a bowl of soup to support his staff.

Jeremias recalled that a “threatening silence” hung over the Old City when he entered.

“Then they went away so I thought they have expressed their anger and now they are going home.”

Next, his phone rang. The Efendi was on fire.

By the time he arrived, his neighbors had extinguished the blaze, but an 84-year-old guest would eventually die from smoke inhalation and burns.

With the Efendi blaze contained, a man came running down the narrow cobblestone alley outside the hotel to report that Uri Buri was on fire.

Jeremias raced the 350 meters back to the restaurant and fought the blaze himself, with help from neighbors.

Police, the army and firefighters were deployed to crises elsewhere and did not respond: “Acre was naked,” Jeremias said.

As he watched his restaurant burn, Jeremias focused on the future.

“I said the next thing, tomorrow morning, we are going to look for an alternative place.”

Soon, Uri Buri was serving its famous salmon sashimi with wasabi sorbet from a temporary site at a grey concrete business park several kilometers from the old walled city, where tables remained in high-demand despite the drab surroundings.

While his food continued to find acceptance, Acre’s social problems did not. In the immediate aftermath of the violence Jeremias saw worrying signs of denial among local leaders.

“People were saying the rioters aren’t from Acre, and all kinds of excuses not to look at the problem in the face and say we are the problem.”

But he personally resolved to learn from what happened.

He stressed that maintaining calm in the city of roughly 50,000 people near Haifa could not be the sole responsibility of the security forces, or municipal authorities.

His restaurant re-opened in January at its historic site a few meters from the sea wall, and Jeremias voices optimism that despite warnings of copycat unrest during Ramadan, the Muslim holy month passed peacefully in Acre this year. Israel and the Palestinian territories saw violence elsewhere.

And, Jeremias stressed, complacency would be a mistake.

“We have to keep our hand on the pulse.”