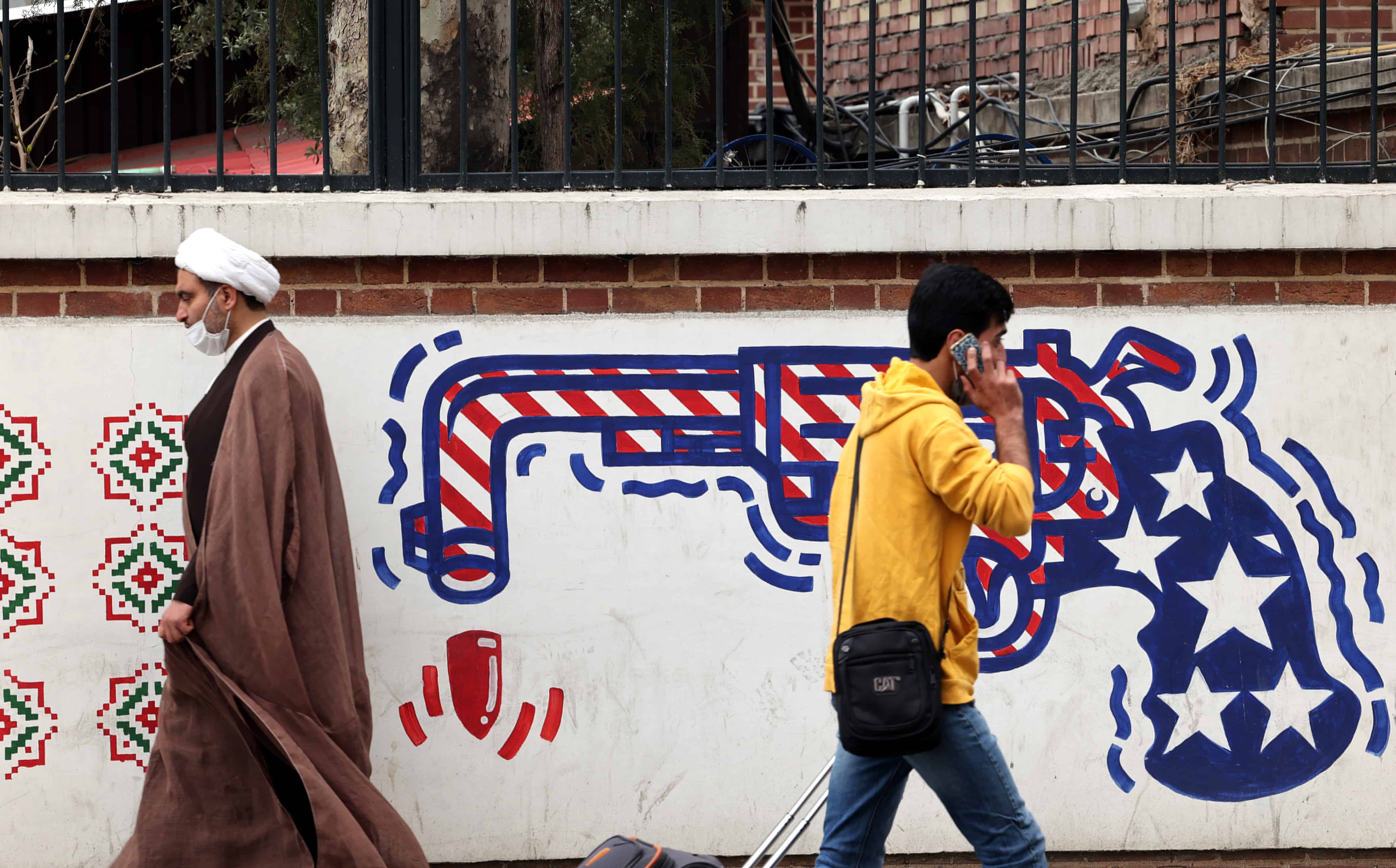 Iranians walk past an anti-US mural on a wall of the former United States embassy in the capital Tehran. AFP FILES PHOTO

Iran said Friday it will respond immediately to any “political” action at a looming meeting of the UN nuclear watchdog, after the US vowed to join Europeans in urging Tehran’s cooperation.

Iran’s warning comes as talks to revive a hobbled 2015 nuclear deal between the Islamic republic and world powers have been stalled since March and ahead of a pivotal meeting next week of the International Atomic Energy Agency’s board of governors.

The US said on Thursday that it will join Britain, France and Germany in seeking an IAEA resolution at that meeting, after the nuclear watchdog said Iran had not clarified questions about the presence of nuclear material found at three undeclared sites.

“Any political action by the United States and the three European countries in the IAEA would provoke without any doubt a proportional, effective and immediate response,” Iran’s Foreign Minister Hossein Amir-Abdollahian said.

He was quoted in a statement by his ministry, and made the comments in a telephone call with European Union foreign policy chief Josep Borrell, the coordinator of talks to restore the 2015 nuclear deal.

Iran and the IAEA had previously said that resolving the issue of the three sites is necessary for efforts to revive the deal.

The 2015 agreement gave Iran relief from crippling economic sanctions in exchange for curbs on its nuclear activities, measures aimed at preventing it from developing an atomic bomb. Iran has always denied seeking such a weapon.

The US unilaterally withdrew from the deal in 2018 under then President Donald Trump and reimposed biting sanctions on Iran, prompting Tehran to roll back its nuclear commitments and leaving the agreement hanging by a thread.

Amir-Abdollahian said the move by Washington and the three European states in favor of a resolution is “an act contrary to diplomatic practice, hasty and unconstructive.”

It will “make the process of negotiation more difficult and complicated,” the statement added.

Efforts to restore the 2015 deal were already mired by the US’ designation of Iran’s Islamic Revolutionary Guards Corps as a terrorist organization — Tehran insists that the designation must be removed, but the US says the blacklisting will remain.

Iran had warned Wednesday against “unconstructive action” at the IAEA and said that it would respond “firmly and appropriately.”

On Thursday US State Department spokesman Ned Price confirmed that Washington planned to join its three allies “in seeking a resolution focused on the need for Iran to fully cooperate with the IAEA.”

He said that the latest IAEA report raised “very serious concerns that Iran has failed to credibly respond” to the Vienna-based body’s questions.

He told his Russian counterpart “parties that obstruct the diplomatic path will be held responsible for the consequences of adopting any anti-Iranian resolution at the IAEA meeting”.

Russia, along with China, are also parties to Iran’s 2015 agreement.

On Friday Israeli Prime Minister Naftali Bennett warned the head of the IAEA that Israel was prepared to use its “right to self-defense” to stop Iran’s nuclear program.

He spoke after the nuclear watchdog’s chief Rafael Grossi met Bennett on Friday morning during a whirlwind visit that Amir-Abdollahian said contravened the IAEA’s principle of neutrality.

“The Zionists may only be able to dream of striking Iran – and if that happens, it will be a dream from which they will never wake up!”, he said on Twitter.

Israel and Iran are arch foes and the Jewish state is staunchly opposed to the 2015 nuclear agreement, perceiving it as a threat to its security.

Tehran blames Israel for killing several of its nuclear scientists, most recently Mohsen Fakhrizadeh in late 2020.