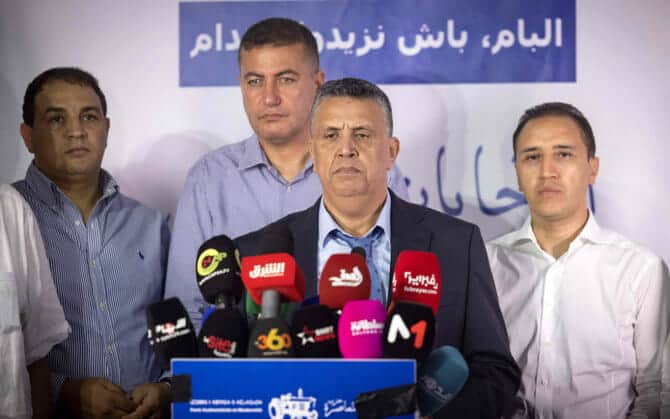 Abdellatif Ouahbi, president of Morocco's Authenticity and Modernity party (C), gives a speech after his party came in second in parliamentary and local elections, in Rabat on September 9, 2021. (AFP)

RABAT: Morocco’s moderate Islamist Justice and Development Party, which was thrashed at last week’s elections, on Sunday denounced “violations and irregularities” at the polls.
The party had headed Morocco’s governing coalition for a decade but saw its support collapse at the Sept. 8 vote, dropping from 125 of parliament’s 395 seats to just 13.
Local elections held the same day confirmed the party’s crushing defeat.
The party “denounces the violations and irregularities” at the polls, including “massive use of money,” “manipulation of reports” and “names crossed off the electoral lists or appearing twice,” it said in a statement following Saturday’s extraordinary session of the party’s national council.
These “forms of electoral corruption … led to the announcement of results that do not reflect the substance of the political map and the free will of the voters,” the statement added.
Interior Minister Abdelouafi Laftit has said the voting process took “under normal circumstances” apart from isolated incidents.
Morocco’s King Mohammed VI has named businessman Aziz Akhannouch to lead a new government after his National Rally of Independents, considered close to the palace, thrashed the Justice and Development Party, winning 102 seats.
On voting day, the Islamists had alleged “serious irregularities,” including “obscene cash handouts” near polling stations and “confusion” on some electoral rolls, with some voters finding they were not listed.
The National Rally of Independents has started coalition talks, but the Justice and Development Party has announced that it would switch to its “natural” position as the opposition.
The party “is at an important turning point,” outgoing secretary-general Saad-Eddine El-Othmani said Saturday at the party’s closed-door meeting.