Three rockets fired at US embassy in Baghdad: Iraqi army 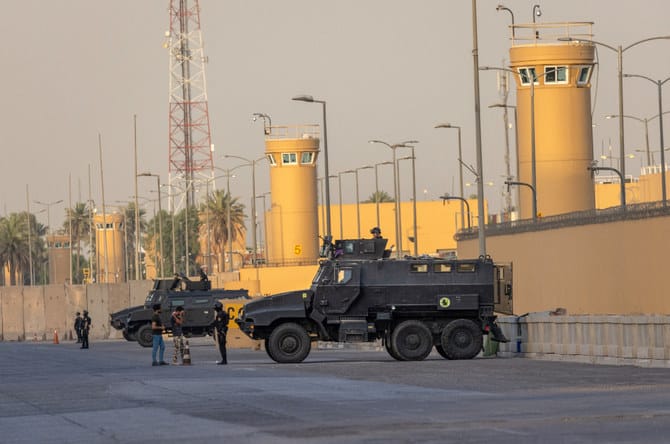 BAGHDAD: Three rockets were fired at the US embassy in Iraq early Thursday, the Iraqi army said, at the end of a day marked by rocket and drone attacks on bases hosting American forces in Iraq and Syria.

The embassy itself was not hit, the army said, but three nearby places in Baghdad’s heavily fortified Green Zone were.

A spate of recent attacks on US military and diplomatic facilities in Iraq has been blamed on pro-Iranian armed groups within a state-sponsored paramilitary force.

US forces, who have 2,500 troops deployed in Iraq as part of an international anti-Daesh group coalition, have been targeted almost 50 times this year in the country, but the last few days have seen an increase in the frequency of attacks.

On Wednesday, 14 rockets were fired at an airbase hosting American troops in the western province of Anbar, causing minor injuries to two personnel, the coalition said.

A Shiite militant group called Revenge of Al-Muhandis Brigade claimed responsibility and vowed to defeat the “brutal occupation,” according to the US-based SITE intelligence group, which monitors extremist groups.

The militant group is named after Abu Mahdi Al-Muhandis of Iraq’s Hashed Al-Shaabi paramilitary alliance, who was killed in a US drone strike early last year along with the revered Iranian general Qasem Soleimani, SITE said.

Late last month, the United States carried out airstrikes against pro-Iran fighters in both Iraq and Syria.

The rockets on Wednesday “landed on the base & perimeter” of the Ain Assad base, coalition spokesman Wayne Marotto tweeted, adding that local homes and a mosque were also damaged.

Iraqi security forces said the rocket launcher had been hidden inside a truck carrying bags of flour.

On Monday night, US forces shot down an armed drone above the embassy, according to Iraqi security officials.

American defense systems fired rockets into the air in the capital, said AFP reporters, with Iraqi security sources saying the salvos had taken out an explosive-laden drone.

Asked about the renewed violence, State Department spokesman Ned Price told reporters: “These attacks reflect and are representative of the threat that Iran-backed militias present fundamentally to Iraq’s sovereignty and to Iraq’s stability.”

Across the border in Syria, where pro-Iran fighters have fought alongside the Damascus regime in the decade-old civil war, Kurdish-led forces also reported attempted attacks near a coalition base.

The US-backed Syrian Democratic Forces said they repelled drone attacks near the base in the Omar oil field in the country’s east, in the second such operation in days.

“Our frontline forces against IS and coalition forces in the area of the Omar oil field dealt with drone attacks,” it said, adding that the drones had caused no damage.

The Syrian Observatory for Human Rights, a Britain-based war monitor with sources inside Syria, said pro-Iran militias had probably launched the drones from a rural area outside the town of Al-Mayadeen southwest of the oil field.

It was the second such attack in days, after the SDF reported “two unidentified rocket-propelled grenades landed on the western side of the Al-Omar oil field” late Sunday, which caused no casualties.

The United States had launched airstrikes the previous night against three targets it said were used by pro-Iran groups in eastern Syria and western Iraq.

The Observatory said at least five “Iran-backed Iraqi militia fighters” were killed in the strikes on the Syrian side of the border.