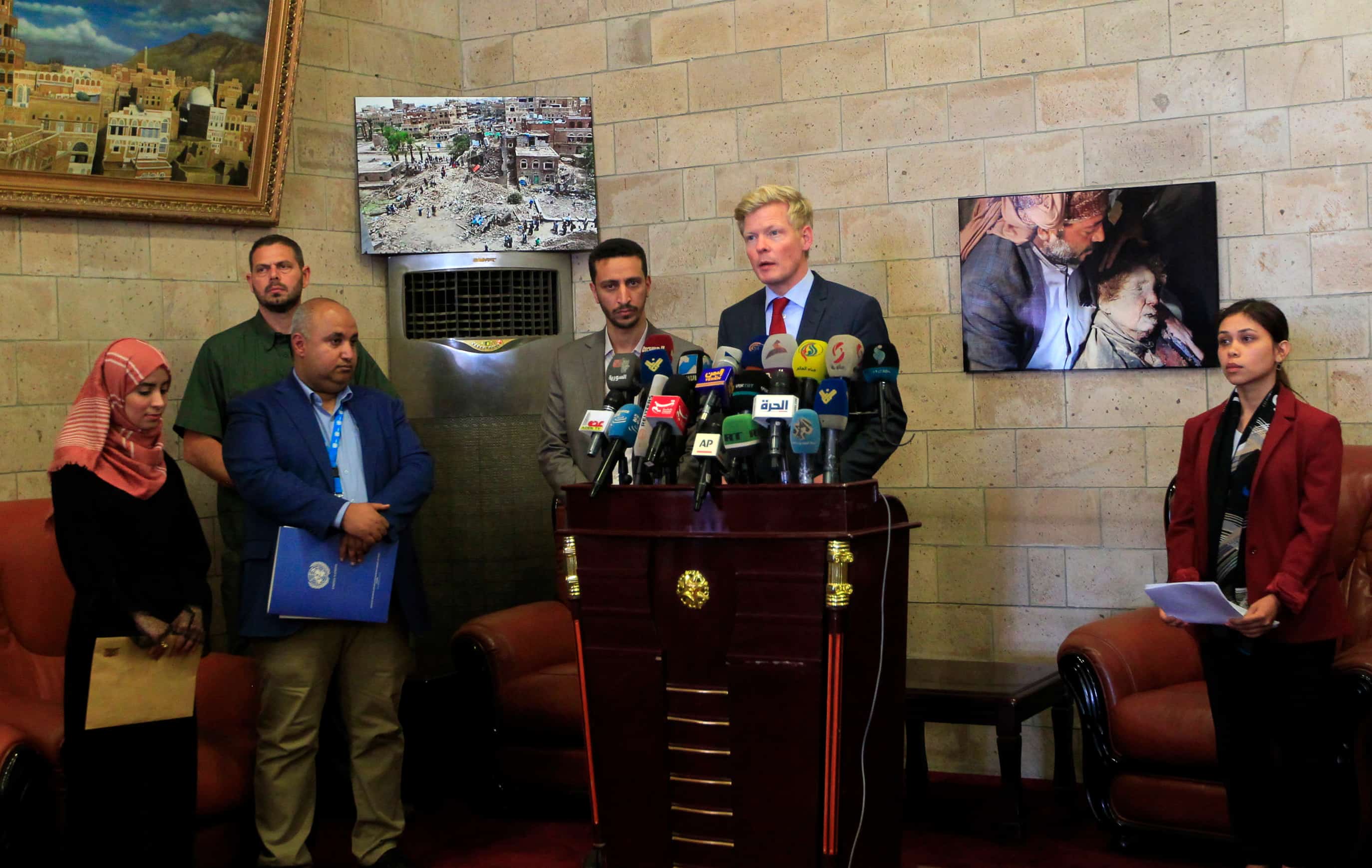 UN special envoy Hans Grundberg gives a press conference at Sanaa's international airport before his departure from the Yemeni capital, on April 13, 2022. - Grundberg visited the rebel-held Yemeni capital following an April 2 ceasefire that the country's warring parties have accused each other of violating. (Photo by MOHAMMED HUWAIS / AFP)

Yemen’s new leaders are “ready for war” should the latest push for peace with Houthi rebels fail, but a senior official told AFP they genuinely want the years-long conflict to end soon.

“Our first option is peace, but we are ready for war,” Abdullah al-Alimi said late Saturday in his first interview since being named to an eight-member leadership council tasked with running the country after President Abedrabbo Mansour Hadi stepped down earlier this month.

“We believe the council is in a position, with the coalition support, to score a decisive military victory,” Alimi told AFP in the Saudi capital.

Hadi’s internationally recognized government had been locked in conflict for seven years against the Iran-backed Houthis, who control the capital Sanaa and most of the north despite a Saudi-led coalition’s military intervention launched in 2015.

The war has killed hundreds of thousands directly or indirectly, and triggered what the United Nations calls the world’s worst humanitarian crisis, with millions on the brink of famine.

Hadi’s April 7 announcement handing power to the council came at the end of talks in the Saudi capital Riyadh that brought together anti-Houthi factions but were boycotted by the Houthis themselves.

The developments followed the start of a renewable two-month truce that has brought a rare respite from violence and spurred cautious hopes the war could finally end.

Hadi said the council would be tasked with “negotiating with the Houthis for a permanent ceasefire”.

“We hope the dire situation in Yemen will make people have a desire to leave personal and partisan interests behind in pursuit of peace,” said Alimi, formerly Hadi’s chief of staff.

He said council leaders are due to meet in the coming days with UN special envoy to Yemen Hans Grundberg, who last week visited Sanaa for the first time during his mandate and held talks with Houthi leaders.

After meeting Grundberg, the council will travel to Yemen to be sworn in, though Alimi refused to specify exactly where.

The new council has not yet decided how long it will give the Houthis to join talks, Alimi said.

The Houthis refused to participate in the negotiations in Riyadh, which they consider enemy territory, but Alimi said future talks could take place in a more neutral location such as Oman.

So far, however, the Houthis have been dismissive, denouncing the new council as “a desperate attempt to rearrange the ranks of the mercenaries” fighting in Yemen.

Analysts note the Houthis have said peace will only come once foreign forces leave and some believe they are only really interested in talks with the Saudis.

If the push for peace goes nowhere, the newly-aligned anti-Houthi forces are positioned to pursue “a concerted multifront campaign” against the rebels, provided the council’s diverse membership can hold together, said Peter Salisbury, senior Yemen analyst for the International Crisis Group.