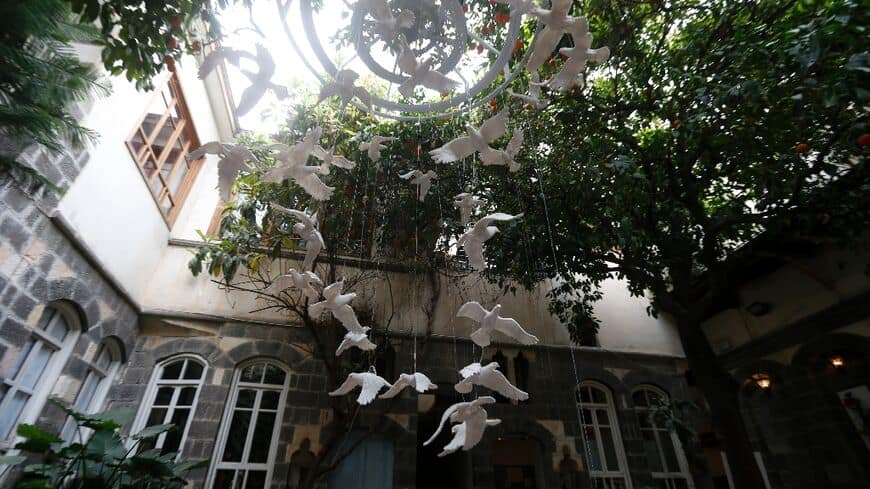 Buthaina al-Ali crafted the lifelike doves and told students to "hang them in a way they see fit."

Hundreds of ceramic doves are suspended over the streets of the Old City of Damascus, part of an art installation that had been set to debut before the start of Syria’s war.

The lifelike figurines crafted by Buthaina al-Ali, a professor at Damascus University’s faculty of arts, had been gathering dust in a basement since the outbreak of Syria’s conflict in 2011.

Eleven years on, the 15,000 ceramic birds are finally airbound, appearing in an exhibition curated by Ali’s students on the woes of Syria’s war.

“I had dreamt of decorating the centre of my city and hanging the doves in a crowded place for people to see,” Ali, 48, told AFP.

“But the war changed everything, and I had to postpone my dream all this time.

The exhibition in the Old City of Damascus, curated by 16 students from the faculty of arts, is titled: “Once upon a time, a window.”

The art on display deals with the displacement, hunger and helplessness wrought by the country’s bloody civil war.

“I finally suggested to my students that they take the doves and hang them in a way they see fit,” said Ali, who lost two family members to the conflict.

The students raised the doves in the courtyard of a traditional Damascene home.

The Kozah art gallery in the Old City and adjacent streets were also adorned with the ceramic figurines, some of which are fitted with small LED lights.

The doves are the centrepiece of the exhibition, which features other artworks by students.

The exhibition in the Old City of Damascus is curated by 16 students, and “sadness is the common factor” among the works, Ali said.

But for gallery owner Samer Kozah, the exhibition has turned the Old City into a scene from a story book.

“It’s a story displayed out in the open, allowing those who experience it to move from one tale to another,” he told AFP.

The doves have been incorporated into student artworks, including an installation by 24-year-old Hammoud Radwan.

His piece, titled “A Continued Disappearance”, sees the doves placed beside portraits of the artist’s friends who have left Syria in search of a brighter future abroad.

“The faces aren’t in Syria anymore,” Radwan told AFP, pointing to the pictures.

“The pigeons fly beside them to express dispersal,” he added.

Since 2011, the war in Syria has killed almost half a million people and forced nearly half the country’s pre-war population from their homes, according to the Britain-based Syrian Observatory for Human Rights.

In a narrow alley in the Old City, empty plates tied to ceramic pigeons clatter against one another above an empty wooden table.

“The (empty) table represents our table, and the plates resemble our empty plates,” the 25-year-old told AFP.

Gulnar Sarikhi hung the doves upside down as a symbol of the Syrian people’s helplessness — “I could not imagine the doves flying,” she said

In another installation, 300 pigeons appear suspended in mid-flight on their way out of an abandoned house.

“They are similar to the homes of some Syrians” who had to flee the ravages of war, said Zeina Taatouh, who created the work.

Students Raneem al-Lahham and Hassan al-Maghout locked the birds inside cages in their installation.

Gulnar Sarikhi, another art student, hung the doves upside down, with a knot tied at their feet.

Sarikhi chose the title “Impotence” for her piece, which represents the helplessness of Syria’s people.

“I could not imagine the doves flying,” she said.

“I saw them hanging by their legs, embodying the pain and exasperation which we can do nothing about.”