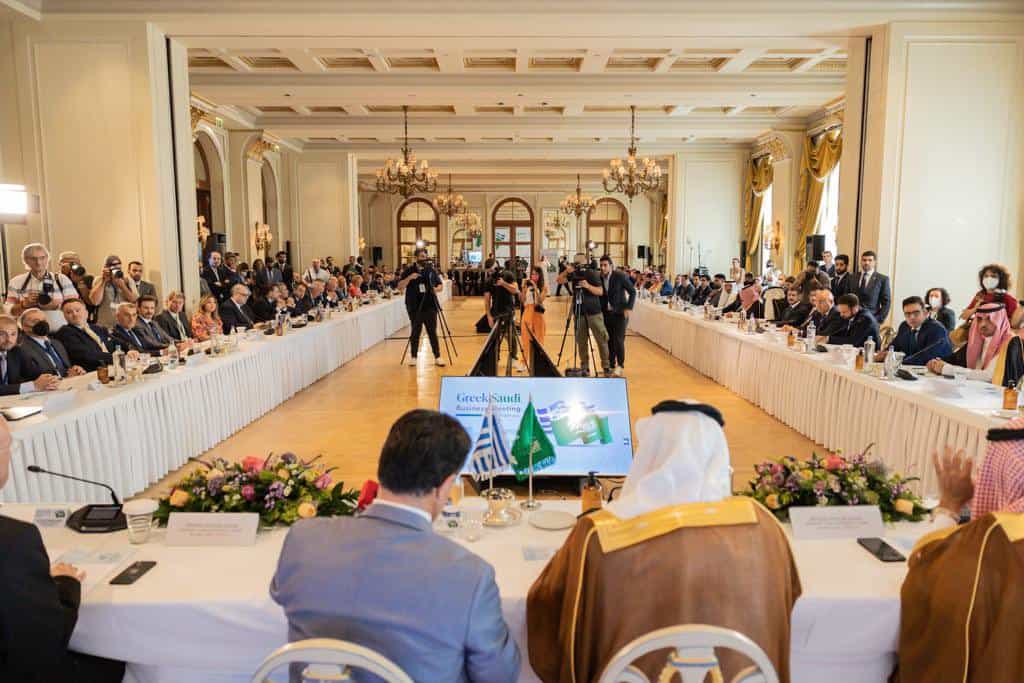 In total, 243 business-to-business meetings were held between companies of both countries.

A total of 21 investment agreements in the fields of logistics and transportation, renewable energies, manufacturing, environment services, aquaculture, defense, import and export, engineering and agriculture were signed in Athens by Wednesday by the Ministry of Investment of Saudi Arabia (MISA) and private sector companies with their Greek counterparts.

The meeting included presentations by both Greek and Saudi entities. From Greece, representatives from the leading global industrial and energy company Mytilineos highlighted opportunities available to Saudi investors. Saudi officials from Ajlan & Bros Holding Group, one of the Middle East’s largest private sector conglomerates, showcased areas of investment available in the Kingdom in renewable energy and infrastructure.

A total of 32 representatives from Greek companies, chambers of commerce and trade associations attended the event, taking part in B2B and G2B meetings to explore mutually beneficial investment opportunities.

Greek investment in Saudi Arabia has continued to grow over recent years across several sectors, from professional, scientific and technical activities, through manufacturing and construction, to finance and insurance.

The partnerships forged during the Athens meeting underscore the deepening and widening of investment relations between Greece and Saudi Arabia.

In September 2021, the launch of the Joint Saudi-Greek Business Council in Athens aimed at establishing closer cooperation between private sector actors in the two countries. In March 2022, the inaugural Saudi-Greek Business Forum in Riyadh saw the participation of 43 Greek companies and 110 Saudi companies and featured a flurry of activities across a range of sectors including renewable energy & hydrogen, maritime shipping & logistics, tourism & hospitality, and construction & infrastructure.

Saudi Arabia and Greece are implementing a joint project to build a submarine cable and data line to connect the two countries and are collaborating closely to leverage synergies in such key sectors as tourism and shipping.

Saudi Arabia has seen strong growth in foreign direct investment in recent years as the Kingdom’s economic reforms have unlocked a broad range of opportunities for international investors. Last year net FDI growth increased by an unprecedented 257.2%, with inflows totaling almost $20bn for the year – the highest they have been for a decade.

A total of 16 business agreements and cooperation memoranda were signed between Greece and Saudi Arabia on Wednesday alone before Saudi Crown Prince Mohammed bin Salman ended his two-day visit to the country.

The Greek minister added that the number of agreements signed at the Greek-Saudi Business Meeting on Wednesday – during the first official visit to Greece of Crown Prince of Saudi Arabia Mohammed bin Salman bin Abdulaziz Al Saud – “is undoubtedly a success and encouraging in that we are moving in the right direction.”

Among the agreements signed was one for the construction of a submerged cable system to transfer data, worth nearly US$1 billion, called East to Med Data Corridor (the EMC project), and one for energy that covers conventional and renewal energy sources worth US$2.6 billion.

In total, 243 business-to-business meetings were held between companies of both countries.

Attending the signing event were Greek and Saudi ministers and executives from companies in both countries.