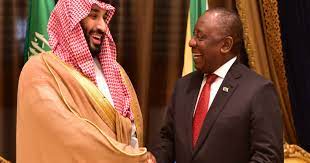 Saudi Arabia and South Africa are looking to boost trade after a year of slump that saw imports from the kingdom fall to a four-year low in 2020.

The two countries have committed to strengthen their ties by working more closely in sectors such as infrastructure development, agriculture, mining and energy, tourism, and other areas.

“Despite the progress in our relations, we look forward to expanding the scope of our cooperation with South Africa in line with our respective capabilities,” said Chairman of the Saudi-South African Business Council Hisham Al-Amoudi. “The Saudi market has the capacity to host more South African investments, namely in mining, health care, small to medium enterprises (SMEs), agriculture and information technology, among others.”

Al-Amoudi said that a number of measures must be taken to achieve this, including activating the agreements and memorandum of understanding (MOUs) signed between the two countries, increasing activities of the Saudi South African Business Council, “developing programs that support our goals, and enhancing our overall dialogue on topics of mutual interest.”

South African President Cyril Ramaphosa made a state visit to the Kingdom in 2018 to meet King Salman and the Crown Prince Mohammed bin Salman to assess relations, focusing primarily on strengthening economic linkages between South Africa and Saudi Arabia.

Saudi Arabia and South Africa are both G20 countries, and the Crown Prince has met with the South African President on the sidelines of the G20 Summit in Argentina. “Saudi Arabia is also a large investor in South Africa, especially in the area of renewable energy,” said Al-Amoudi.

“We seek to work with our South African friends to facilitate the access of Saudi products to the South African market, and enhance the Saudi-South African balance of trade,” he said.