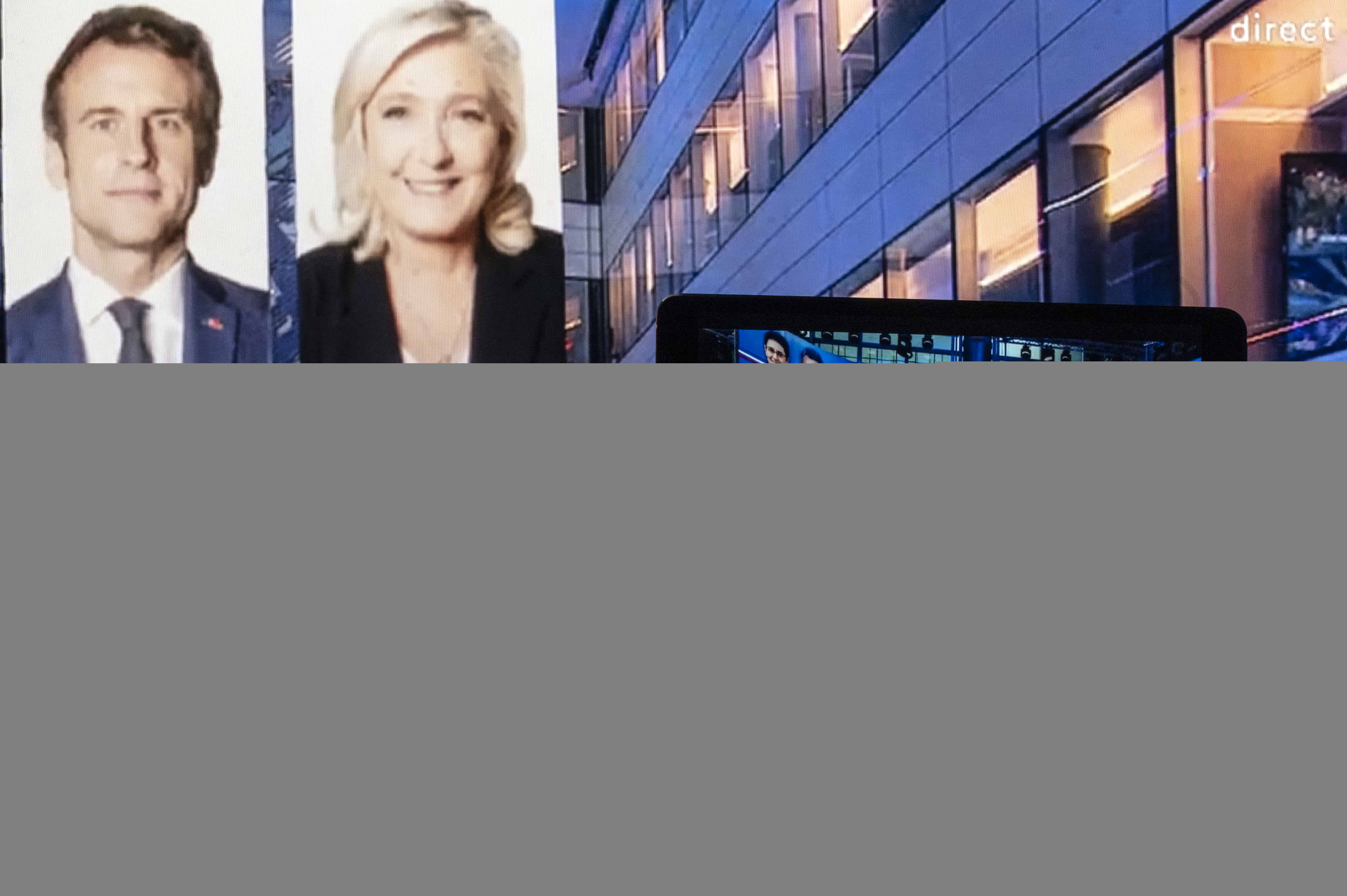 This photograph taken in Toulouse, southwestern France on April 10, 2022 shows screens displaying TV shows showing the projected results after the close of polling stations in the first round of the French presidential election. (Photo by Lionel BONAVENTURE / AFP)

President Emmanuel Macron is in no way guaranteed to sweep France’s presidential run-off against far-right rival Marine Le Pen, facing disaffection among swathes of voters unimpressed with his record over the past five years.

Polls show the run-off will be far from the walkover he enjoyed in the same match-up 2017, when Macron won 66 percent to Le Pen’s 34 percent.

This time, a series of polls have suggested Macron would win 51 to 54 percent against 46 to 49 percent for Le Pen, with margins of error making a Le Pen victory possible.

“This election, we’re going to have to go out and earn it, because it’s not a done deal,” government spokesman Gabriel Attal told France Inter radio on Monday.

The incumbent president called for broad support after coming out on top in Sunday’s first-round vote, “extending his hand” in particular to the millions who voted for far-left leader Jean-Luc Melenchon who came third.

Melenchon capitalized on huge enthusiasm from young voters in particular, walking away with one-third of those 18 to 24 years old, to secure a close third-place finish that left the traditional left — Socialists, Greens and Communists — in tatters.

“It’s undoubtedly a success, he improved his score even though he lost votes to the Communists,” said political scientist Simon Persico at Sciences Po university in Grenoble.

On Sunday night a jubilant Melenchon insisted that “not a single vote should go” to Marine Le Pen, the National Rally leader who once again qualified to face Macron in a run-off on April 24.

But he noticeably did not call on his France Unbowed base to swing behind Macron, and several post-vote polls indicated that his voters are sharply divided for the second round.

One-third say they will vote Macron, but one-third indicate they would turn to Le Pen, with the remainder abstaining.

Valerie Pecresse, the conservative candidate who won less than five percent of the vote, also refrained from explicitly urging her voters to back Macron although she said she would herself cast her ballot for him.

Polls have suggested that up to half her base could be tempted by Le Pen, who has sought to moderate her image in recent months to appeal to the traditional right.

Overall, the far-right veteran, fighting her third presidential campaign, scored highest among voters aged 25-34, at 30 percent, and those 35-49 (28 percent), according to a Harris Interactive survey.

Macron did best only among voters aged 50 and older, though that demographic is historically more likely to go to the polls.

“Le Pen’s image is very different from the one she had in 2017. She seems much less extreme and more acceptable to a large part of the French population,” analysts at the bank ING said in warning of potential markets volatility over the next two weeks.

Beyond the far left, Macron is also appealing to the roughly 25 percent of registered voters who did not vote at all, well above the 22.3 percent who stayed home in the first round five years ago.

Turnout tends to slip several percentage points in the second round, injecting fresh volatility into the race.

It’s far from certain, however, that the abstentionist bloc of mainly young and working-class French will want to support a reformist president who is promising to raise the retirement age to 65 from 62.

The former investment banker has struggled to shake off his label as “president of the rich,” with critics still seething over his abolishing a wealth tax on individuals while also cutting corporate taxes.

He also pushed through reforms making it easier to hire and fire workers, one of several pro-business moves that fueled the fiery “yellow vest” protests against his government in 2018 and 2019 — which Le Pen is likely to seize on.

“She has reached out to the left leaning side of the electorate. She will challenge Macron on these issues that have proven complicated for him,” said Tara Varma, a Paris-based researcher at the European Council of Foreign Relations.

Analysts say many of those protesters have turned to Melenchon or Le Pen, or refused to cast a ballot this time around.

“I was hoping that he would make the second round. The environment and social justice are going to absent in the run-off, and people are unhappy about it,” Pierre-Dahomey Nehemy, a 35-year-old Melenchon supporter said it that France Unbowed headquarters in Paris on Sunday night.