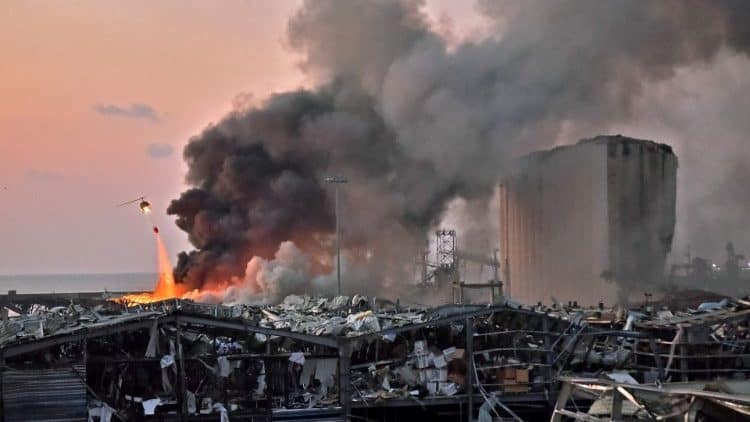 Lebanon marked two years Thursday since a massive explosion ripped through Beirut — a grim anniversary marked by angry protests and the dramatic collapse of blast-damaged grain silos in a cloud of dust.

The 2020 disaster, one of history’s biggest non-nuclear explosions, killed more than 200 people and decimated vast areas of the capital after a stockpile of haphazardly stored ammonium nitrate caught fire.

Thousands of protesters, many of them victims’ relatives, are furious that no state official has yet been held accountable over the tragedy and an investigation into the mega-blast has been stalled amid political interference.

At 6:07 pm (15:07 GMT), the moment of the explosion, demonstrators held a moment of silence, before breaking into applause.

Sirens rang out to remember the firefighters killed in the blast.

“When the explosion happened, we thought the truth would surface within five days,” said university student Aya Qassem, joining one of multiple protest marches that converged at the port.

“But two years have passed, and we know nothing.”

The huge explosion was a nightmarish moment in the chaotic history of Lebanon, which is mired in its worst-ever economic crisis marked by blackouts, runaway inflation and widespread despair.

Beirut’s heavily damaged harbourside grain silos have become a grim reminder of the explosion, and the collapse of part of the structure Thursday dramatically brought back the trauma.

“I’m seeing the same sight, from almost the same place, after two years,” said Lama Hashem, a 30-year-old who took part in the protest march, holding back tears.

“It’s traumatic,” she added, as demonstrators around her raised red-stained Lebanese flags and mock coffins in a display of mourning.

Thousands marched towards the wreckage of the silos, where fermenting grain has been smouldering in the blistering summer heat issuing clouds of smoke, after partially collapsing last week.

“I hope that seeing the silos fall will give people the will to fight for justice,” said Tatiana Hasrouty, who lost her father in the blast.

“It is our right to know the truth,” Mirelle Khoury, whose son was killed in the explosion, said in a statement on behalf of the victims’ families.

The 2020 blast was felt as far away as Cyprus and sowed the kind of devastation normally caused by wars and natural disasters.

It further scarred the crisis-tested population and accelerated a massive exodus that recalls the flight from the 1975-1990 civil war.

Lebanon’s ruling class, accused of misrule, graft and gross negligence, has however clung firmly to power even as the people endure shortages of fuel, medicines and clean water.

“This ruling class is killing us every day,” Hasrouty said.

“If we did not die in the blast, we are dying of hunger, from a lack of basic human rights.”

The government in April ordered the silos’ demolition, but this has been suspended, partly because of objections from victims’ relatives who want them preserved as a memorial.

Even though parts of the silos are collapsing, stable sections should be preserved, relatives of blast victims said in a statement on Thursday.

“We will do everything in our power to preserve and protect… the silent witness,” the statement said.

“The silos are our memory,” said Wafaa Zaher, a 60-year-old whose son died at the port two years ago.

The blast probe is also at risk of falling apart, as officials close to the powerful Hezbollah movement have used lawsuits to curtail the work of lead investigator Tarek Bitar.

A judicial official close to the investigation said Bitar’s work had been paused since December 23.

Hezbollah, which has repeatedly accused Bitar of bias, on Thursday urged a “fair” probe.

UN chief Antonio Guterres reiterated his call for an “impartial, thorough and transparent investigation into the explosion”.

UN experts and groups including Amnesty International and Human Rights Watch have again appealed to the United Nations to send a fact-finding mission, saying it was “now, more than ever, clear that the domestic investigation cannot deliver justice”.

Aya Majzoub of HRW said an international investigation “may be the only hope for the millions of Lebanese people… to get the answers they deserve”.