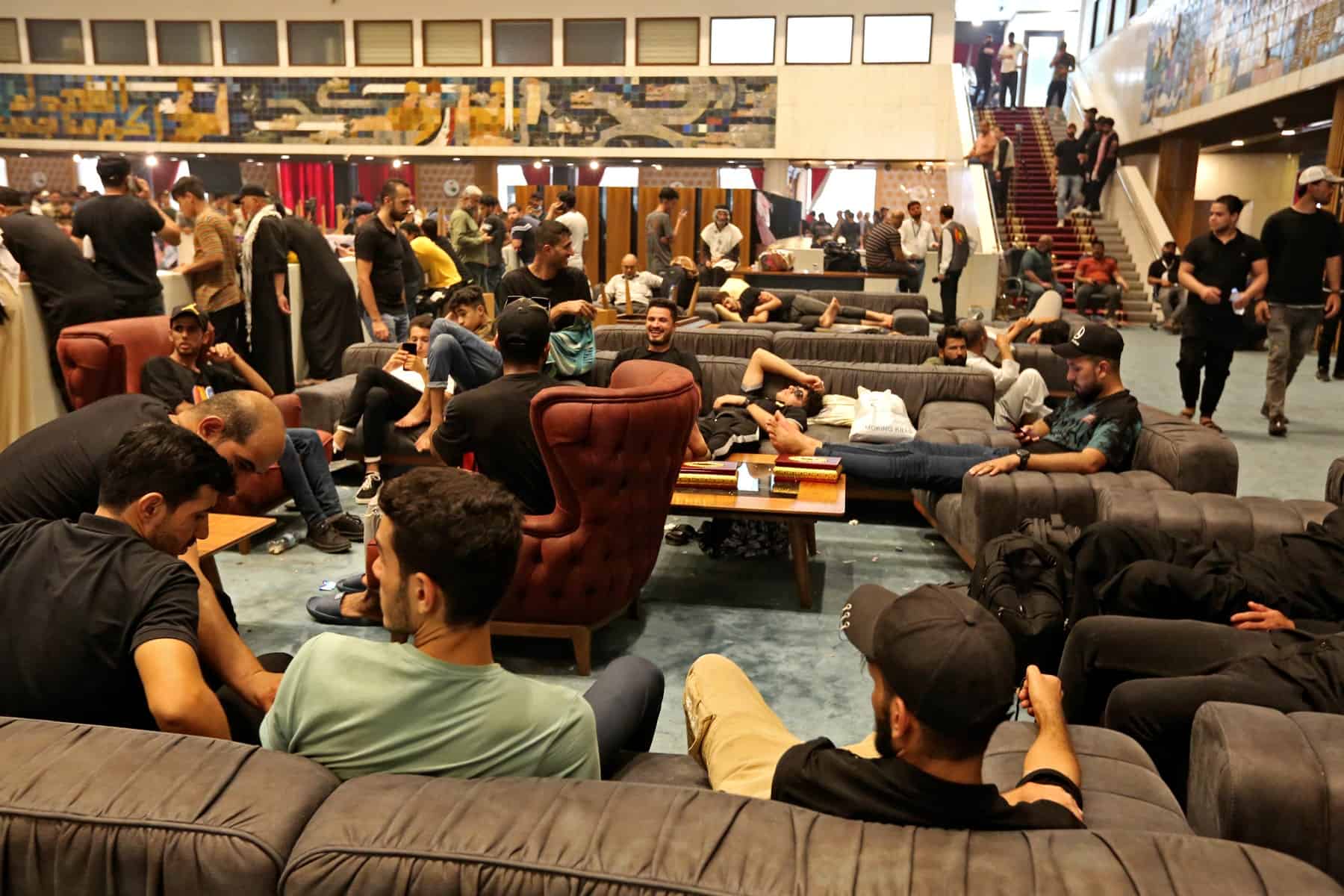 Supporters of Moqtada Sadr gather inside the parliament. (AFP)

A top official from Iraq’s Sadrist movement called Tuesday on followers who have occupied parliament for four days to move their protest outside, as calls mount for dialogue between political rivals.

Supporters of powerful preacher Moqtada Sadr — whose political bloc in October won the largest share of seats in elections — stormed parliament on Saturday to protest against a rival Shiite faction’s pick for prime minister.

Nearly 10 months on from the elections, the oil-rich country still has no government and no new prime minister or president.

A standoff pits the two key factions of the Shiite political scene, between the populist Sadr with a devoted following of millions, and the powerful pro-Iran Coordination Framework.

While Sadr’s bloc resigned in June ostensibly in a bid to unblock the impasse, the situation has only deteriorated since then.

Mohamed Saleh al-Iraqi, a senior Sadr loyalist, called on protesters to “leave parliamentary headquarters” and join fellow Sadrists at an “encampment in front of and around the building”.

The announcement caused confusion in parliament, where some officials said the instructions were to only leave the main chamber and another meeting room, but that protesters could stay on in the large entrance hall.

On Tuesday afternoon, hundreds of protesters continued to lounge in armchairs and on carpets in parliament, an AFP journalist said.

In the surrounding gardens, protesters have erected tents, while mobile food stalls have sprung up to serve food and drinks. Cows were tied up to a post and a butcher manned a sand.

Protesters should leave the inside of parliament within 72 hours, Sadr ally Iraqi added, in a message on Twitter.

“The pursuit of the sit-in is very significant because it will solidify your demands,” he said, recommending that protesters rotate their presence at the site.

He also announced that a major prayer rally would take place on Friday in the Green Zone, home to parliament, other Iraqi institutions and foreign embassies.

The Coordination Framework is a grouping that includes former prime minister Nuri al-Maliki, a long-standing foe of Sadr, and the Hashed al-Shaabi, a former paramilitary network now integrated into the security forces.

Thousands of Coordination Framework supporters have held counter-protests in Baghdad against the occupation of parliament, decrying what they call an attempted coup.