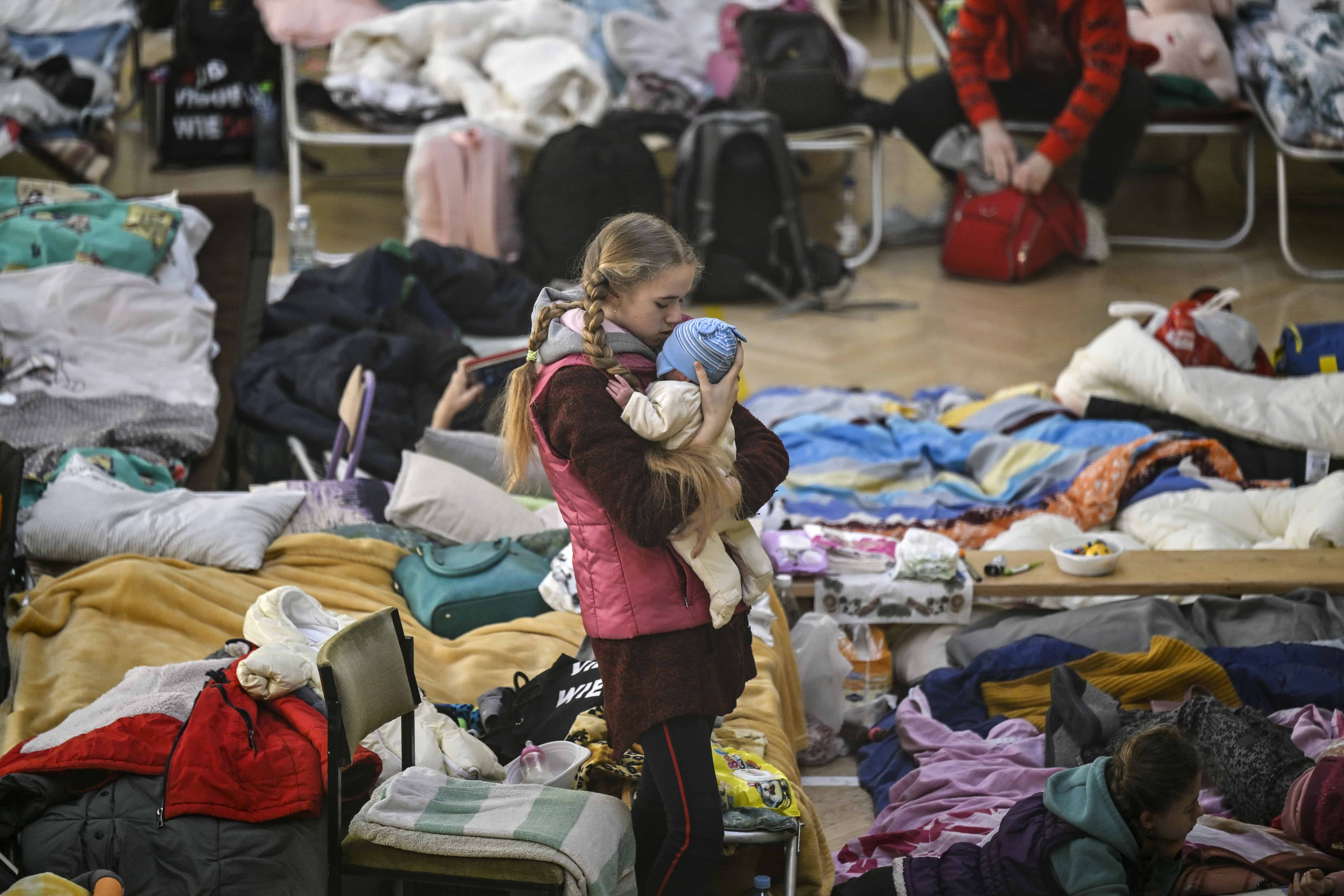 A girl holds her sibling in a temporary shelter for Ukrainian refugees in a school in Przemysl, near the Ukrainian-Polish border on March 14, 2022. AFP

Russia on Monday unleashed a barrage of air strikes on cities across Ukraine as the warring sides traded blame for a deadly attack in a pro-Moscow separatist region — but made little headway in ceasefire talks.

With Russian forces threatening to take “full control” of several major cities, the fourth round of talks failed to deliver a breakthrough on the 19th day of the invasion, with negotiations to resume on Tuesday.

On the international front, high-ranking US and Chinese officials met for a marathon seven hours of talks, as the United States raised the alarm about a possible Chinese “alignment” with Russia — which the West wants to isolate over the invasion of its ex-Soviet neighbor.

The talks, which follow reports that Moscow asked Beijing for military and economic assistance as its troops struggle to make ground in Ukraine, were described by a senior US official as “very candid” — diplomatic code for a feisty exchange.

The United Nations estimates almost 2.8 million people have fled Ukraine since President Vladimir Putin launched a full-scale land and air assault on February 24. It has recorded more than 600 civilian deaths, including dozens of children, though the true toll could be far higher.

Putin’s effort to control the narrative over the deadly conflict suffered a blow Monday when a dissenting employee entered the studio during Russia’s most-watched evening news broadcast, holding up a poster saying “Stop the war. Don’t believe the propaganda.”

An opposition protest monitor says the woman, an editor at the tightly-controlled state broadcaster Channel One, was detained following the highly unusual breach of security.

And on the opposing side of the information war, congressional leaders in Washington announced that Ukraine’s President Volodymyr Zelensky would deliver a high-profile virtual address to both chambers on Wednesday — as US lawmakers seek to ratchet up pressure on the White House to take a tougher line over Russia’s invasion.

In the Ukrainian capital — now hemmed in on two sides and drained of more than half its three million residents — the latest Russian air strikes killed at least two people.

“They say that he is too severely burned, that I won’t recognize him,” sobbed Lidiya Tikhovska, 83, staring at the spot where a paramedic said the remains of her son Vitaliy lay.

“I wish Russia the same grief I feel now,” she said, tears rolling down her cheeks as she clung to her grandson’s elbow for support.

A correspondent for Fox News — Britain’s Benjamin Hall — was injured and hospitalized while reporting on the city outskirts, the network said, a day after a US journalist was shot dead in Irpin, a frontline Kyiv suburb.

As Russian forces shelled Kyiv, Moscow-backed separatists said fragments from a shot-down Ukrainian Tochka-U missile ripped through the center of the eastern city of Donetsk, killing 23 people. Moscow called it a “war crime” and rebels published images of bloody corpses strewn in the street.

But Ukraine’s army denied firing a missile at the city, with Ukrainian army spokesman Leonid Matyukhin saying in a statement: “It is unmistakably a Russian rocket or another munition.”

At the other end of the country, in a village outside the western city of Rivne, local authorities said nine people died and another nine were injured when Russian forces hit a television tower.

At the United Nations, Secretary-General Antonio Guterres sounded the alarm once again on the dangers of a possible showdown between atomic powers — a prospect “once unthinkable” but “now back within the realm of possibility.”

And he warned the war already risked triggering a “meltdown of the global food system” — with both Ukraine and Russia vital suppliers of wheat to dozens of the world’s least developed countries.

During its videoconference talks with Russian representatives, Ukraine said it was demanding “peace, an immediate ceasefire and the withdrawal of Russian troops”.

Kremlin spokesman Dmitry Peskov told reporters Putin had ordered his forces “to hold back on any immediate assault on large cities because the civilian losses would be large”.

However, he said, Russia’s defense ministry “does not rule out the possibility of putting large cities, which are already almost fully encircled, under its full control”.

Russia’s forces had earlier focused on eastern and southern areas of Ukraine — home to more ethnic Russians — but in recent days have moved to the country’s center.

But Russian troops have kept up their siege of southern Mariupol, where officials said nearly 2,200 people have been killed.

In a glimmer of hope for residents of the besieged port city, more than 160 civilian cars were able to leave along a humanitarian evacuation route Monday after several failed attempts.

In Kyiv only roads to the south remain open, according to the Ukrainian presidency. City authorities have set up checkpoints, and residents are stockpiling food and medicine.

The northwestern suburb of Bucha is held by Russian forces, along with parts of Irpin, Ukrainian soldiers told AFP, although the Russians are encountering resistance east and west of the capital according to AFP journalists on the scene.

Ukraine’s leader Zelensky on Monday renewed his call for NATO to impose a no-fly zone over his country — a day after at least 35 people were killed in Russian airstrikes near the border with NATO member Poland.

“If you do not close our sky, it is only a matter of time before Russian missiles fall on your territory, on NATO territory, on the homes of NATO citizens,” Zelensky warned in a video address.

President Joe Biden and America’s NATO allies so far have consistently refused, arguing that any attempt to establish a no-fly zone would place them in direct conflict with nuclear-armed Russia.

Instead, Washington and its EU allies have poured funds and military aid into Ukraine and imposed unprecedented economic sanctions on Russia.