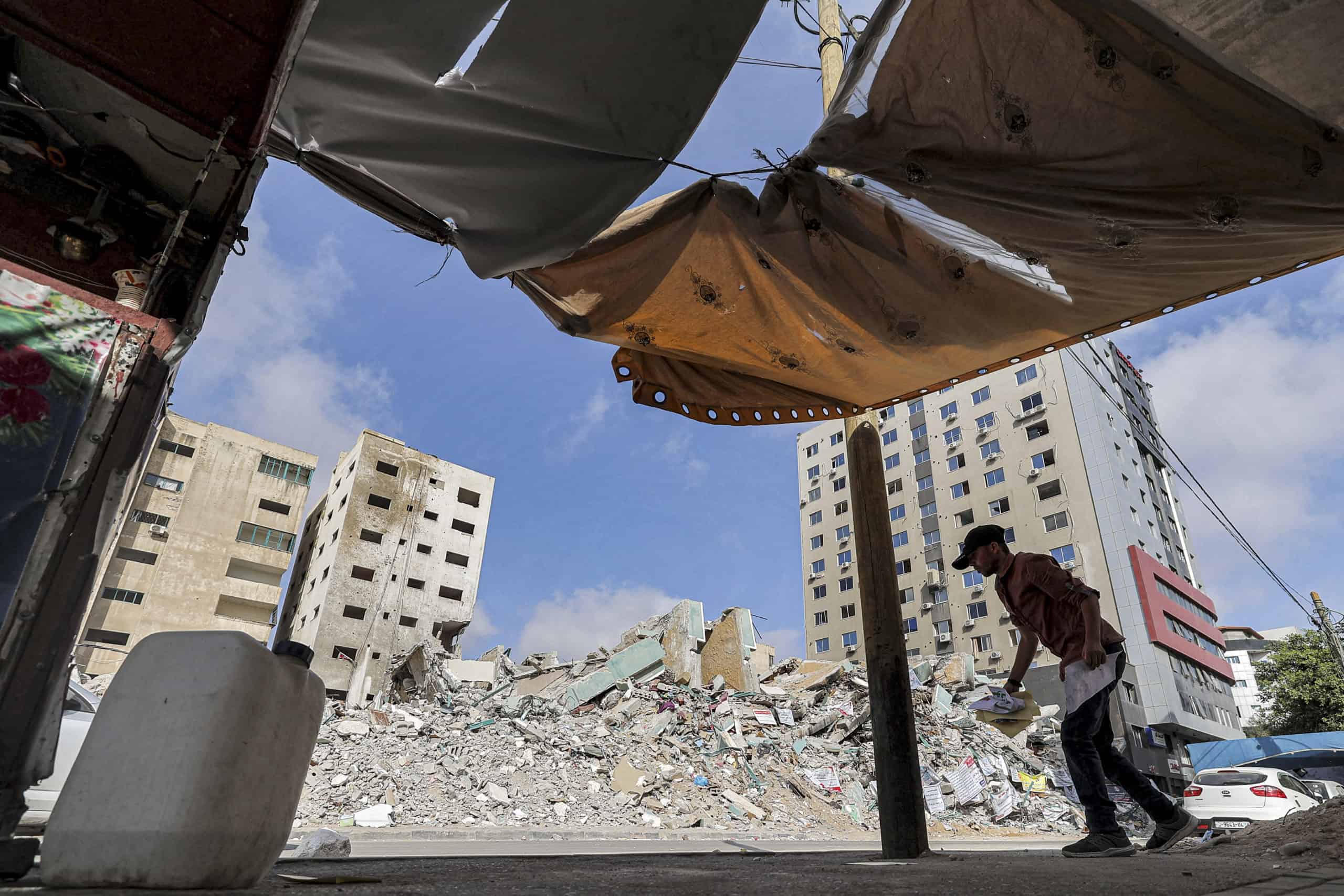 A Palestinian holding fragments of papers walks past the rubble of a building destroyed during the May 2021 conflict between Hamas and Israel in Gaza City's al-Rimal neighbourhood, on June 10, 2021. (Photo by MOHAMMED ABED / AFP)

Her eyes glued to a cellphone photo of her sister and four children killed in an Israeli strike on Gaza, Ola lets out the painful words: “I was hoping we’d find them alive.”

The Gaza City resident in her thirties wipes away tears as she stands before a psychologist from a local organisation.

Ola is one of many Gazans who lost family members during 11 days of Israeli bombardment last month when the local health ministry says 66 Palestinian children and teenagers were killed.

From May 10 to May 21, the Israeli army pummelled the Gaza Strip in response to rocket fire by militants of the Islamist movement Hamas which rules the coastal enclave that is home to two million people.

One of the strikes devastated the Al-Rimal district of Gaza City and demolished the building where Abeer, Ola’s sister, lived with her family.

Ten hours after the raid, rescue teams miraculously pulled Abeer’s husband, Riad, and their eight-year-old daughter, Suzy, from the rubble.

But Abeer and the couple’s four other kids did not survive.

“I can’t stop thinking about my sister and her children, who might have been alive for hours under the ruins,” said Ola Ashkantana, who turned down the offer of anti-anxiety medication.

“I’m in shock. Now I’m afraid of losing my own children.”

In the next room, Riad holds Suzy on his knees, as Hassan al-Khawaja, a Gazan doctor specialising in mental health, encourages him to try psychotherapy.

“I’m suffocating. I’ve even thought of going to live alongside them in the cemetery,” said Riad, whose family says has hardly spoken since the war tore his loved ones away.

“I’m traumatised. How will my feelings and thoughts ever change? I will never again be who I was before.”

Ola and Riad are not alone. The latest Gaza war, the fourth since 2008 in the Israeli-besieged territory, saw some 1,000 apartments, offices and businesses destroyed.

But the few psychiatrists and psychologists in the enclave know that rebuilding will have to go far beyond physical reconstruction.

“It’s not the first time that we have a war in Gaza,” said Khawaja, who says much of the population suffers from post-traumatic stress disorder. “We have to work on multiple traumas.”

“I expect a PTSD crisis in the coming months,” he said, explaining that with each new trauma and war, many Gazans faces relapses and acute stress disorder, with symptoms including shock and denial.

If such stress is not addressed quickly, it can progress into PTSD — meaning the work of mental health care teams is vital in coming months to prevent an explosion of cases.

At Al-Awda hospital in Jabalia camp, northern Gaza, Bilal Daya has a broken arm, a hole in his calf and his left leg in a splint.

But it’s not the 24-year-old’s physical injuries that concern doctors the most.

Bilal was drinking tea outside his home in eastern Gaza when an Israeli strike injured a neighbour.

“He was screaming for help,” Bilal said. “I tried to carry him, but another missile hit. There was an enormous buzz in my ears, human body parts around me, smoke. I couldn’t stand because I was hit by shrapnel.”

Bilal, who says he is not a fighter, had to crawl to safety. Seven other people in his neighbourhood died.

He looked haggard and distracted in his hospital bed, a far cry from the young, full-of-life man in the photo his father had brought.

Awad hopes to prevent trauma from settling in and ravaging the young man’s psyche.

“We are trying to get him to talk. It’s the most significant trauma of his life and we want to avoid its escalation into PTSD,” Awad said.

“Right now he’s suffering from shock and denial; he tends to generalise everything… without talking much about himself.”

The 2021 war was shorter than the previous Gaza-Israel conflict in 2014, causing fewer deaths and displacements.

“How can you comfort your child when a bombing is happening and it does not stop for 20-30 minutes?” he asked.

“It is impossible. We always say to people you need a safe place, to feel secure, but here, for 11 days, there was no secure place.”

Israeli strikes killed 260 Palestinians including some fighters, the Gaza authorities said. In Israel, 13 people were killed, including a soldier, by rockets fired from Gaza, the police and army said.

No university in the Gaza Strip offers a speciality in psychiatry, and the available mental health services can’t keep up with demand.

Some specialists even question the whole concept of PTSD in Gaza, where, as psychiatrist Samir Zaqout put it: there is no “post-trauma — because it is ongoing trauma”.

“To be cured of trauma means that you can live in a safe place,” Zaqout said.

“But in Gaza — and particularly during this war — there is no safe place. So you can speak about coping, you can talk about resilience.”

“But you cannot really cure.”