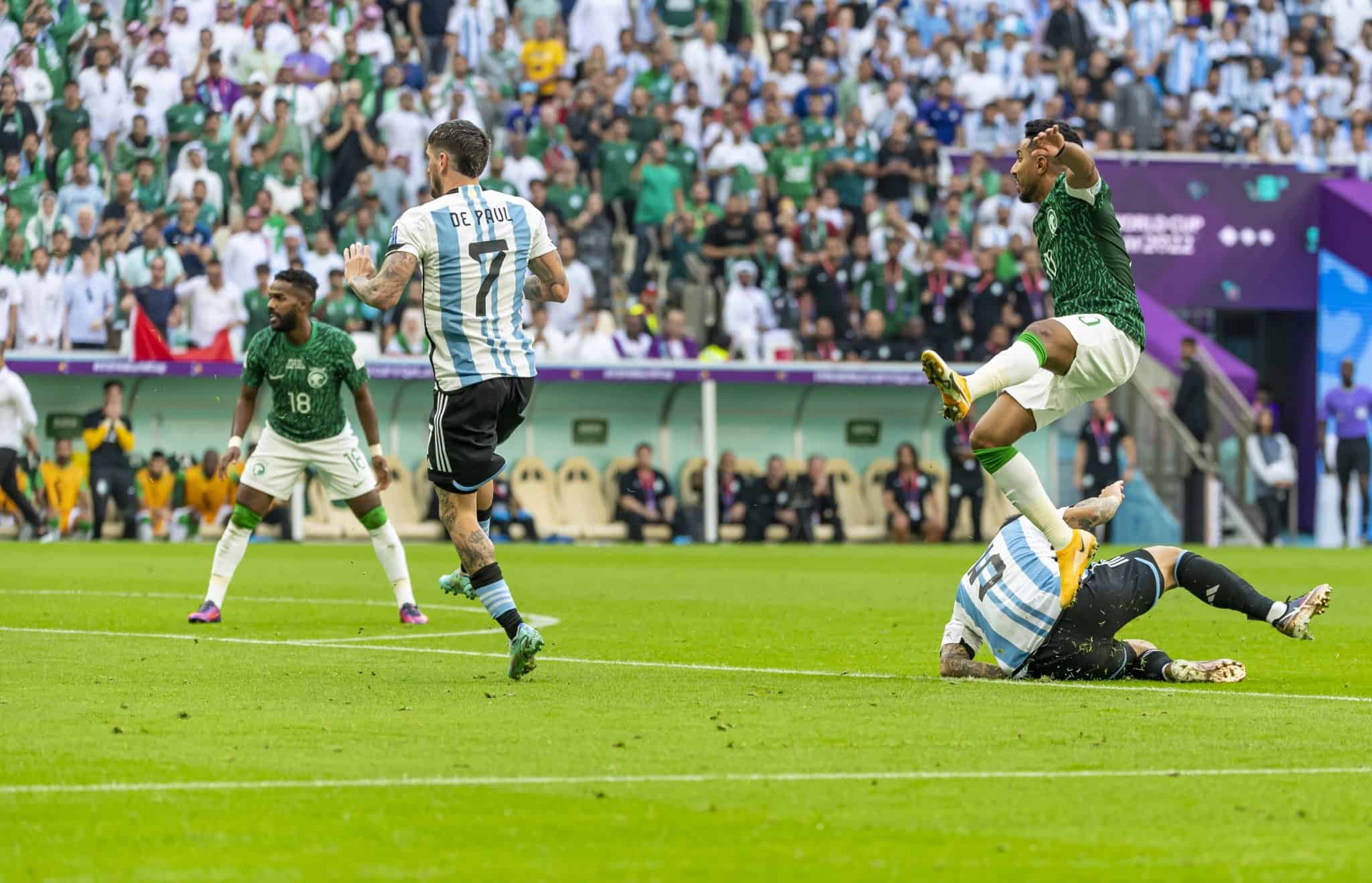 Defeat is a bitter blow for Argentina, who were one game away from equalling Italy's all-time record of 37 matches unbeaten. (SPA)

Doha, Qatar—Saudi Arabia pulled off one of the greatest upsets in World Cup history on Tuesday, roaring back to beat Lionel Messi’s Argentina 2-1 and set the tournament in Qatar alight.

Copa America champions Argentina came into the match on a 36-match unbeaten streak and appeared to be on their way to a straightforward victory after Messi stroked home an early penalty.

Lionel Scaloni’s team could have put the game beyond Saudi Arabia’s reach in the first half but had three goals chalked off for offside.

Saudi Arabia, ranked a lowly 51st in the world, equalised early in the second half through Saleh Al-Shehri, silencing the hordes of Argentina fans.

But just minutes later the Green Falcons were in front when Salem Al-Dawsari rifled an unstoppable shot into the top corner after a delightful piece of trickery.

Argentina laid siege to the Saudi goal as the minutes ticked away but Saudi goalkeeper Mohammed Al-Owais proved unbeatable and the final whistle sparked scenes of jubilation.

“We made history for football,” he added. “It will stay forever, this is most important. But we also have to think about looking forward. We still have two difficult games before us.”

Defeat is a bitter blow for Argentina, who were one game away from equalling Italy’s all-time record of 37 matches unbeaten.

Forward Lautaro Martinez said the loss — in what is likely to be the final World Cup of Messi’s glittering career — hurt badly.

“It’s clear we lost the game because of our own mistakes, above all in the second half,” he said.

“In the first half, we should have scored more than a goal. But that’s the World Cup. Now we have to rest and think about what’s ahead. those are two finals now.”

The other match in Group C pits Robert Lewandowski’s Poland against Mexico, with the Barcelona forward still seeking his first World Cup goal.

The prolific Lewandowski is yet to open his account at the finals after failing to score on his one previous appearance, in 2018.

Goalkeeper Wojciech Szczesny believes his teammate will break his duck in Qatar as Poland aim to reach the knockout phase for the first time since 1986.

“I think it’s definitely important for him (to score),” Szczesny said. “He’s very motivated before the World Cup. No one doubts that Robert is one of the best players in the world right now.”

Mbappe the difference
Messi’s PSG teammate, Kylian Mbappe, is already a world champion at the age of 23.

The forward will be licking his lips ahead of France’s Group D match against an Australia side desperately lacking star power.

France coach Didier Deschamps is without first-choice midfielders Paul Pogba and N’Golo Kante for the whole tournament while Ballon d’Or winner Karim Benzema has also been ruled out.

Deschamps said Benzema’s absence would put Mbappe under even more pressure to deliver.

“He has always had the ability to make the difference and we will need that,” said Deschamps, who led the team to glory in 2018 in Russia.

“He has the ability to be decisive at any moment, unlike many other players.”

Mbappe will lead a French attack in which veteran Olivier Giroud is expected to feature.

Denmark take on Tunisia in the other match in the group, with talisman Christian Eriksen set to complete a remarkable comeback after suffering a cardiac arrest during the European Championship last year.

World Cup organisers were facing growing questions about whether rainbow-themed hats and t-shirts can be worn in Qatar, where homosexuality is illegal.

The issue arose on Monday when former Wales captain Laura McAllister was confronted by security at her country’s match against the USA and ordered to remove a rainbow-coloured bucket hat.