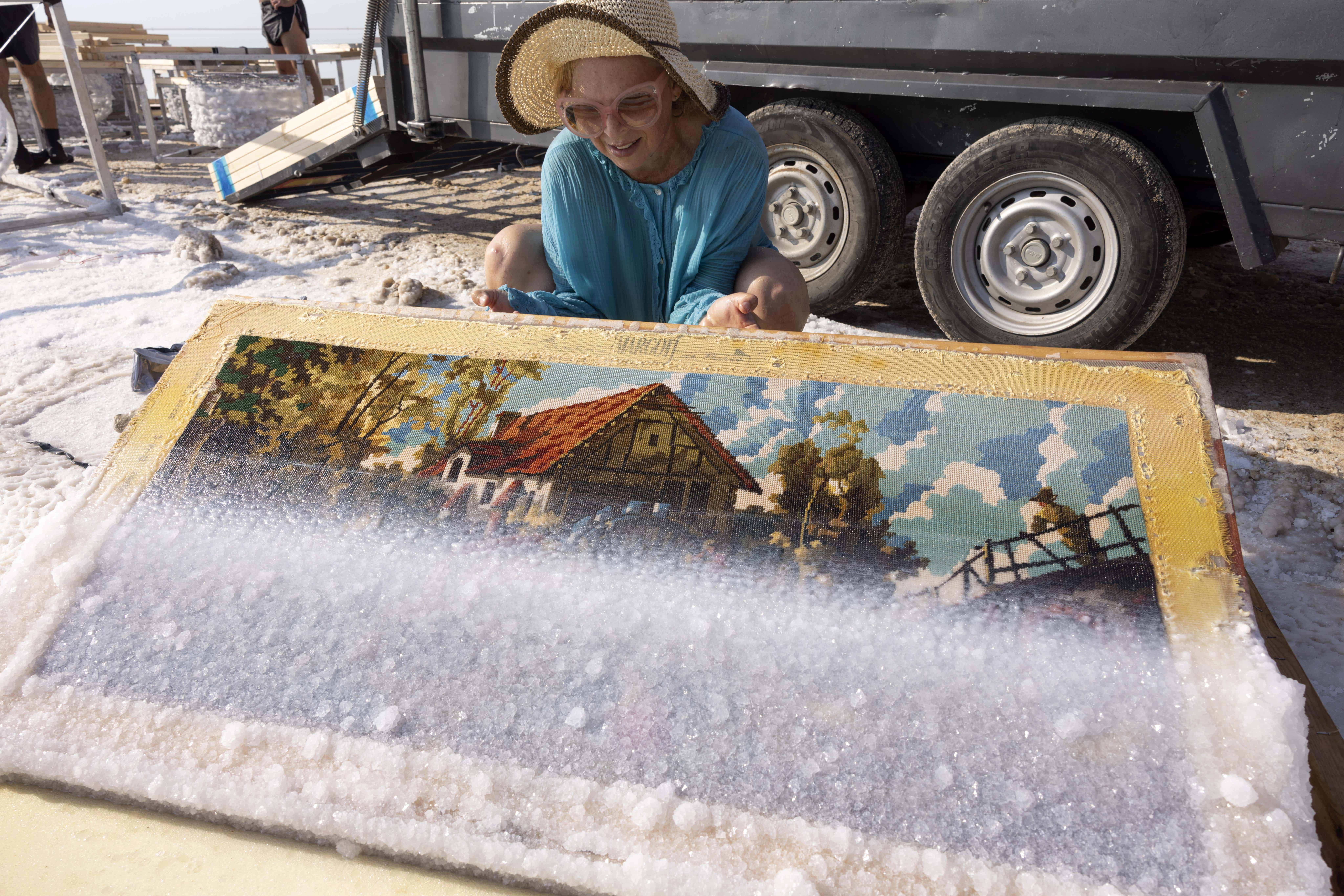 Multidisciplinary Israeli artist Sigalit Landau inspects one of her artworks, after being submerged in the salty Dead Sea water. (AFP)

By TRENDS Desk AFP
August 11, 2022 12:30 pm
Share
Israeli artist Sigalit Landau wades into the warm, briny waters of the Dead Sea to inspect her latest creations everyday objects coated in salt crystals that glisten in the bright morning sun.
The lowest point on Earth is also Landau’s studio where she submerges objects from a ballet dress to a lampshade’s wire frame for weeks until they are magically transformed by ice-like layers of salt.

“These waters are like a laboratory,” said Landau, looking at a salt-encrusted coil of barbed wire, its sharp points now caked and rounded thanks to the mineral-rich water heated by the scorching desert sun.

“What you’re looking at,” she said with wonder, “are the barbs, which are very threatening and sharp and how they’ve actually become quite coated and kind of sealed off, snowy, flaky-looking.”

The Dead Sea, a popular tourist site flanked by dramatic mountain cliffs, constantly offers surprises in how it changes objects, Landau said: “You become very humble. What the sea wants, that’s what I’ll get.”

Landau works by suspending the objects in the salt lake from frames. Later, she carefully liberates the brittle artefacts with the help of several assistants.

Some objects are so heavy with the salt attached to them they need to be carried by four people.

Landau, whose Dead Sea fascination began with video art decades ago, said she has witnessed the “man-made disaster” now threatening the lake, which is bordered by Israel and the occupied West Bank on one side, and Jordan on the other.

The water level has dropped about a meter (three feet) per year in recent decades, and the Dead Sea has lost a third of its surface area since 1960.

Landau worries it will vanish unless government policies change. “It’s disappearing and it shouldn’t,” she said. “It’s important enough and beautiful and a wonder.”

Dozens of Landau’s Dead Sea sculptures, as well as old and new video art installations, will be on display at the Israel Museum in October.