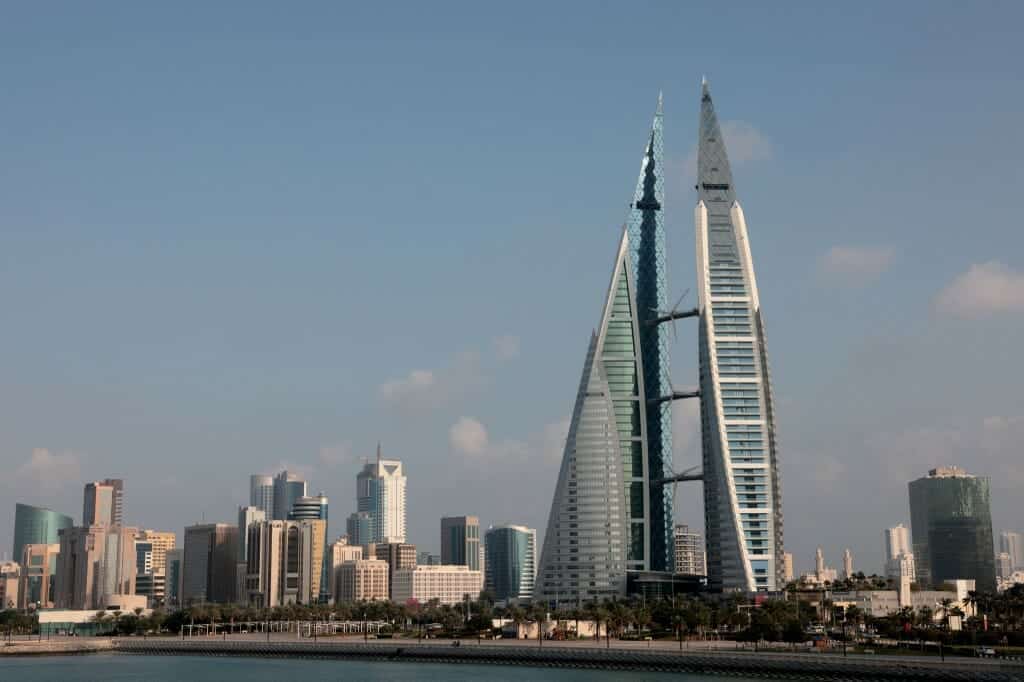 The world trade center in Manama. Bahrain plans to double its VAT rate to 10 percent, which could drive its citizens to shop in the UAE. (AFP)

Bahrain, the smallest Gulf country, is planning a 100 percent increase in the value-added tax or VAT rate, effective from January 2022.

In the GCC, Saudi Arabia and the UAE were the first to introduce a VAT system in January 2018. Bahrain followed a year later, and Oman brought in the tax in April 2021. Qatar and Kuwait have yet to introduce it.

The initial rate of VAT in the four countries was 5 percent. However, Saudi Arabia tripled its VAT rate in July 2020 to 15 percent, and it seems Bahrain will now double its rate to 10 percent.

TRENDS spoke to a couple of leading tax consultants to understand its impact on businesses and consumers in Bahrain and other Gulf countries.

They all agreed that any such tax would result in negative business sentiment. Moreover, they added, VAT as a consumption-based tax would also affect consumer behavior in the short to medium term.

The key finding, however, was that this step could boost retailers’ sales in the UAE as price is always an important factor during shopping, especially for big-ticket luxury products.

Retail sales in the UAE are expected to rebound and grow by 13 percent to reach $58 billion by the end of 2021, according to the Dubai Chamber of Commerce and Industry.

Visitors from Bahrain may prefer shopping in the UAE to pay less VAT and save money for more purchases.

On the other hand, Bahrain retailers have three months to launch promotional campaigns to get more sales before the new VAT rate comes into force.

Nimish Goel, partner at WTS Dhruva Consultants, explained, “Consumers are likely to advance their purchases before the implementation of the new rate. Therefore, businesses should strategize marketing and promotions of their Bahrain establishments.”

Goel said the broader impacts of the VAT rate hike in Bahrain could include the imposition of a corresponding increased cost of doing business for entities precluded from recovering the input VAT on their expenses incurred, specifically in the financial and real-estate sector.

On the other hand, businesses in the UAE that have operations in Bahrain may want to evaluate current policies and pricing strategies to pass on the increased VAT cost, he added.

Anurag Chaturvedi, CEO of Chartered House Tax Consultancy, said the increase in VAT would hike inflation considerably, which might lead to weaker local demand during the transition period.

“The UAE’s export to Bahrain amounted to $3.54 billion last year, and an increase in taxes will boost export from the UAE, as local products will be than those imported from the neighboring countries,” he explained.

“In addition to trade, the UAE will emerge as favorable destination for investors and startups, given that its tax rates are the lowest in the region and internationally.”

Another Dubai-based tax expert said there would be no impact on UAE businesses unless they had subsidiaries in Bahrain. “Those subsidiaries will need to charge 10 percent VAT on supplies they make in Bahrain, unless the supply is zero-rated or exempt,” said Thomas Vanhee, partner at Aurifer.

It is expected that businesses such as education, healthcare, basic foods, domestic and international transportation, and a few sectors of construction would not suffer, as they can collect additional tax on behalf of tax authorities.

However, certain industries such as automobiles and jewelry could experience adverse effects because of economic forces that result from inflation and diminished spending power.

In Bahrain, the economy is bouncing back as the island country overcomes some of the fallout from the Covid-19 pandemic. Its real GDP growth reached 5.7 percent year-on-year in the second quarter, while real non-oil growth touched 7.8 percent during the same period.

In July, the IMF urged Bahrain to do more to get its finances in shape. Once it recovers from the economic downturn triggered by the pandemic, the country will likely need “an urgent fiscal adjustment,” according to Ali Al-Eyd, the IMF’s Bahrain mission chief.

“Aside from adding up to another 1.8 percent of GDP to government revenue, the implementation would mark a renewal of the fiscal reform momentum, which we see as the prerequisite to the augmentation of the GCC financial support package that is about to run out in early 2023,” said Alex Perjessy, VP and Senior Analyst at Moody’s.

It may be noted that the tripling of the VAT rate in Saudi Arabia from to 15 percent in July last year has already shown successful outcomes.

These include additional revenues of around 37 percent in the fourth quarter of 2020, and extra leverage to support healthcare and socio-economic spending.

Talking about the impact of the VAT rate hike on the Gulf’s largest economy over the past year, Goel said it could have resulted in a rise in Saudi residents travelling to the UAE for luxury or retail spending.

“However, due to the restrictions in travel and the pandemic, UAE businesses have not witnessed any significant change. Now, with ease in travel restrictions and a mega-event like Expo 2020, the UAE is likely to see tourists flocking to it, and they may plan their luxury or retail spending there to take advantage of the difference in VAT rate,” he explained.

Vanhee concurred: “There is no competitive advantage to be gained for the UAE due to the lower rate except for travel, retail, and tourism, where the UAE remains more attractive.”

He added: “In a B2B environment, the VAT rate is not inducive of competition between jurisdictions. In a B2C environment, it is, because of price setting. This may mean that a retailer looking to get into a market may prefer one where it expects its margins to be higher — due to a lower VAT rate. However, Saudi Arabia is a very large economy, and so may still remain attractive.”

Chaturvedi stated that the impact of Saudi Arabia increasing VAT had been favorable to the UAE in the form of a sharp rise in the market share of ecommerce players operating from the UAE in Saudi Arabia.

The UAE’s ecommerce market has recorded a 53 percent year-over-year increase, driven by the Covid-19-led digital shift and the neighboring country’s tax hike.