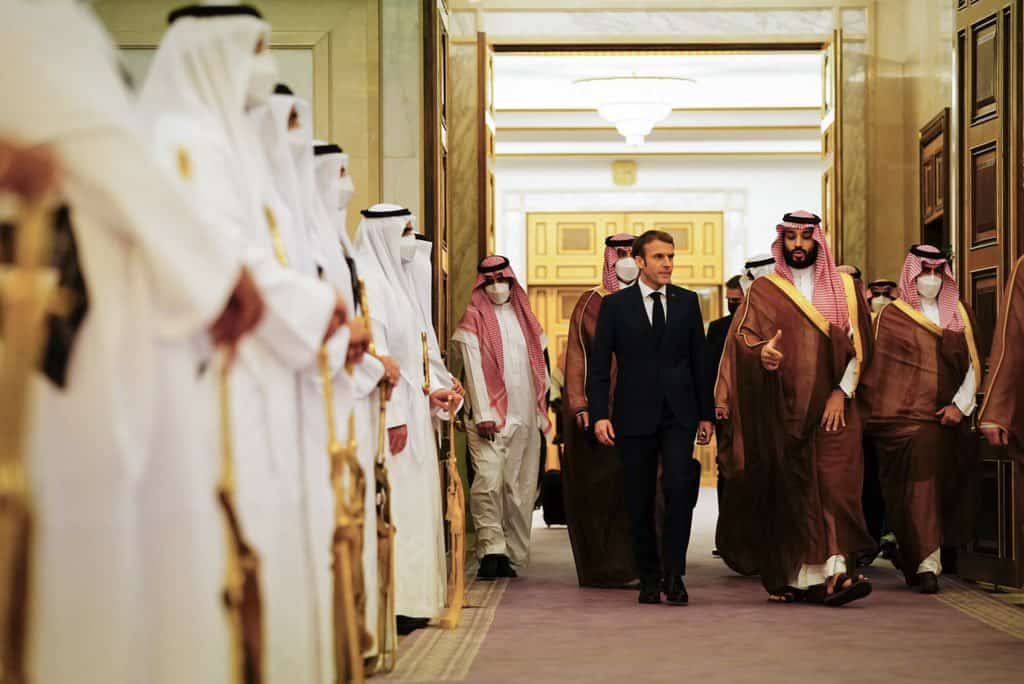 Saudi Arabian companies and their French counterparts have signed a number of deals across different verticals, even as the two countries agreed to step up cooperation in fields like tourism.

The moves seemed aligned with Saudi Vision 2030, which was unveiled in 2015 and aimed to diversify the country’s economy and reduce its dependency on oil.

In a joint statement released after the meeting on Saturday, the two sides said Prince Mohammed’s visit to France in 2018 had “contributed to expanding the scope of cooperation between the two countries in various fields.”

The Saudi Arabian side said it welcomed the increased cooperation of French companies in sectors within Vision 2030, including in energy, water, and waste management, sustainable cities, transportation, civil aviation, mobility solutions, digital economy, and health.

They also agreed to enhance cooperation in the production of nuclear energy, the management of radioactive waste, nuclear applications, nuclear control, and the development of human capabilities within the framework of the government agreement signed in 2011.

On the climate change, the two sides stressed the importance of adhering to the principles of the Framework Convention on Climate Change and the Paris Agreement, as well as the need for climate agreements with a focus on a circular carbon economy approach.

On the regional and international issues, the two sides emphasized strengthening and consolidating joint cooperation to achieve peace and security across the world in general and the Middle East in particular.

As Macron and Prince Mohammed met, Saudi Arabian Airlines Corporation announced that it had ordered CFM International LEAP-1A engines to power its new fleet of 35 Airbus A321neo and 30 A320neo aircraft.

This agreement is also said to include a Rate-Per-Flight-Hour (RPFH) services contract to cover engines from this new order as well as an additional 20 leased A320neo aircraft.

This comprehensive agreement is valued at approximately $8.5 billion at list price.

Under the terms of the agreement, CFM is also expected to assist the Saudia Group subsidiary Saudia Aerospace Engineering Industries in developing its own engine overhaul services, including disassembly, inspection, assembly, testing, and qualification/certification for the LEAP-1A engines.

Meanwhile, the Saudi Arabian Oil Company, or Saudi Aramco, announced the signing of five agreements with leading French companies, including an agreement to explore a hydrogen-powered vehicle business with Gaussin.

The agreement between Aramco and Gaussin reportedly aims to establish a modern manufacturing facility for on-road and off-road hydrogen powered vehicles in Saudi Arabia.

As a first step, Gaussin and Aramco will study the feasibility of a manufacturing facility and a hydrogen distribution business to serve the Middle East region.

Other agreements seek to further Aramco’s research and development in the areas of carbon-capture technology, artificial intelligence, and local manufacturing.

The agreement comes within the framework of supporting and strengthening the strategic partnership between the two sides in an effective way, said official sources.

On the occasion of Macron’s visit to Saudi Arabia, France also signed an MoU with the country to increase cultural collaboration.

The MoU is also expected to help the two countries explore cultural regulations and policies.

It will also reportedly result in opportunities to increase the participation of Saudi and French artists in residency exchange programs.

France and Saudi Arabia also signed an agreement to enhance tourism cooperation on the sidelines of Macron’s visit.

Both France and the Kingdom are seeking to enhance their tourism activity during the period of recovery from the pandemic and beyond, through a memorandum of understanding.

Joint initiatives are expected to be launched between them to develop the tourism market and enhance coordination between the citizens of the two countries.