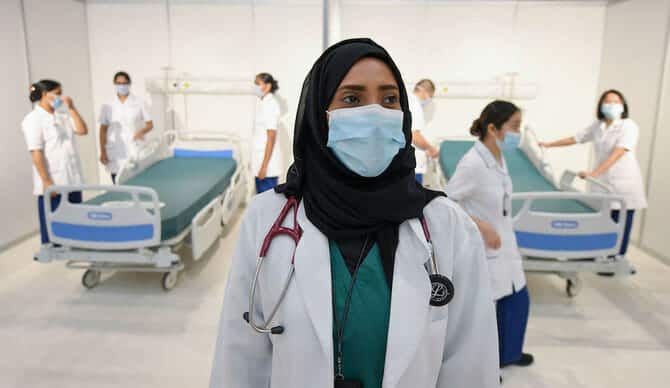 The COVID-19 pandemic as well as falling oil prices in 2020 have impacted all sectors including healthcare insurance in the GCC region: AFP

Despite the economic turbulence hitting the member states of the Gulf Cooperation Council below the belt in the last few years, spending on healthcare has continued to grow. To meet the growing demand, the governments have considered the private sector as a key partner in the long-term development of the healthcare industry, particularly in terms of the quality of care in medical services.

In its latest report entitled “UAE Healthcare Perspectives: Who cares,” global accounting and consulting firm KPMG said that healthcare-related expenditure in the GCC states grew from US$60bn in 2013 to US$76bn in 2019 and is expected to grow to a further US$89bn by 2022, an overall increase of nearly 50 percent from 2013 to 2022.

From 2018 to 2022, the private-sector healthcare spending is forecast to increase at a cumulative annual growth rate (CAGR) of 9.5 percent, compared to a government contribution growth rate of 4.4 percent, the report said.

The KPMG report further said that the growth of private investment, as although the UAE government funded approximately 69 percent of the country’s US$16bn healthcare expenditure in 2019, from 2018 to 2022, private-sector healthcare spending is forecast to increase at a cumulative annual growth rate (CAGR) of 9.5 percent, compared to a government contribution growth rate of 4.4 percent.

However, Dubai-based boutique investment banking firm Alpen Capital in its report on GCC Healthcare Industry, said that the healthcare expenditure in the GCC was projected to reach US$104.6bn in 2022 from an estimated US$76.1bn in 2017, implying a CAGR of 6.6 percent

The COVID-19 pandemic as well as falling oil prices in 2020 have impacted  all sectors including healthcare insurance in the GCC region.

With the GCC countries focussing on economic diversification programmes, it was the private sector which joined hands with the regional governments to take care of the health insurance sector.

According to the latest data from the World Health Organization (WHO), total health care per capita spending was highest in the UAE (US$1,817) followed by Qatar (US$1,716) and Saudi Arabia (US$1,485) respectively.

The Qatari government accounted for three-quarters of all spending with the remainder composed of voluntary health insurance (15 percent) and out-of-pocket spending (10 percent), the WHO said.

Likewise, Bahrain has introduced the National Social Health Insurance Program that mandates health insurance coverage for every resident, visitor and citizen in the country in 2019.

As a part of the program, the Bahrain government covers the medical expenses of the citizens and domestic workers, while the employers are expected to cover the insurance of the expatriates. Similarly, Oman and Kuwait have also initiated the process of mandating health insurance in their respective countries.

Takaful premiums/contributions grew at a compound annual rate of 6.8 percent between 2017 and 2020. Insurance penetration (gross written premiums as a percentage of GDP) in the takaful markets remains low, indicating good growth potential, the ratings agency said.

Meanwhile, the introduction of compulsory medical insurance within the past four years in Oman, Qatar, Saudi Arabia and Kuwait, and the implementation of mandatory motor insurance in Saudi Arabia, will help sustain takaful premium growth at or close to current levels.