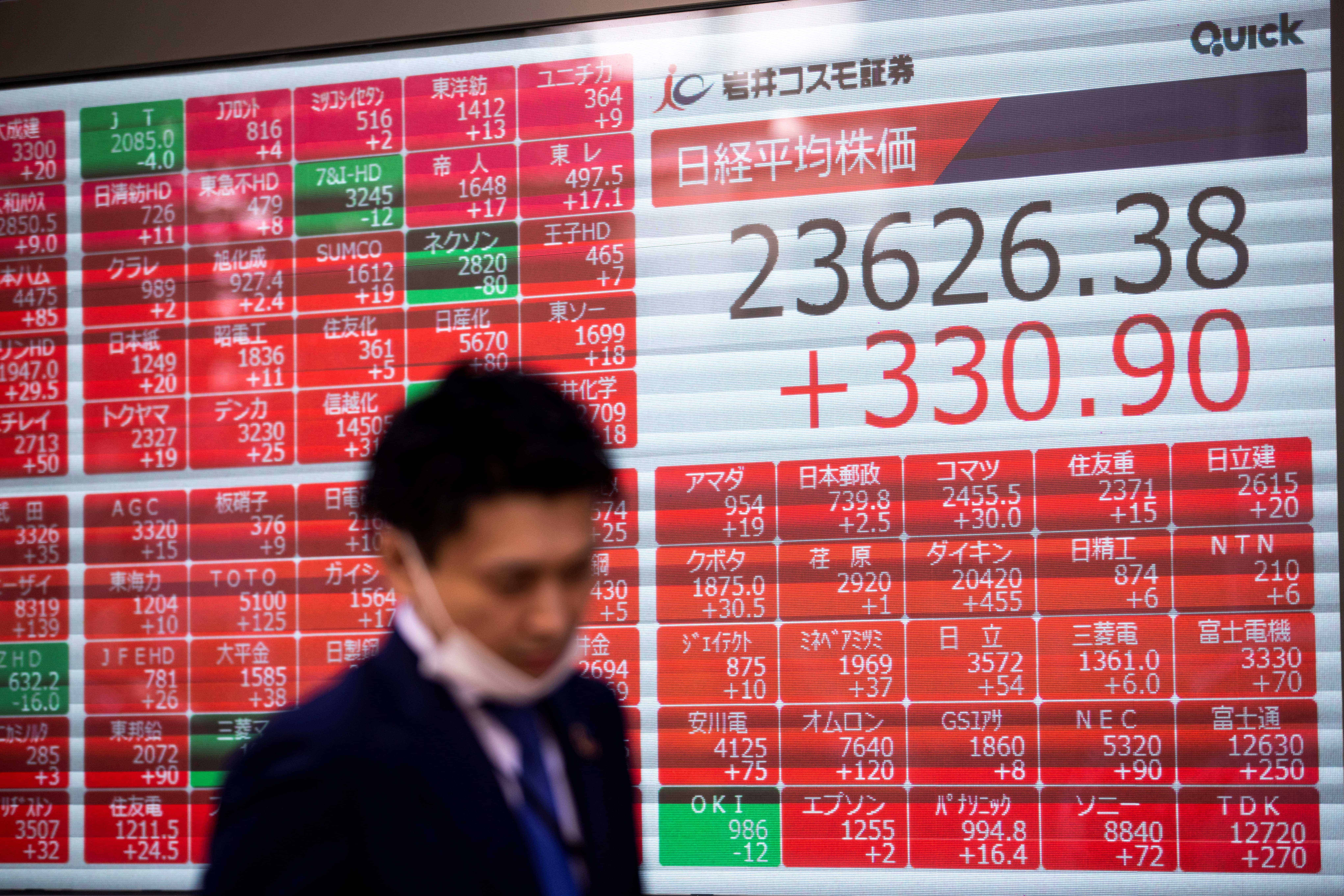 A pedestrian walks past an electronic board displaying the Nikkei 225 index and share prices on the Tokyo Stock Exchange in Tokyo on November 4, 2020. (AFP File Photo)

Bourses in Paris, Frankfurt, Tokyo, and Hong Kong all lost around one percent or more, taking their cues from Tuesday’s rout on Wall Street following a gloomy US consumer confidence report.

US stocks stabilized on Wednesday, with the Dow adding 0.3 percent while the S&P 500 and the tech-heavy Nasdaq dipped slightly.

European sentiment also was rocked by data showing Spanish inflation rocketed to a 37-year peak of 10.2 percent in June on rising energy and food prices.

“So much for the big stock market comeback. Another day, another sea of red on the market,” said AJ Bell investment director Russ Mould.

The selloff followed more than a week of global gains caused by hopes that any signs of contraction could give central banks room to ease up on the aggressive pace of monetary tightening.

“It does look like we are still in the first phase of this bear market, where indices are prepared to drop on the slightest bit of bad news, and any rally is short-lived,” said Chris Beauchamp at online trading platform IG.

New York stocks tanked Tuesday on data showing confidence among US consumers a key driver of the world’s top economy had fallen to its lowest level in more than a year, re-igniting worries over the strength of the world economy.

The data eclipsed news of a surprise move by China to slash the quarantine period for incoming travelers that had raised hopes for further relaxations that can allow the giant economy to recover more quickly.

Updated first quarter US GDP data released Wednesday chopped the personal consumption growth figure to 1.8 percent, from 3.1 percent, an indication that even at the beginning of the year consumers were feeling crimped by rising prices.

“With signs that consumer confidence is seeping away, worries that global growth will go down the drain have returned to rattle financial markets,” said Susannah Streeter, senior investment and markets analyst at Hargreaves Lansdown.

“Covid restrictions may have eased for international travelers to China as infections rates slow, but one global problem is being replaced by another fear that recessions are looming around the world.”

City Index analyst Fawad Razaqzada said there is a threat of high inflation and recession, a phenomenon economists call stagflation.

“That is where the global economy is headed, and central banks won’t be able to do much about it,” he said in a note to clients.

Key figures at around 2020 GMT