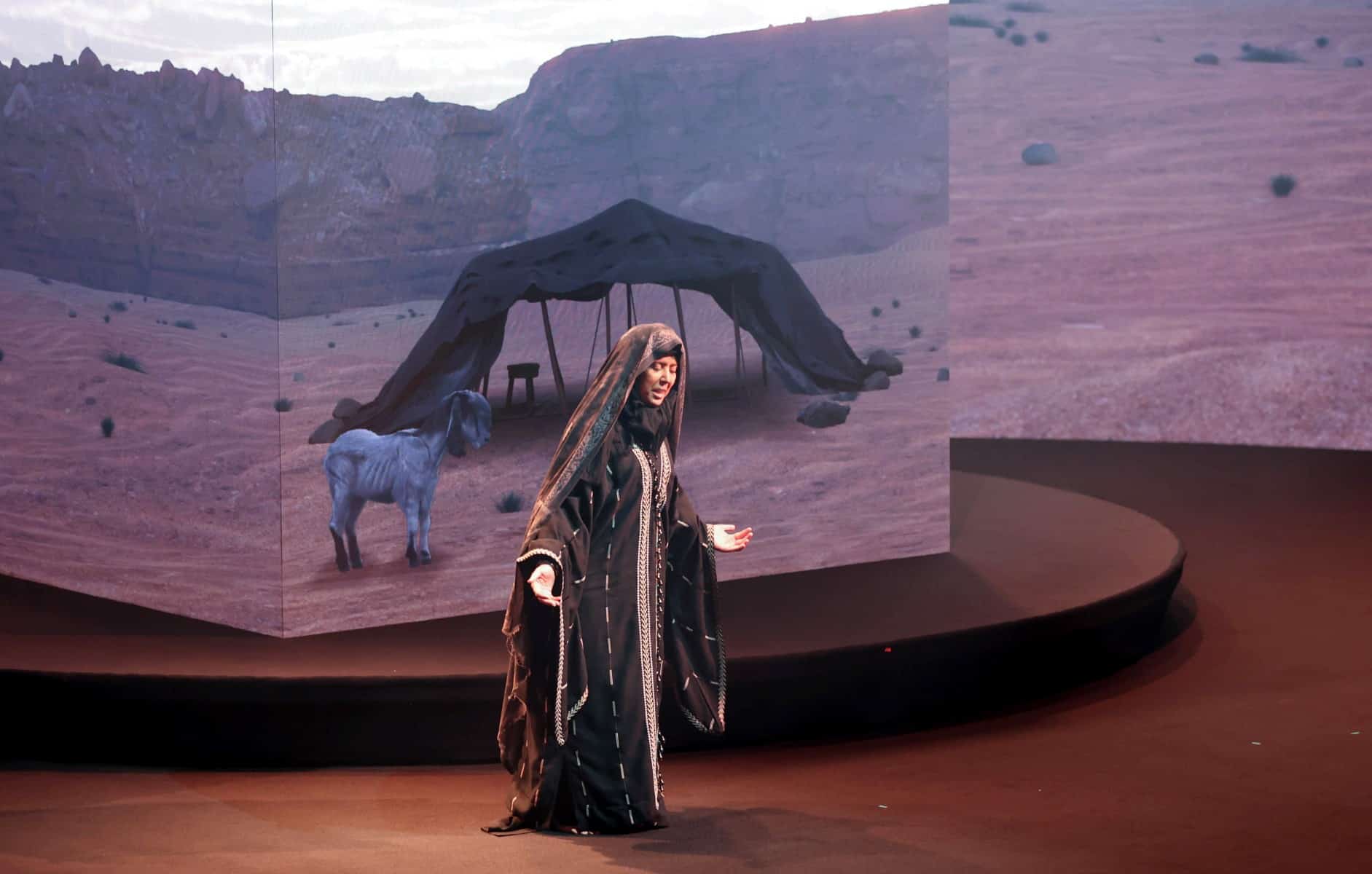 An artist performs a scene about the Hijrah at the Ithra Museum in the city of Dhahran. (AFP)

A Saudi museum is using filmed re-enactments and contemporary artwork to depict a key episode from Prophet Mohammed’s life that led to the establishment of the Muslim community.

The exhibition seeks to illustrate –- and enliven –- the 1,400-year-old story of the Hijrah, when Prophet Mohammed, threatened with assassination, undertook an eight-day, 400-kilometre (250-mile) migration from Mecca to Medina.

Opened to the public this week, it will be housed for nine months at the Ithra Museum in the eastern city of Dhahran before touring domestically and then abroad.

Most Muslims know the Hijrah story in broad strokes, though never has it been presented in such an immersive way, according to Saudi scholar Abdullah Hussein Alkadi.

It incorporates everything from centuries-old artefacts to modern-day drone footage, said Alkadi, who has spent decades studying the Hijrah and whose research formed the foundation of the exhibition.

Ordinary Saudis “know that the Prophet migrated from Makkah to Madinah –- that’s it,” Alkadi said, lamenting that the material was not thoroughly covered in schools.

It should be equally eye-opening for non-Muslims who might not know the story at all, conveying messages — like the need for tolerance towards migrants — that are relatable for everyone, Alkadi said.

Three years in the making, the exhibition features work by academics and artists from 20 countries.

Short films by American director Ovidio Salazar depict how elders from the Quraysh tribe plotted to kill the Prophet Mohammed, prompting him to flee, and an encounter with the bounty hunter Suraqah, who was offered 100 camels to return the Prophet dead or alive.

Museum-goers will also see a life-size replica of the Prophet’s cherished camel Qaswa, contemporary photographs from the Hijrah route and textiles from the Prophet’s Mosque in Medina.

Other elements are more interpretive, notably a piece by Saudi artist Zahra Al Ghamdi, whose works have previously shown at the Venice Biennale and the British Museum.

For the Hijrah exhibition, Al Ghamdi spent five months dipping pieces of fabric in mud and clay and knotting them together.

The knots, displayed against a white backdrop, are meant to signify the bonds between the residents of Medina and Prophet Mohammed and his followers.

“Through this work, I am making an appeal to revive and bring to life this concept of brotherhood, which gives meaning to life,” she said.