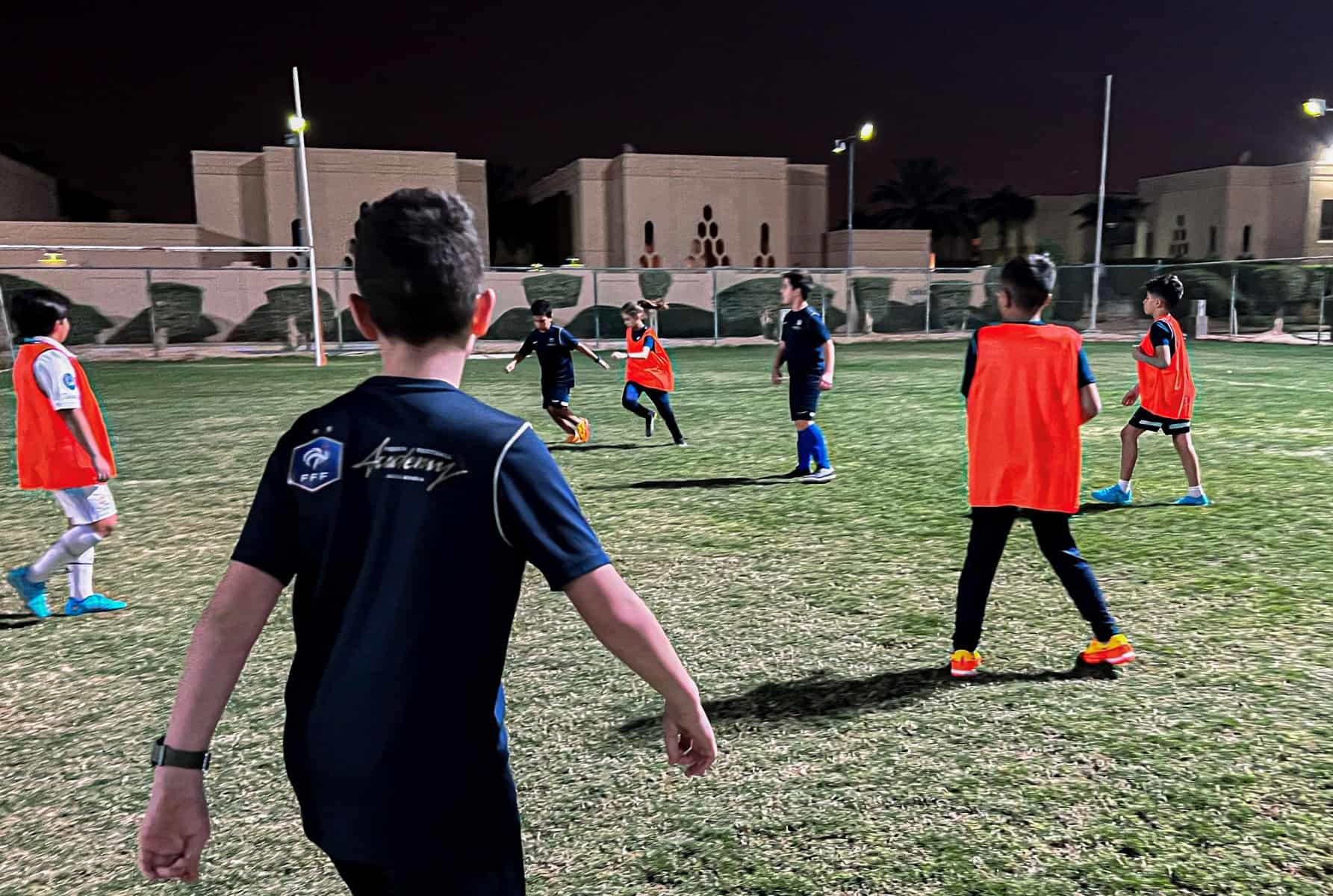 During a recent evening training session in Riyadh, more than 20 teenagers ran passing drills and took shots on mini-goals. (AFP)

Riyadh, Saudi Arabia — As the World Cup brings some of the best-known names in sports to Qatar, youth football academies in neighboring Saudi Arabia expect a spike in registrations but urge more investment.

The Gulf kingdom has long been obsessed with football, but interest in playing — not just watching — has surged in recent years amid a government push to promote physical activity under Crown Prince Mohammed bin Salman’s Vision 2030 reform agenda.

Among the wannabe Messis and Neymars is 11-year-old Abdulrahman al-Ghamdi, who first put on cleats two years ago, encouraged by an uncle who once played for the prestigious local club Al Nassr.

“One day I stepped on the pitch and I started loving it,” Ghamdi told AFP during a recent practice.

But Ghamdi fears he has already fallen behind peers in other countries with more advanced training pipelines.

“I don’t really think I’m going to be a high-level football player because in England they have better advantages… and professional people” as coaches, he said.

“There are young kids that are way better than me.”

Even before World Cup fever descended on the region with its first edition in the Arab world, local academies were struggling to accommodate the needs of youngsters taking to the pitch.

Saudi Arabia is “definitely” a country of football, he told AFP.

“They love to play, they love to watch, they love to cheer and support. This passion is no different than any other place,” Ziane said. “The only difference is whether they have access to it or not.”

The French academy opened its first facility in the capital Riyadh in January and has since added five more including in Jeddah and Dammam, training 500 young players in total.

During a recent evening training session in Riyadh, more than 20 teenagers ran passing drills and took shots on mini-goals before a short scrimmage, their parents cheering them on from the sidelines.

The field, on a residential compound, is something of a rarity in the Saudi capital: made of natural grass and large enough for an 11-a-side match, as opposed to smaller fields of artificial turf.

“You have to take into consideration that it’s definitely not going to be the same as in Europe or in France, for example, so you have to forget about what you know and adapt to what’s in front of you,” Ziane said.

Wilfried Louisy-Daniel, a former professional player in France now coaching in Saudi Arabia, said he has been impressed by the level of enthusiasm for the sport but that “some things need to be developed.”

Specifically, more youth teams are required so players can compete closer to home instead of having to travel hundreds of kilometers (miles) for a game, he said.

Demand is only going to increase during and after the World Cup, he assessed, especially if the Saudi team makes a deep run.

The Green Falcons have qualified for six World Cups but advanced to the knockout stage just once, during their 1994 debut.

“If we have a good campaign, on top of the fact that it’s the first World Cup in the Middle East, surely that will bring a lot of fervor,” Louisy-Daniel said.

Challenges aside, several Saudi players told AFP they were determined to attain football stardom, recognizing that other players have come from much poorer backgrounds to reach the elite stages.

“I really want to train more so I can be like them.”

If all goes well, Jaser could one day get the chance to play in a World Cup match before a home crowd.

An Egyptian official said in September that Egypt, Greece and Saudi Arabia were in talks on a joint proposal to host the tournament in 2030.

But even if that doesn’t happen, Jaser is eager to put Saudi football on the map.

“In most of the really good teams in Europe, there’s not many Saudi players, and I hope I can change that” and “change the football world”, he said.