The union is advantageous: Sheikh Zayed 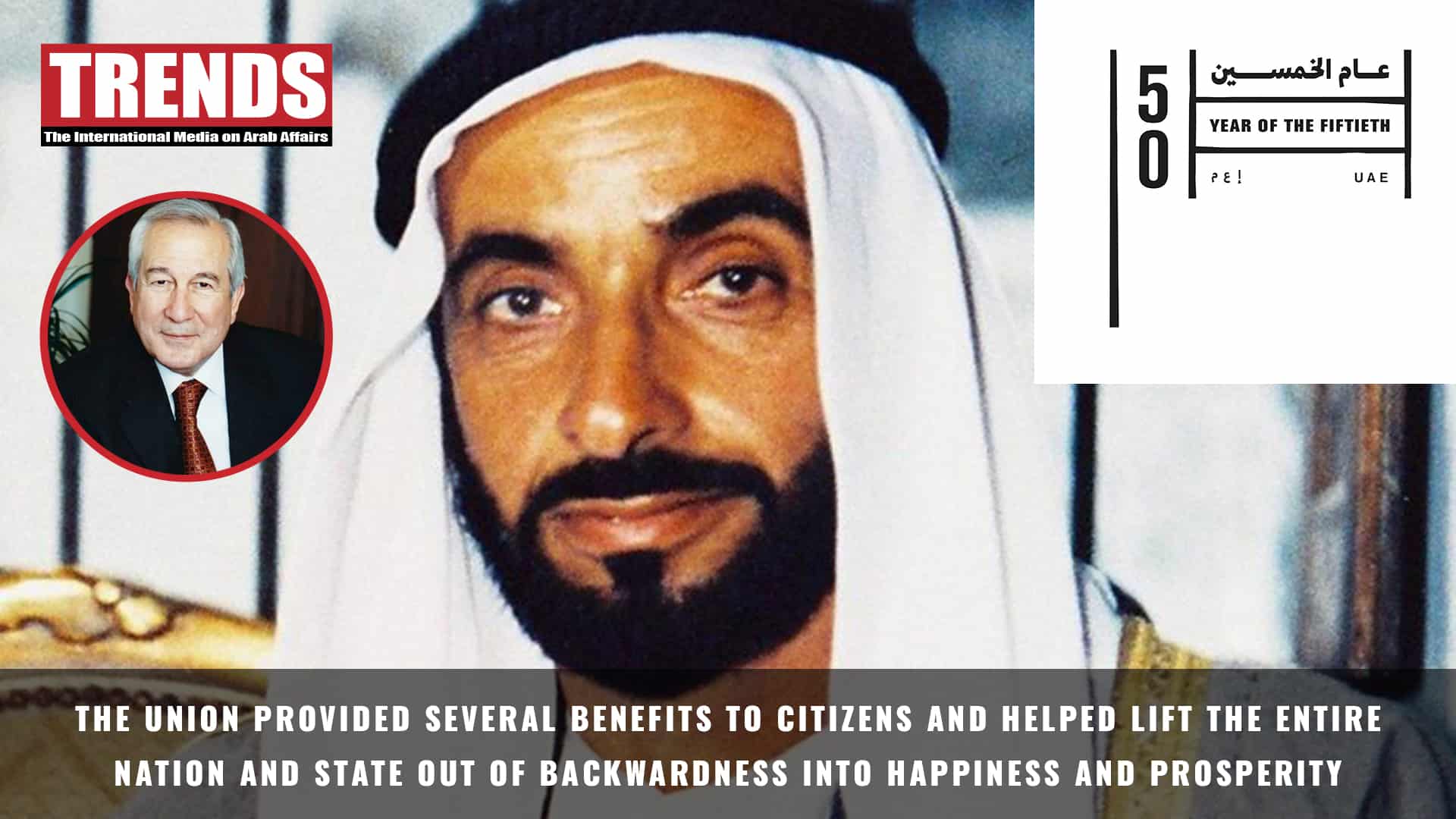 A rare and exclusive interview of Late HH Sheikh Zayed bin Sultan Al Nahyan, founder and first president of the UAE, with Yasser Hawari  in 1975, four years after the formation of the Federation.

Excerpts from the interview

Your Highness, how do you assess the experience of unity in the UAE and is it sustainable?

The union amongst Emirates is just fine despite being a new experience for us. We did not adopt our neighbors’ experiences in the union. We rather counted on our faith in our brethren rulers of the Emirates and in the importance of the union as a cordial solution to the problems of disintegration.

Although a lot of citizens were not fully aware of the union and its benefits, we are, by the grace of the Lord, on the right path. We hope for more development in the future. 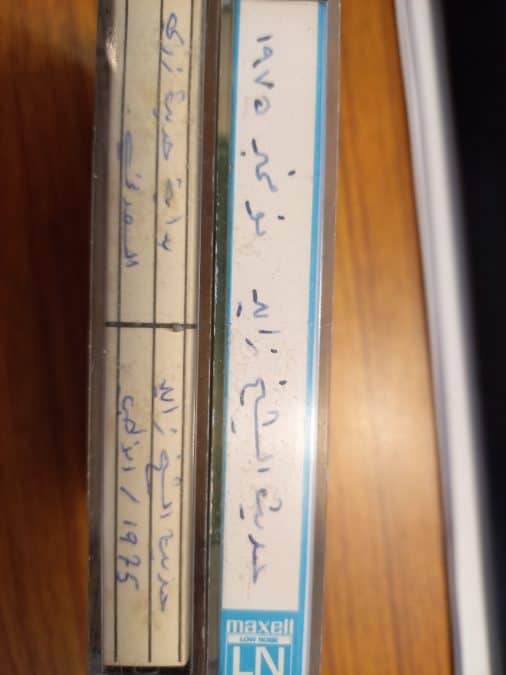 I can give you an example about the advantages of union. The Council of Development is in-charge of the projects’ expenditure. It had a modest budget. This budget has doubled with the union. All the money is ultimately for the benefit of our nation and its residents.

I have gained with my brothers — the rulers of UAE — lots of expertise through our journey from division into unity and from underdevelopment to an era of education, prosperity and progress in a matter of time nobody could’ve imagined.

And whoever witnesses these prominent shifts can never give up the idea of the union. The union has produced welfare that no soul can ever deny.

We must work hard to upgrade our achievements, fill gaps, complete deficiencies to overcome errors and achieve a stronger union, which is obvious through our achievements year by year.

Has the union come through mistakes and how did you overcome them?

Of course, our union faced mistakes, which makes sense as the country entered a new unfamiliar phase. We learned a lot from those mistakes during constructing the country and identifying the duties of authorities. We’ve become aware of our vulnerabilities and we overcame them. Thanks to God, we are working constantly to improve our expertise to build our country considering the mistakes and pitfalls that we overcame.

Will the union continue in case an Emirate decides to leave?

I rule out such a thing. Those who think of leaving the union are rare and the overwhelming majority realizes the importance and benefits of unity among Emirates. Personally, I believe strength lies in solidarity even with modest potentials, let alone a country full of resources like the UAE. Leaving the union will make any Emirate vulnerable to greed. It is our duty to maintain affiliation with our brothers and convince them of the importance of the union.

Does the union use power to enforce outlaws?

I don’t believe in using power, although there must be a deterrent if someone breaks the law. A government is like a father who disciplines his children if they commit mistakes.

Is there a possibility of a new Emirate, such as Qatar or Bahrain, joining the union?

The door is open for Qatar and Bahrain. Even if we are not united, we share the same fate. What harms them hurts us and vice versa. Similarly, happiness will elude Bahrain and Qatar until we are happy, as we are all on the same boat.

There are calls for a Gulf Conference including Iran, Iraq and Saudi to coordinate to face challenges of the future. How do you see such efforts?

I have always called for a Gulf Conference as we share certain characters, which are not shared with other friendly countries, with our agreement to the importance of upholding Arabism. There must be a special conference of the Gulf countries that is held from time to time to coordinate and discuss issues related to their resources and economies to achieve prosperity for their people. I see the importance of such conferences in identifying the priorities of the Arab Nation and our duties towards our Arab brothers. No matter how far from each other we live, we are still brothers who share the same honor and pride.

Such conferences will play a key role in resolving conflicts and troubles between Iraq and Iran or amongst Arab countries. As we are brothers, problems might occur. These problems must be solvable because of the fact that they emanate from the same Arab house.

We don’t deny we are taking the first steps in that direction. But it is important that we go through all the phases and evaluate each and benefit from our neighbors’ successes and apply those successes if they fit our reality. If they don’t fit, we can abandon them and search for alternatives.

Some people claim that your focus on external matters has negatively impacted the efforts to support the union from the inside. In case such engagements persist, can you consider having someone else at the top of the union’s pyramid?

Getting involved in the issues of our Arab brothers ultimately favors the union because the people of the UAE believe in Arabism. My efforts are focused on achieving Arab interests, which is in the best interests of UAE’s empowerment also. Our country is worthless without the honor and strength of Arabs, as we are but a branch of the Arab world.

Who benefits from the dismantling of the UAE?

The biggest loser would be the Arab world. Anybody desiring the destruction of the UAE is desiring to weaken the Arab world, such as Israel. But countries with wise leadership would never like to see the disintegration of the union because the union is a source of strength for the entire world.

Europe — especially France, Britain and Germany — appears to be warming up to the Arab world. How do you see ties between Europe and the Gulf in particular?

As Arabs, we welcome all countries that seek friendship and peace. These values are the reason behind the happiness of countries. Wealth and resources are useless in times of conflict and instability. The Arab Nation believes in peace and reaches out to everyone who seeks it.

The union has accomplished a lot over the years. It is still trying to achieve more, but rejects some of the ideas such as the unification of defense, security and immigration. Are there different perspectives among different Emirates? And where does the UAE stand on such issues?

There are no disputes and all issues in the UAE are sorted out through consultation. Dialogue is the solution to various issues in the new union, which united all the Emirates. We hope to transmit this experience to the next generation.

There has been criticism of the Executive Board of the UAE that its ministers don’t take full responsibility for it. Is there a tendency to reconsider the structure of this entity such as choosing a Prime Minister who determines the responsibilities of different specialized agencies?

Is there a possibility of an agency related to the presidency that monitors the performance of the government indirectly?

Watch this space, TRENDS is converting the full-length audio interview (more than 60 minutes) of Late UAE President Sheikh Zayed bin Sultan into NFT (non-fungible token) and deploy Blockchain technology to trace the authenticity of this unique piece of the UAE history. This would probably be the first Arab/GCC Archive to be converted into NFT using Blockchain technologies.