As major economies meet, US looks to increase pressure on Russia 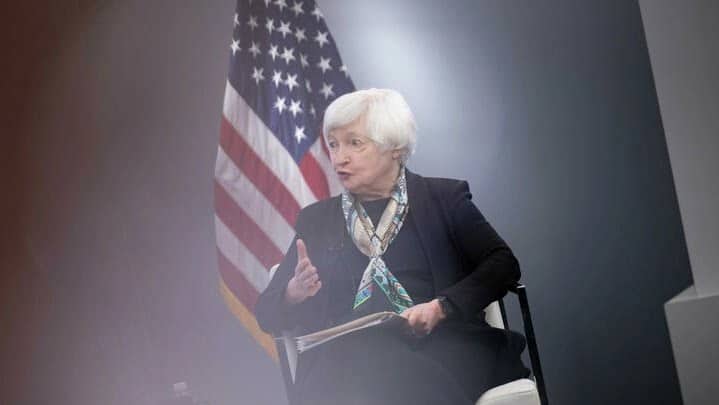 US Treasury Secretary Janet Yellen will make clear to world finance officials that Russia must be held accountable for its invasion of Ukraine. (AFP file Photo)

US Treasury Secretary Janet Yellen this week will call on her counterparts in major economies to ramp up the economic pain on Moscow over its invasion of Ukraine, a senior official said Monday.

The fallout from the war and the impact on the global economy will be key topics of discussion during the spring meetings of the IMF and World Bank, which began Monday.

Finance officials from the G7 and G20 nations also will meet this week.

“The secretary believes the Russian invasion of Ukraine has demonstrated the need for the world’s largest economies to stand together to defend international order and protect peace and prosperity,” the Treasury official told reporters.

“She will use this week’s meetings to work with allies to continue our united efforts to increase economic pressure on Russia while mitigating spillover effects.”

The IMF and World Bank have warned of the devastating costs the war is imposing on the global economy, especially through rising prices for energy and food at a time of high inflation.

Western sanctions on Moscow have contributed to the price pressures, which are hitting the poorest countries the hardest.

While Yellen is “deeply concerned” about the impacts, “We are firm in our resolve to hold Russia and its leadership accountable, and have imposed crippling sanctions,” the official said.

Washington also will continue to work to penalize countries that try to evade the sanctions, and restrict Russian leader Vladimir Putin’s ability to project power.

The official did not provide any specifics on the type of sanctions or the targets being considered.

While Yellen will participate in key meetings this week, especially the opening session of the G20 focused on the fallout from the Russian invasion, she will not attend other sessions if officials from Moscow are included, the Treasury official said.

She will make it clear that “the benefits and privileges of the leading economic institutions of the world which we helped create after (World War II) are reserved for countries that demonstrate respect for the core principles that underpin peace and security across the world,” the Treasury official said.

Russian finance officials are expected to participate remotely in the G20 meeting on Wednesday, which is led by Indonesia this year.

Other officials from the world’s leading economies may boycott the sessions as well, a French source told AFP last week.

US President Joe Biden has proposed ejecting Russia from the G20.

Yellen will meet with Ukraine’s Prime Minister Denys Shmyhal and “will reiterate the Bidena administration’s firm support for the people of Ukraine as they defend their lives and their country,” according to Treasury.

Yellen will call for a coordinated multilateral effort to support Ukraine’s short-term funding needs for humanitarian relief and rebuilding.