Climate crisis is the next great threat facing Iraq 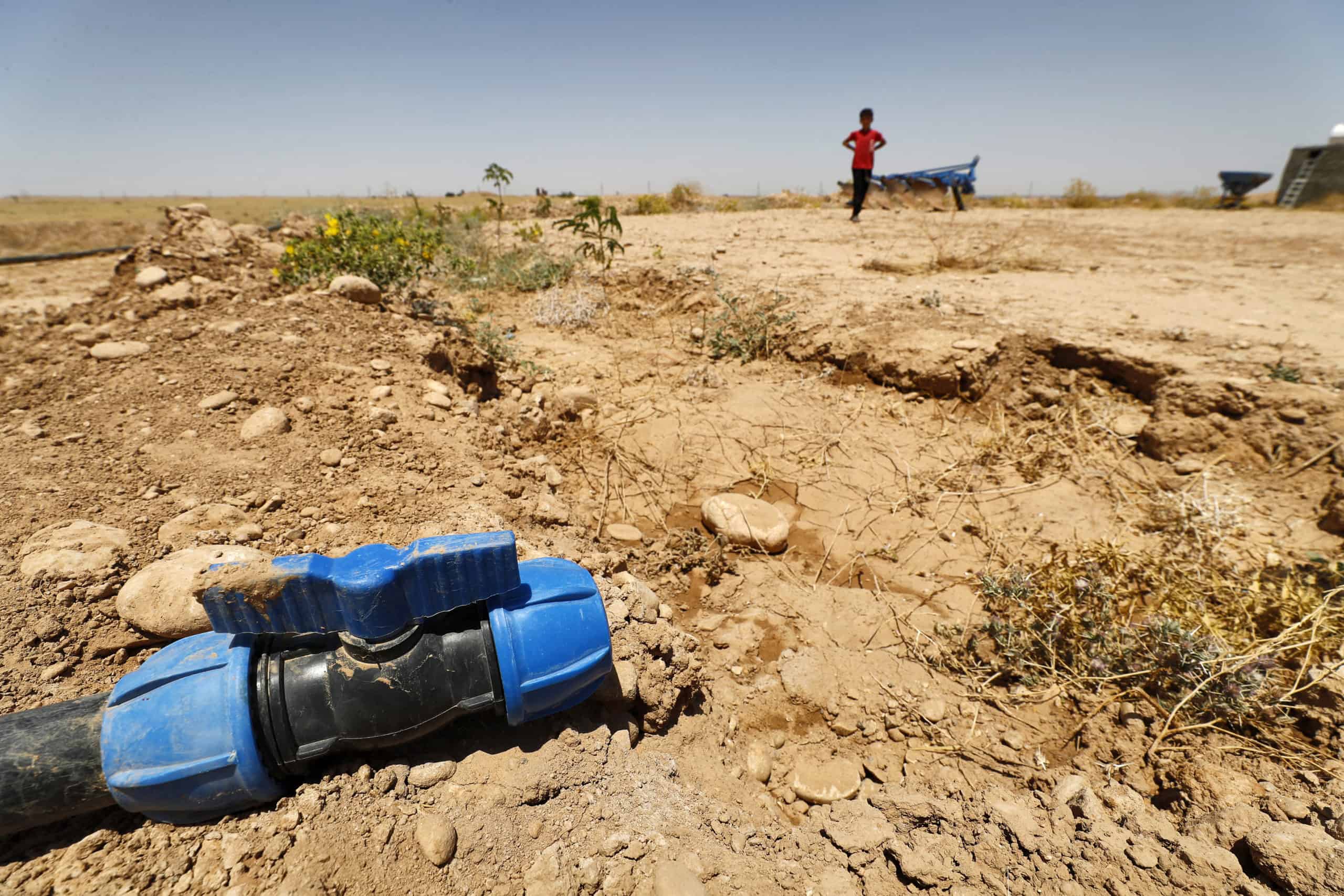 A boy walks through a dried up agricultural field near a dry water hose in the Saadiya area, north of Diyala in eastern Iraq on June 24, 2021. - As Iraq bakes under a blistering summer heat wave, its hard-scrabble farmers and herders are battling severe water shortages that are killing their animals, fields and way of life. The oil-rich country, scarred by four decades of war, is also one of the world's most vulnerable to the climate crisis and struggles with a host of other environmental challenges. (Photo by AHMAD AL-RUBAYE / AFP)

As Iraq bakes in the blistering summer heat, its hardscrabble farmers and livestock herders are battling severe water shortages that are killing their animals, fields and way of life.

The oil-rich country, scarred by wars and insurgencies over the past four decades, is also one of the world’s most vulnerable to climate change and struggles with a host of other environmental challenges.

Upstream dams in Turkey and Iran have diminished the Tigris and Euphrates rivers, which are also heavily polluted with sewage, waste and agricultural runoff as they flow southeast through Iraq.

Drought has hit the Mesopotamian marshes, said to be the site of the biblical Garden of Eden, where water buffalos and their owners once found respite from summer heat above 50 degrees Celsius (122 degrees Fahrenheit).

In southern Iraq, where the two big streams merge into the Shatt al-Arab, the reduced flow has caused saltwater intrusion from the Gulf, degrading the waterway that is shaded by lush palm groves on its banks.

“Everything we plant dies: the palm trees and the alfalfa which normally tolerates salt water,” said Rafiq Taufiq, a farmer in the southern riverside city of Basra.

The saline water encroaching ever further upstream has already destroyed thousands of hectares of farmland.

This year, the trend has worsened again, said Alaa al-Badran, an agricultural engineer in Basra province.

“For the first time the salt entered as early as April, the start of the farming season,” he said.

The problems are exacerbated as decades of military conflict, neglect and corruption have destroyed irrigation systems and water treatment plants.

According to the United Nations, only 3.5 percent of Iraq’s farmlands are watered with irrigation systems.

In Basra, where freshwater canals are clogged with garbage, more than 100,000 people were hospitalised in 2018 after drinking water polluted with sewage and toxic waste.

The heat and the water shortages have been a blow to Iraq’s agricultural sector, which accounts for five percent of the economy and 20 percent of jobs, but provides only half of the food needs of Iraq, which relies heavily on cheap imports.

In a nation of 40 million people, “seven million Iraqis have already been affected by the drought and the risks of displacement that it entails,” President Barham Saleh wrote recently.

In Chibayish, in Iraq’s marshlands, buffalo herder Ali Jasseb said he now has to travel great distances to keep the animals producing milk, his family’s only income.

“Every two or three months, we have to travel to find water,” he told AFP. “Because if the buffaloes drink salty water, they get poisoned, they stop producing milk and sometimes they die.”

Raad Hmeid, another buffalo herder, pointed to the sun-cracked ground below his feet.

“Until 10 days ago this was mud, there was water and even greenery,” he told AFP.

In Iraq’s east, cereal farmer Abderrazzaq Qader, 45, said he had seen no rain “for four years” on his 38 hectare (94 acre) farm in Khanaqin near the Iranian border.

The years of drought, he said, had led many local farmers to abandon the land to take jobs as labourers.

In total, “69 percent of agricultural land is threatened with desertification, meaning it is being rendered unfit for cultivation,” Sarmad Kamel, a state forestry official working on the issue, told AFP.

“On the one hand, there is more and more demand for housing, while on the other hand cultivating land no longer creates sufficient income,” he said.

Rather than continue their back-breaking work for little pay, many farmers near Basra have sold their plots, often for “between 25,000 and 70,000 euros … huge figures for farmers,” he says.

At this rate, “every year, 10 percent of agricultural land disappears to become residential areas”, he added

This accelerates a rural exodus into towns and big cities, piling huge pressure on the economic, social and environmental fabric of life in Iraq.

There is little respite in sight, warned Saleh in a recent statement that said “climate projections for Iraq foresee a rise of about two degrees celsius, and a drop in rainfall of nine percent by 2050”.

Another worrying projection says that, by mid-century, Iraq’s population will have doubled to 80 million.