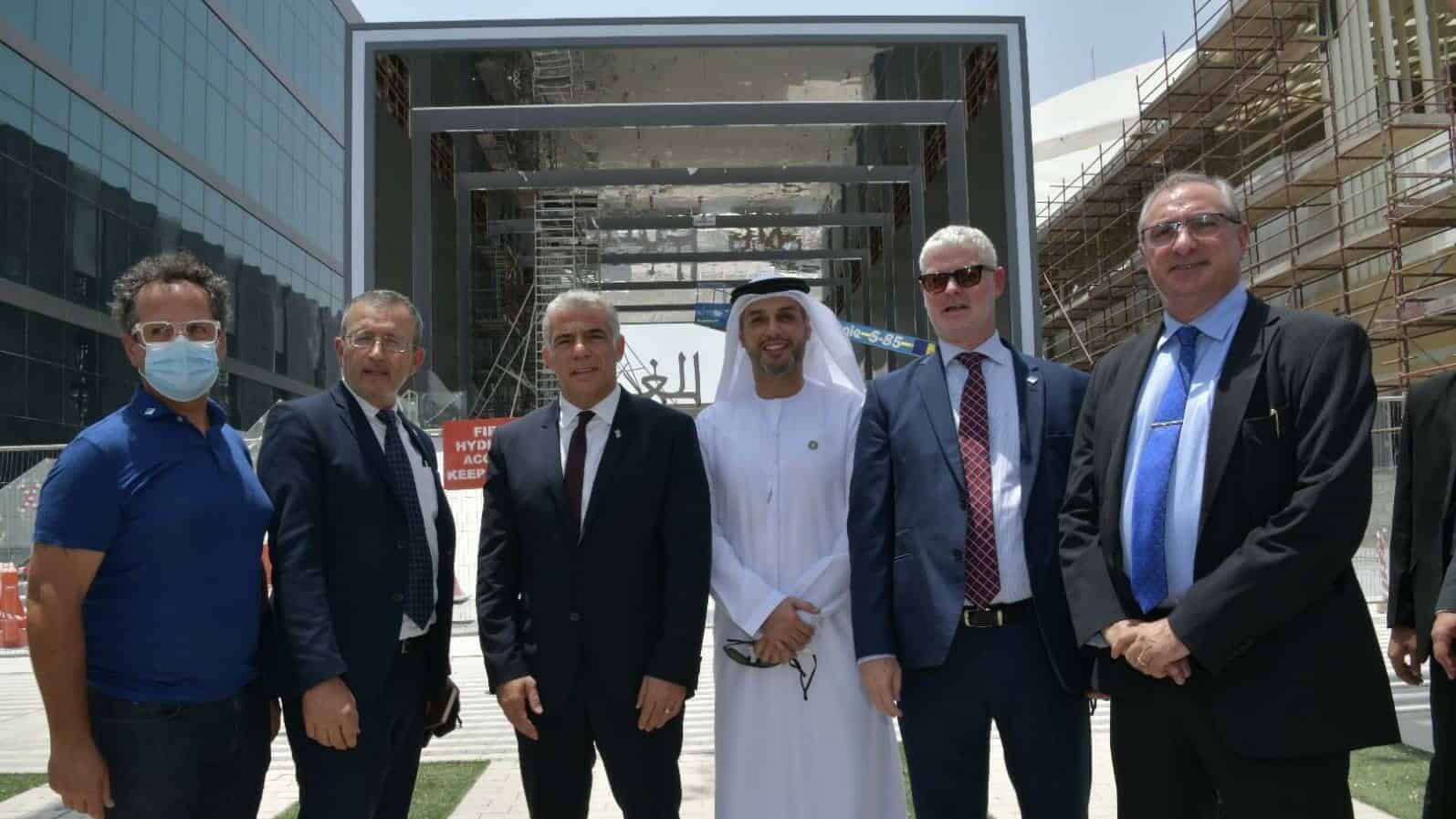 It is not by chance that Israel’s pavilion at Expo 2020 in Dubai prominently features pathways between sand dunes and highlights the desert character of the Jewish state’s diverse topography.
Yes, Israel wants to impress the whole world at the six-month global fair that started October 1. But it especially wants to exhibit its aspirations for ever-growing economic proximity to the host country, the UAE, and to emphasize commonalities with it.
“Expo provides an opportunity to showcase a new relationship with a great deal of potential,” said Brandon Friedman, a research fellow at the Moshe Dayan Center for Middle Eastern and North African Studies at Tel Aviv University.

As an indication of how much importance Israel attributes to Expo, the UAE and the promise of its first-ever warm peace with an Arab country, no less than five cabinet ministers will have visited the pavilion by Monday, if Regional Cooperation Minister Isawi Freij and Religious Services Minister Matan Kahana turn up as scheduled today.
Last week saw visits by Interior Minister Ayelet Shaked, Environmental Protection Minister Tamar Zandberg and Tourism Minister Yoel Razvorov.

One question hanging over the future of Israeli-Emirati ties is the extent to which they could be affected by major flareups over Jerusalem or other aspects of the Israeli-Palestinian conflict.
The current flurry of Israeli ministerial visits to the UAE is part of a trend by the new Israeli cabinet headed by Prime Minister Naftali Bennett, who took office in June, stressing direct ties at the ministerial level, according to Moran Zaga, a specialist on the Gulf at Haifa University and Mitvim-the Israeli Institute for Regional Foreign Policies.
That was lacking during the tenure of Benjamin Netanyahu, the premier who signed the breakthrough Abraham Accords last September establishing diplomatic relations. Although an array of partnerships were forged on Netanyahu’s watch, there were no ministerial visits to the UAE at all, and government to government relations suffered setbacks, noted Zaga.
“But now,” Zaga said, “with every ministerial visit there are more and more opportunities being opened and more bureaucratic barriers being removed.” As an example, she noted that Shaked, the interior minister, during her visit last week announced that as of Oct 10 there would be no visa requirements for Emiratis wishing to visit Israel.
“With the new government a good trend is happening of direct relations between ministers and also working relations and meetings that are highly important to building the relationships,” Zaga added.”This will help develop the economies and widen the types of economic relations.”
“We already see the new government giving a push to things,” she said.

The Minister of Regional Cooperation, Issawi Frej, visits the Israeli Pavilion in the #Expo2020 hear what he has to say!
pic.twitter.com/kWmGGZKPZi

Other actions of the new government that are expected to give a boost to economic ties with the UAE, Zaga said, are moves to pass a state budget after three years of delay due to political stalemate and the appointment in July by new foreign minister Yair Lapid of a full-fledged new ambassador, Amir Hayek, who comes from the economic sector. Hayek is the former head of the Israel Industrialists Association and the Israel Hotel Administration.
The lack of a state budget had thwarted the intentions of the ministries of science, regional cooperation and environment to initiate collaborations with UAE counterparts because they lacked funding allocations, Zaga said.
Overall, the feeling in Israel is that economic ties have generally gone well thus far, with the UAE becoming one of Israel’s top twenty trading partners during the year. Food security, agriculture tech and water management were among the key areas where partnerships were forged.
Trade increased markedly as the newly open relationship gained traction. During 2020 it totaled 94 million dollars, according to the Israel Chamber of Commerce. But then it rose to 270 million dollars during the first half of 2021 alone. Much of the trade was in electronics and communications equipment and the majority of the trade was actually Emirati exports to Israel.
Looking ahead, Friedman thinks that high tech, agriculture, renewable energy and water are among the sectors with the most potential.
“The Emirates has a distinct strategy for the future focused on international trade and business of which high technology is a crucial element. And Israel plays a big role in the high tech economy,” Friedman says.

Within high tech, Friedman believes economic ties will grow in areas such as artificial intelligence, robotics, cloud computing and data analytics.
“The Emiratis want to be a leader in adopting climate-friendly policies,” Friedman said.
“There’s a lot of potential for cooperation with Israel in areas of renewable energy and renewable energy technologies.”
Friedman also thinks there is “great potential” in terms of Emirati investment in Israeli natural gas in the eastern Mediterranean given that the UAE is an important part of the multilateral Eastern Mediterranean Natural Gas Forum.
Israel’s Delek Drilling has already signed a non-binding memorandum of understanding with Mubadala Petroleum for the latter to purchase Delek’s 22 percent non-operated stake in the Tamar offshore gas field.
But Friedman thinks Israel has to be careful in technology dealings.
“Certain agriculture and water technologies have potential to be used in military or missile technologies. We need to be careful we understand the full implications of the dual-use potential so that if our partners in the Emirates are dealing in this technology it doesn’t end up in the hands of our enemies, even just innocently.”
“Unless strict agreements are built into these deals limiting to whom technology transfers are made, businessmen are going to do business wherever they can get a good deal,” he said.
In Friedman’s view, the pace of the growth of economic ties in the short term may be slowed by the ongoing need of each side to learn how to do business with the other.
“These are two very different business cultures and there will be a process of learning that takes time. Everyone needs to find the people they are most comfortable dealing with because personal relationships are important. Even the institutions work differently.”
A bigger obstacle may come in the form of crises in the Israeli-Palestinian arena. Ofir Winter, an analyst specializing in the UAE and other countries normalizing relations with Israel at the Institute for National Security Studies in Tel Aviv, believes Israeli flareups with the Palestinians could have a deleterious effect on Israel-UAE ties. “The Israel-Hamas war in May put the Emirates in an uncomfortable position,” he said.
“An escalation with the Palestinians especially on things concerning Jerusalem or with Islamic aspects to which the public is sensitive, or very tough pictures could embarrass the UAE. It wouldn’t cause the cancellation of the peace treaty but it might lessen the goodwill of the Emiratis to advance the relationship.”