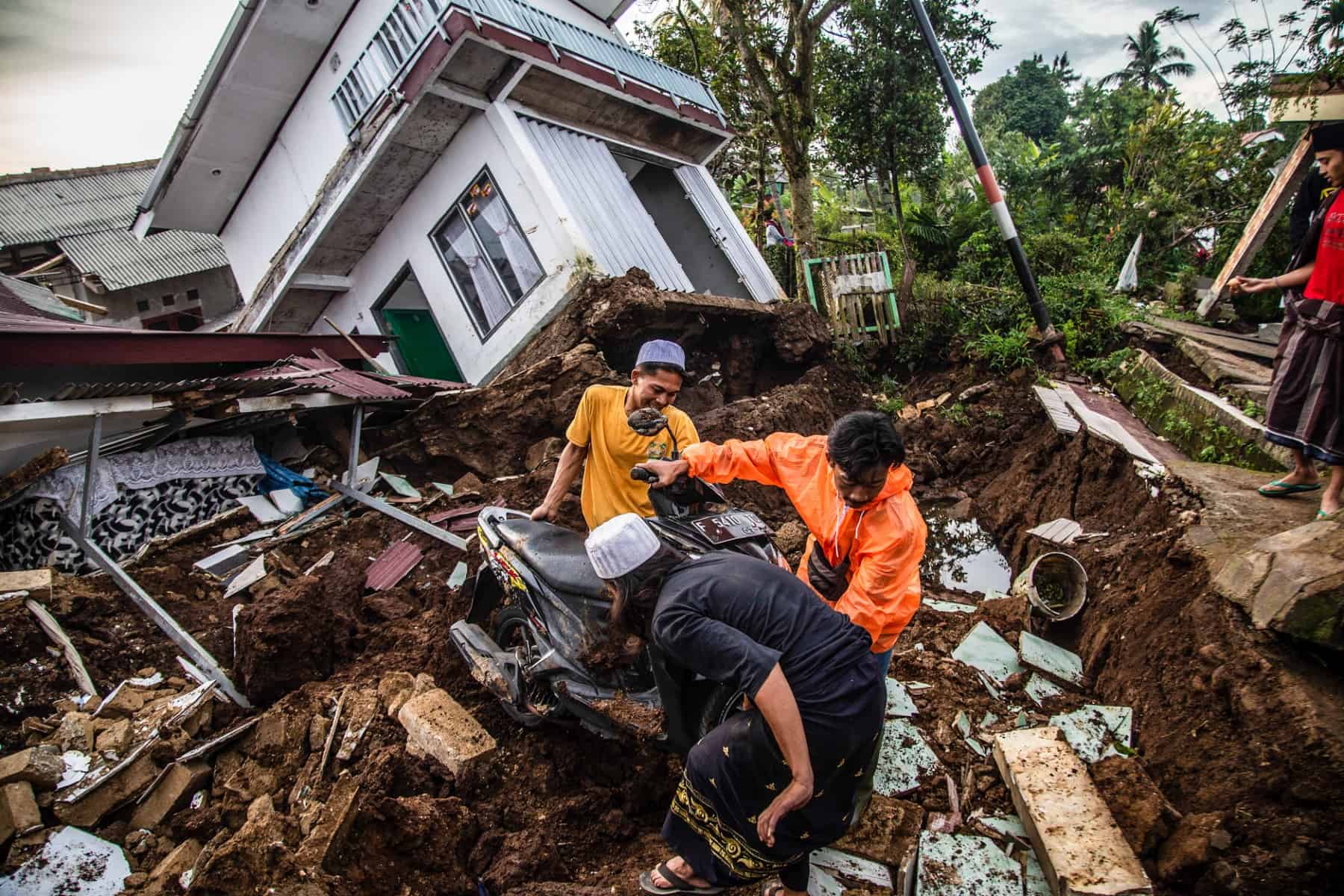 The search operation was made more challenging because of severed road links and power supply in parts of the largely rural, mountainous region. (AFP)

The epicenter of the shallow 5.6-magnitude quake on Monday was near the town of Cianjur in Indonesia’s most populous province West Java, where most of the victims were killed when buildings fell and landslides were triggered.

Some of the dead were students at an Islamic boarding school while others were killed in their own homes when roofs and walls fell in on them.

“The room collapsed and my legs were buried under the rubble. It all happened so fast,” 14-year-old student Aprizal Mulyadi told AFP.

He said was pulled to safety by his friend, Zulfikar, who later died after getting trapped under rubble.

“I was devastated to see him like that, but I could not help him because my legs and back were injured,” he said.

The search operation was made more challenging because of severed road links and power supply in parts of the largely rural, mountainous region.

On Tuesday, dozens of rescuers used heavy machinery in Cugenang village to try and clear the road to Cianjur, which was cut off by a landslide.

As the bodybags emerged from crumpled buildings, the focus turned to the missing and any survivors under the debris.

Indonesia’s national disaster mitigation agency, or BNPB, said at least 25 people were still buried under the rubble in Cianjur as darkness fell on Monday.

Those who survived camped outside in near-total darkness surrounded by fallen debris, shattered glass and big chunks of concrete.

‘Nothing I could save’

Doctors treated patients outdoors at makeshift treatment wards after the quake, which was felt as far away as the capital Jakarta.

Grieving relatives waited for authorities to release bodies from morgues to bury their loved ones in accordance with their Islamic faith while others searched for their missing relatives in the chaos.

At a shelter in Ciherang village near Cianjur, evacuees sat on the cold morning ground on tarpaulins.

Babies and children slept while their exhausted mothers kept watch.

Nunung, a 37-year-old woman who like many Indonesians goes by one name, had pulled herself and her 12-year-old son out of the rubble of their collapsed home.

“I screamed for help for nobody came to help us, I had to free ourselves by digging,” she told AFP from the shelter, her face covered in dry blood.

“Nothing is left, there is nothing I could save but the clothes on our back.”

The devastation caused by the quake was made worse by a wave of 62 smaller aftershocks — with magnitudes ranging from 1.8 to 4 — that kept shaking Cianjur, a town of about 175,000 people.

Leaders from France and Canada offered their condolences on Monday evening but Indonesia President Joko Widodo is yet to respond.

Indonesia experiences frequent seismic and volcanic activity due to its position on the Pacific “Ring of Fire”, where tectonic plates collide.