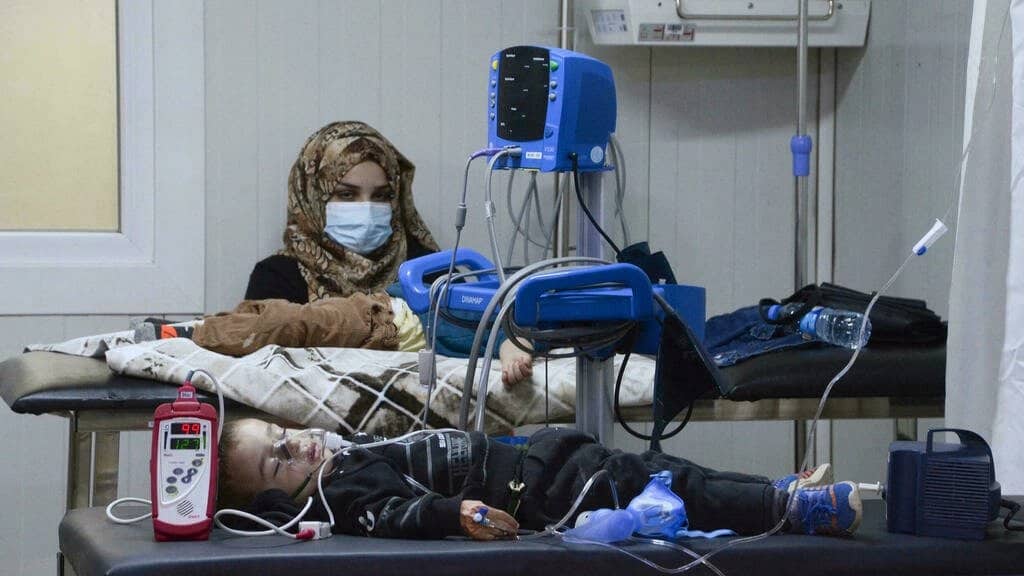 Months after a minor motorbike accident, Amer Shaker is still suffering from poor treatment at a hospital in Iraq’s Mosul, forcing him like many others to seek help elsewhere.

“At public hospitals, we have to pay for everything,” said Shaker. “As soon as we arrived, we paid for the medicine, bandages, the anaesthesia.”

But for the past seven months, he has been treated free of charge at Al-Wahda hospital, opened by Doctors Without Borders (MSF) in Mosul in 2018.

Having spent a small fortune in current Iraqi terms — about $8,000 — on medical care after an initial surgery by a Mosul doctor who failed to heal his leg, which had been fractured in three places, Al-Wahda was a godsend for the construction worker.

“The doctor had inserted a platinum plate, but it was not done right. I tried to find another doctor, but none of them were any good,” said the 21-year-old.

On his left leg, MSF doctors have attached an external fixator, an impressive frame of pins and screws — nearly impossible to find elsewhere in Mosul, he said.

His case is symptomatic of the wider affliction that ails Iraq’s health sector, which like other public services has suffered from dilapidated infrastructure and the effects of successive conflicts.

The former stronghold of the Islamic State group, Mosul was devastated by the battle to oust the jihadists that ended in summer 2017.

More than four years on, the northern metropolis remains a patchwork of gutted concrete carcasses interspersed between buildings under construction.

Five hospitals are being refurbished or reconstructed in the city, according to a public official, and nine health institutions are functioning — leaving a total of 1,800 beds for a population of 1.5 million.

In the coming weeks, Shaker will need to undergo a sixth operation to remove 13 centimetres (about five inches) of dead bone.

Al-Wahda hospital, opened by Doctors Without Borders (MSF) in 2018 in Iraq’s northern city of Mosul, offers treatments rarely available in other facilities in the city

Al-Wahda hospital, opened by Doctors Without Borders (MSF) in 2018 in Iraq’s northern city of Mosul, offers treatments rarely available in other facilities in the city Zaid AL-OBEIDI AFP

At Al-Wahda hospital, patients vary in profile, from Khawla Younes, the 60-year-old housewife who broke her leg in a fall, to Mahmud al-Meemari, undergoing his “16th or 17th surgery” for an injury from a 2017 bomb blast.

Majid Ahmed, an official in the public health authority of Nineveh province — of which Mosul is the capital — acknowledges “a lack of hospital beds and care units”.

The destruction “has affected 70 percent of our health facilities”, he said.

Before the rise of IS in 2014, Nineveh had 3,900 hospital beds, compared to 600 in 2017 after the government wrested back control of Mosul, Ahmed explained.

“The destruction that has struck health institutions in the province requires a significant budget,” Ahmed added.

After the conflict, the medical sector was at ground zero, according to orthopaedic surgeon Hisham Abdel Rahman, who works with MSF alongside his job in the public health sector.

“With time, we see improvement, but it’s very slow,” he said.

At Al-Wahda hospital “we offer services that will not be available in other facilities in Mosul for many years”, he continued.

MSF also runs the Nablus hospital and maternity ward in Mosul, where nearly 900 infants are delivered on average every month.

“This hospital has been filling a gap,” said Kyi Par Soe, MSF’s medical activity manager at the hospital, adding that the two other maternity hospitals in Mosul are “overloaded”.

On a positive note, the public health authority’s Ahmed said the number of Covid-19 cases officially recorded in Mosul was “very low”, with 30 percent of capacity in public hospitals reserved for patients with serious infections.

Apart from the hospitals, the rest of Mosul is also struggling to regain a sense of normalcy.

Residents crowd into cafes and restaurants, many of which have opened under buildings left in a suspended state of construction, their top floors scarred by gaping holes.

Less than 15 percent of residents of eastern Mosul, where fighting for the city ended, have “enough water to meet their daily needs”, according to the International Committee of the Red Cross.

In western Mosul, that figure is 35 percent.

And despite the restoration of certain historic sites, entire swathes of the Old City in central Mosul remain a pile of debris.

Reconstruction efforts have rumbled on at such a slow pace that it is not unusual to uncover bodies under the rubble to this day.

In December, civil defence teams found more than a dozen corpses from the battle for Mosul.