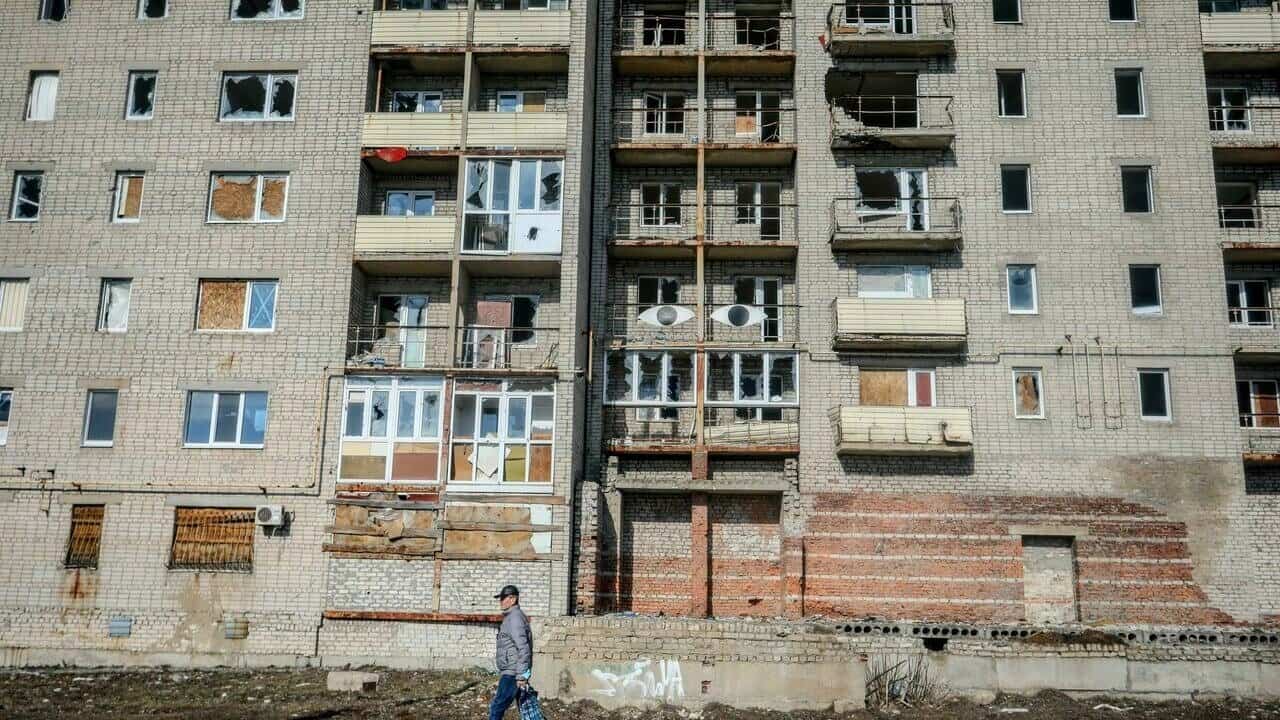 The apartment block overlooking rebel-held territory in eastern Ukraine has been scarred by eight years of war. Image/AFP

Only a fraction of the apartments in Anna Velichko’s shell-scarred high-rise are fit for habitation after years of a war in Ukraine that could yet turn more brutal still should Russia invade.

The 39-year-old lives in one of them up on the ninth floor.

From her rickety perch overlooking the frontline of eastern Europe’s festering conflict, Velichko has a clear view of Donetsk and the Russian-backed rebels who take regular shots at the residents of her town of Avdiivka.

“Right now, they are shooting as hard as they did back in 2015,” Velichko says, referring to the second year of Ukraine’s eastern separatist conflict, when dozens were dying a day.

The official toll now, while disputed, is still small, with one civilian and two Ukrainian soldiers confirmed to have been killed by Kyiv in the past week.

“I want to slap Putin and Zelensky,” she says as fears of an all-out war between Russia and Ukraine rise by the day, if not the hour.

“I want them to finally sit down and agree to end this war,” she says.

The big fear in government-held territory along Ukraine’s front is that it will lead to the arrival of Russian troops, who would be formally asked to protect the pro-Moscow leadership and their territory.

The key unanswered question is whether Putin is willing to only recognize the rebel-held areas as independent, or the broader pre-war administrative regions of Donetsk and Lugansk, which include Kyiv-held lands.

The separatists control only the eastern parts of Donetsk and Lugansk.

A Kremlin recognition of the entire region could set the stage for a direct clash between Russian and Ukrainian troops along the current frontline, which includes towns such as Avdiivka.

Local residents are bracing for the worst.

Pensioner Tetyana Polishchuk has held on to her flat through some of the fiercest months of war. But now she is packing her emergency evacuation bag, ready to run.

“They’ve started firing a lot more,” the 67-year-old says. “Because of the possible Russian invasion, I even packed my bags. I put them by there by the door, to be ready.”

But Yevgeniy Tsyganok says he has nowhere left to go after moving his family to Avdiivka in the weeks after the rebels’ seizure of his home city of Donetsk in 2014.

“Sometimes, a very large shell or something like that shoots by and you feel it with your whole body,” the 27-year-old says.

“But we can’t run from here because my parents are there on the other side, in Donetsk,” he said. “They can’t go anywhere, and I feel like I can’t either. This is our land.”