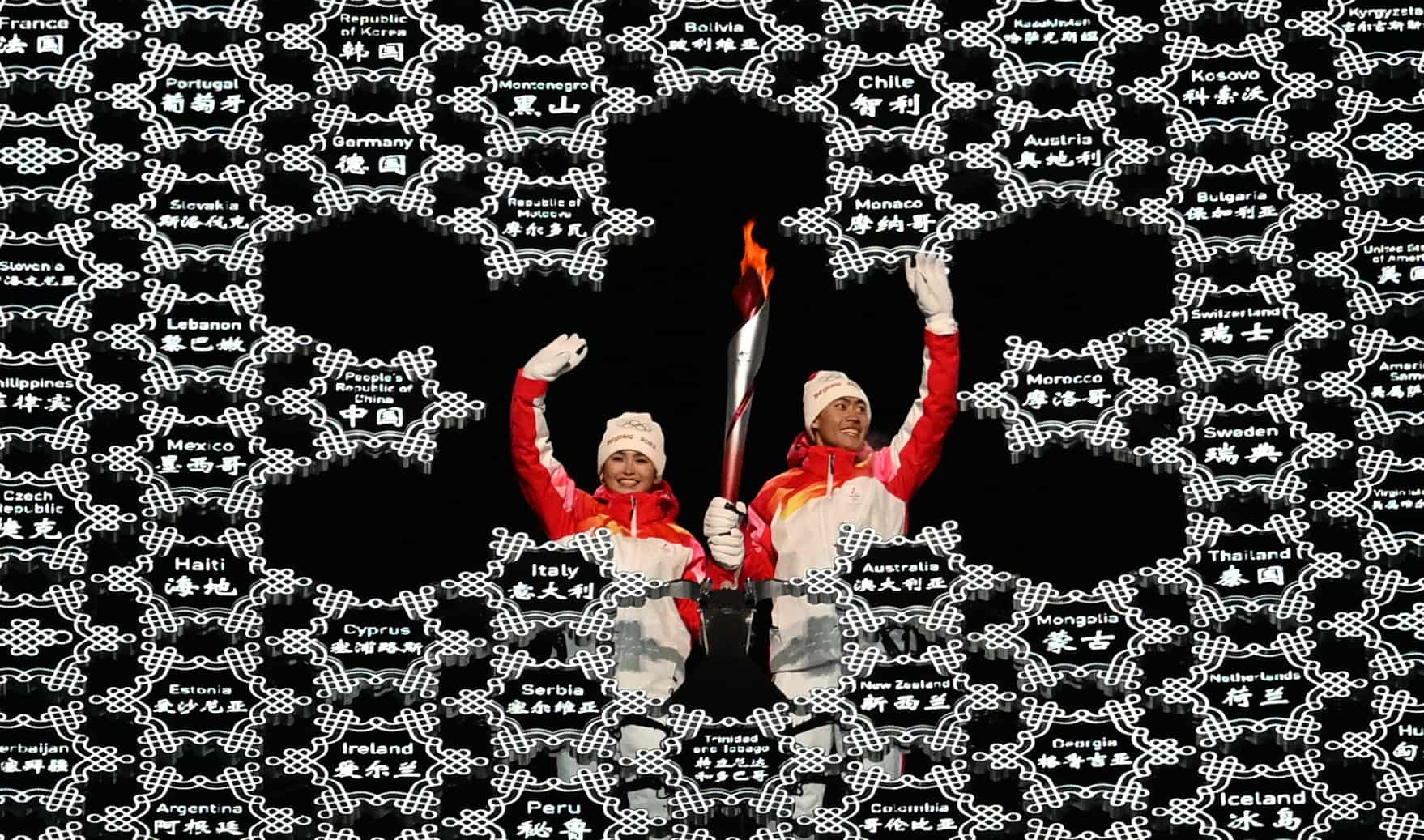 Fireworks exploded over the “Bird’s Nest” as the lattice-shaped stadium took center stage, just as it did at the 2008 Games, as Beijing becomes the first city to host both a Summer and Winter Olympics.

Xi, under whose rule China has adopted a more muscular attitude internationally compared to 14 years ago, was given a rapturous welcome by the socially-distanced crowd wearing face masks, for what his ruling Communist Party hopes will be a soft-power triumph.

The ceremony was dazzling but less spectacular than the extravaganza 14 years ago.

It got off to a solemn start when eight soldiers slow-marched with the Chinese flag, before the national anthem rang out into the cold night air.

At the end of the ceremony, the Olympic torch was secured to the center of a giant snowflake, which was then illuminated to become the cauldron and hoisted above the stadium.

One of the final two torchbearers was Dinigeer Yilamujiang, a Chinese cross-country skier from the troubled Xinjiang region.

Campaigners say at least one million people from the Muslim Uyghur minority have been incarcerated in “re-education camps” in Xinjiang.

Xi was joined by world leaders including Russian counterpart Vladimir Putin, the two having met earlier in the day.

China and Russia have both seen ties with Washington deteriorate markedly, and with tensions rising in Europe over Russia’s troop build-up on the Ukrainian border, Putin hailed the “truly unprecedented nature” of relations with his hosts.

The United States, Britain, Canada and Australia are among countries staging a diplomatic boycott of the Games over China’s rights record, particularly the fate of the Uyghurs.

Those nations’ athletes will still compete at the Games, which run until February 20 and are taking place inside a vast “closed loop” bubble designed to thwart the virus.

UAE and Saudi leaders at the ceremony

an attended the opening of the “Olympic Games Beijing 2022”. His visit came in response to the invitation of President Xi.

‘Fragile world’
About a third of the 90,000-capacity “Bird’s Nest” was full, but like sports events at the Games, tickets were not sold to the public because of the pandemic.

The show was masterminded by acclaimed Chinese film director Zhang Yimou, who was behind the 2008 extravaganza.

After the teams marched into the arena, International Olympic Committee president Thomas Bach appealed to “all political authorities across the globe”, urging them to “give peace a chance”.

“In our fragile world, where division, conflict and mistrust are on the rise, we show the world — yes, it is possible to be fierce rivals while at the same time living peacefully and respectfully together,” Bach said.

‘Appalling’
Despite the warm words and party atmosphere, the lead-up to the Games was clouded by controversy, including warnings about surveillance of athletes and what will happen to them if they make anti-China comments.

“What I hope with these Games is that there is so much attention brought to these issues about human rights it does put pressure on the Chinese government to really address it,” Rippon, a bronze medallist at the 2018 Winter Games, told CNN.

There are also environmental concerns about holding a Winter Games in one of the driest places in China and on almost entirely man-made snow.

Then there is Covid. The nearly 3,000 athletes and tens of thousands of support staff, volunteers and media have been cut off from Beijing’s general population.

China, where the virus emerged in late 2019, has pursued a no-nonsense zero-Covid policy and adopted the same approach to the Games, with everyone inside the bubble tested daily and required to wear a mask at all times.

There have been more than 300 Covid cases in the bubble, among them an unknown number of athletes.

‘In our hearts’
Unlike the huge celebrations and outpouring of national pride that greeted the 2008 Games — seen as China’s coming-out party — enthusiasm this time has been noticeably more sober among locals.

Covid restrictions meant that most people watched the show from home and will likewise see the sport over the coming fortnight from their sofas.

Speaking on the streets of the capital, Yin Rui, 31, said she was eager to watch on television.

“Even if they are at home people will cheer for the Olympics,” she told AFP, adding that “enthusiasm in everyone’s hearts remain” for the Games — even though they will take place behind high fences and closed doors.

Some sports, such as curling and figure skating, have already begun and Saturday will see the first gold medal of the Games awarded, in cross-country skiing.