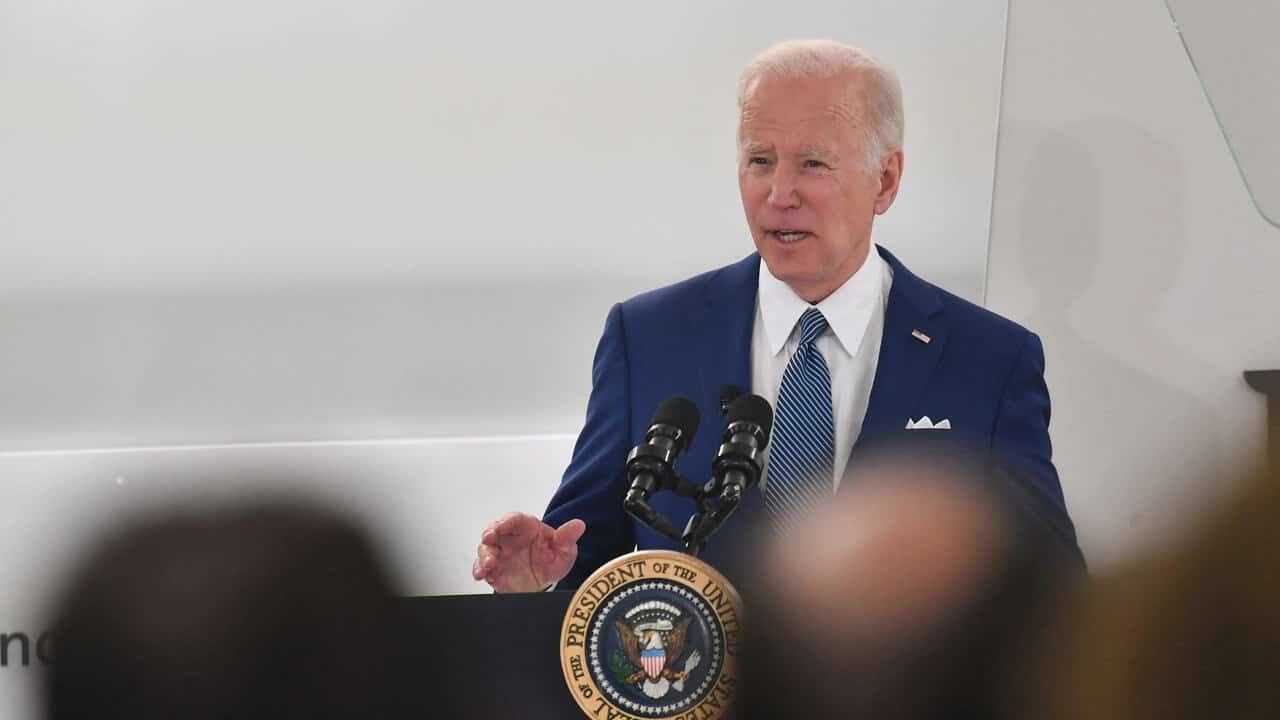 President Joe Biden for the first time Tuesday accused Vladimir Putin’s forces of committing genocide in Ukraine, where Russia was intensifying its campaign to subdue the devastated port city of Mariupol.

Biden’s accusation came as Moscow — already accused by the West of widespread atrocities against civilians — was feared to be readying a massive onslaught across Ukraine’s east that Washington warned might involve chemical weapons.

“Yes, I called it genocide,” Biden told reporters, hours after employing the term during a speech in Iowa — its first use by a member of his administration.

“We’ll let the lawyers decide internationally whether or not it qualifies, but it sure seems that way to me,” Biden said. “It’s become clearer and clearer that Putin is just trying to wipe out the idea of even being able to be a Ukrainian.”

“Calling things by their names is essential to stand up to evil,” Zelensky wrote — renewing his appeal for more heavy weapons to “prevent further Russian atrocities.”

Biden had previously described Putin as a “war criminal” as the discovery of hundreds of civilians reportedly killed in Bucha, outside Kyiv, sparked global revulsion.

But he had stopped short of using the term “genocide,” in line with longstanding US protocol, because of its strict legal definition and the heavy implication the accusation carries.

Adding to the catalogue of horrors emerging from Ukraine, Zelensky sounded the alarm Tuesday about snowballing allegations of rape and sexual assault by Russian forces.

“Hundreds of cases of rape have been recorded, including those of young girls and very young children. Even of a baby!” the Ukrainian leader told Lithuanian lawmakers via video link.

In the latest discovery fuelling allegations of Russian atrocities, Ukrainian prosecutors said six people had been found shot dead in the basement of a building outside the capital.

While the toll on towns occupied during the month-long offensive to take Kyiv is still coming to light, the heaviest civilian toll is feared to be in Mariupol, where Zelensky said he believed Russia had killed “tens of thousands.”

AFP journalists in Mariupol, as part of a Russian military embed, witnessed the charred remains of the city, including the theatre where 300 people were feared killed in Russian bombardment last month.

As fighting dragged toward its seventh week, the Ukrainian army was fighting desperately to defend strategically located Mariupol.

Moscow is believed to be trying to connect occupied Crimea with Russian-backed separatist territories Donetsk and Lugansk in Donbas, and has laid siege to the city, once home to more than 400,000 people.

Reports emerged on Monday from Ukraine’s Azov battalion that a Russian drone had dropped a “poisonous substance” in the area, with people experiencing respiratory failure and neurological problems.

US Secretary of State Antony Blinken said he was unable to confirm the allegations, but that Washington had “credible information” Russia might use tear gas mixed with chemical agents in the besieged port.

The world’s chemical weapons watchdog said it was “concerned” by the unconfirmed reports coming from Mariupol, and was “monitoring closely.”

Pentagon spokesman John Kirby warned the use of such weapons by Moscow would “elicit a response not just from the United States, but from the international community,” without elaborating.

With little hope of a quick end to fighting, President Vladimir Putin pledged Moscow would proceed on its own timetable, rebuffing repeated international calls for a ceasefire.

“Our task is to fulfil and achieve all the goals set, minimising losses. And we will act rhythmically, calmly, according to the plan originally proposed by the General Staff,” Putin told a news conference with Belarusian President Alexander Lukashenko.

He also dismissed as “fake” claims that hundreds of civilians were killed in Bucha under Russian occupation.

Bucha Mayor Anatoly Fedoruk said more than 400 people had been found dead after Moscow’s forces withdrew, and 25 women reported being raped, as the town prepares for the return of residents who fled the fighting.

“What people will find in their homes is shocking, and they will remember the Russian occupiers for a very long time,” he said.

Heavy bombardment continued in Ukraine’s east as civilians were urged to flee ahead of an expected Russian troop surge around the Donbas region, notably near the town of Izyum — adding to the 10 million people already displaced by fighting.

A steady stream of residents fled by bus and train from Kramatorsk — the Ukrainian military’s main hub for its operations in the east — and neighbouring Sloviansk as fears grew that the cities would be key targets.

“What is happening is inhuman, (Putin) is a fascist. I don’t know what to call him — a devil incarnate,” said 82-year-old Valentina Oleynikova, who was fleeing Kramatorsk with her husband.

In the war-torn eastern town of Volnovakha, now under Moscow’s control, a school reopened with children listening to a recording of the Russian anthem, watched by armed soldiers.

After two weeks of bombardment, many houses, shops and public buildings are now semi-ruined, windowless or burnt out.

In a separate development, Zelensky offered to swap a pro-Kremlin tycoon — arrested after escaping from house arrest — for Ukrainians captured by Russia.

Zelensky posted a picture of a dishevelled-looking Viktor Medvedchuk — one of the richest people in Ukraine, who counts Putin among his personal friends — with his hands in cuffs and dressed in a Ukrainian army uniform.

“I propose to the Russian Federation to exchange this guy of yours for our boys and our girls who are now in Russian captivity,” Zelensky said in a video address on Telegram.

Medvedchuk, a hugely controversial figure in Ukraine, was under house arrest over accusations of attempting to steal natural resources from Russia-annexed Crimea and of handing Ukrainian military secrets to Moscow.