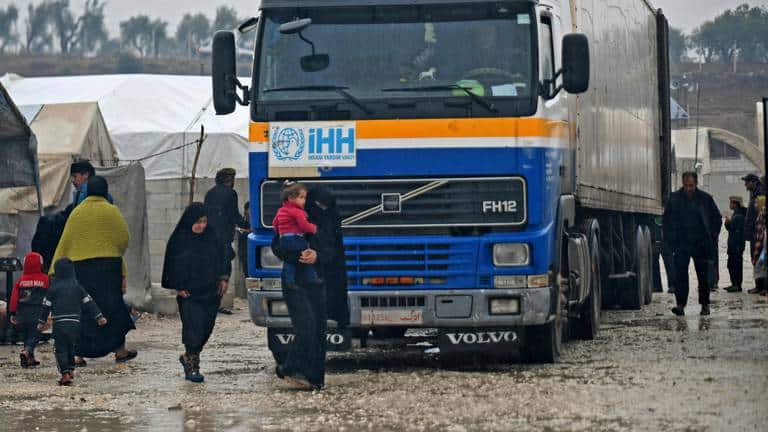 Relief organizations distribute humanitarian aid at a camp for displaced people near the town of Al Muhammadiyah. AFP/File

Cross-border humanitarian aid to north-west Syria — not approved by Damascus — remains “essential,” the UN said on Monday, as the measure was extended for six months without a new Security Council vote.

The council had previously renewed the authorization allowing aid into rebel-held areas in the country’s northwest “for a period of six months… until 10 January 2022,” through the crossing at Bab al-Hawa on the Syrian border with Turkey.

The text provided for “an extension of an additional six months, that is, until 10 July 2022,” subject to a report by the UN Secretary-General.

For the West, the renewal to July had been interpreted as automatic, while Russia had raised the possibility of requesting a new Security Council vote, though it has not taken that step.

In his December report, UN chief Antonio Guterres had stressed the impossibility of replacing at this stage the cross-border mechanism for one that crossed front lines from Damascus.

Moscow favors this method as recognition of the Syrian government’s sovereignty over the whole country.

Aid through the Bab al-Hawa crossing primarily serves the roughly three million people living in the Idlib region, which remains outside Damascus’ control.

“The cross-border delivery of aid is essential,” UN spokesman Stephane Dujarric said during his daily briefing.

“We need aid to be delivered through cross-border and through cross-line. Those are essential elements for us to meet the humanitarian needs of all Syrians.”

Asked about the lack of a new Security Council vote, he said “we would welcome any decision that would allow us to continue with this vital cross-border aid.”