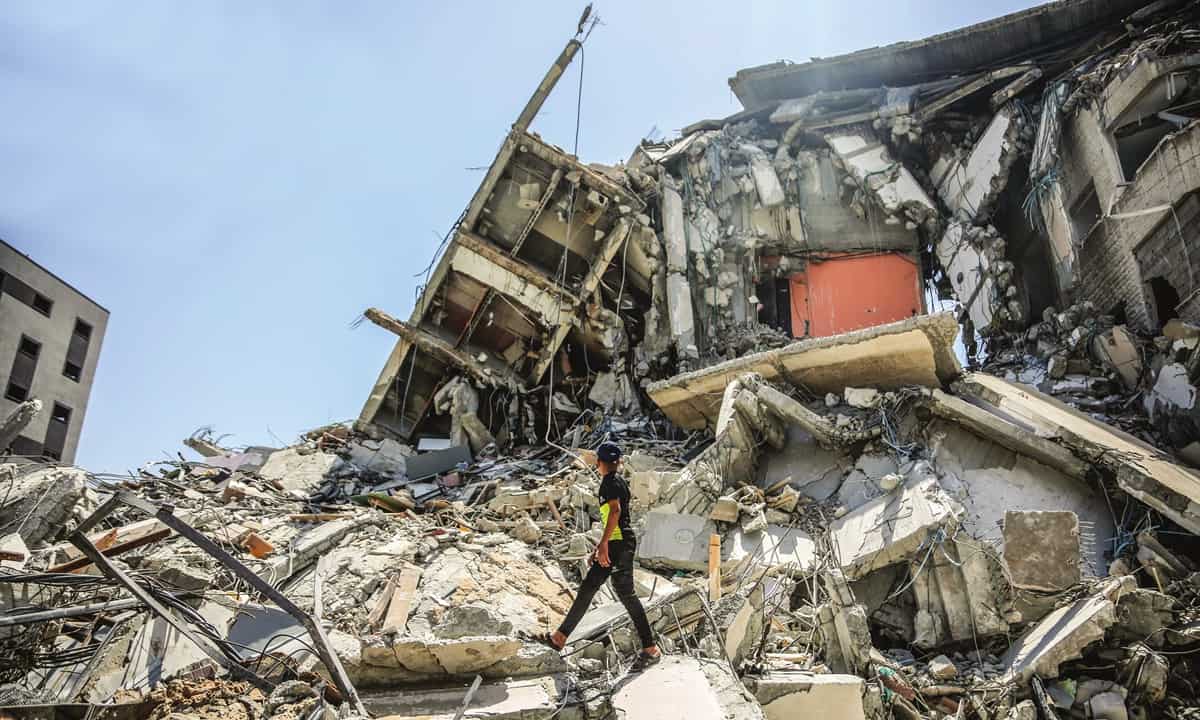 A Palestinian walks over the rubble accumulated in Gaza, following the ceasefire agreement between Gaza and Israel.

Egypt is looking to $500 million Gaza reconstruction project as a way of bolstering up its influence in the Middle East, capitalizing on clout it garnered by brokering a ceasefire between Israel and Hamas.

President Abdel Fattah al-Sisi pledged the cash injection to rebuild the Gaza Strip after it was left in ruins during an 11-day exchange of Hamas rocket fire and devastating Israeli air strikes. Sisi was widely praised for playing a pivotal role in negotiating an end to the deadly hostilities between Israel and Gaza’s Islamist rulers Hamas on May 21, including by US President Joe Biden.

According to reports in the Egyptian media, the aid package is in the form of construction undertaken by Egyptian firms — a playbook that Sisi has used to great effect domestically since taking power in 2014. Sisi has employed the military’s engineering arm for large-scale infrastructure projects such as the construction of a new administrative capital, as well as dozens of flyovers and highways nationwide.

“Sisi no doubt sees this reconstruction aid as an investment in exchange for political influence — both on Egypt’s border in Gaza and at the international level,” Sarah Smierciak, a Middle East political economist, told AFP. Egypt’s heavily secured Rafah crossing is Gaza’s only passage to the outside world not controlled by Israel, which has blockaded the enclave since 2007.

In a rare move, Cairo opened the crossing during intense fighting to allow wounded Palestinians to be treated in Egyptian hospitals. “This pledge will make Egypt’s voice heard among Palestinian ranks,” said Mustapha Kamel al-Sayyid, a Cairo University professor of political science.

“It (the reconstruction) is definitely a part of Egypt regaining its regional role,” he added. The move is part of a wider thaw this year in Egypt’s relations with foes such as Qatar and Turkey, which back Hamas — while Cairo regards it with suspicion.

Cairo also considers Hamas an affiliate of the Muslim Brotherhood, which it outlawed in 2013 after the Sisi-led military’s ouster of former president Mohamed Morsi. Egypt “changed its outlook towards Hamas”, Sayyid said, after the group renounced its ties with the Brotherhood in 2017.

It has also overseen a tentative national reconciliation between Hamas and its political rival Fatah, which runs the Palestinian Authority from Ramallah in the occupied West Bank. “The reconstruction aid could make Egypt an acceptable partner for Hamas… and soon we could see Hamas helping Egypt in securing the border,” he added. Cairo for years has accused Hamas of smuggling weapons to insurgents in its restive province of North Sinai through cross-border tunnels.

But Smierciak said Egypt could leverage the sizeable aid package to sideline Hamas which it “views as a threat” to the country’s national security. Last week, Egypt said it sent an aid convoy to Gaza with cranes, diggers and trucks to “prepare the ground for reconstruction” of the enclave.