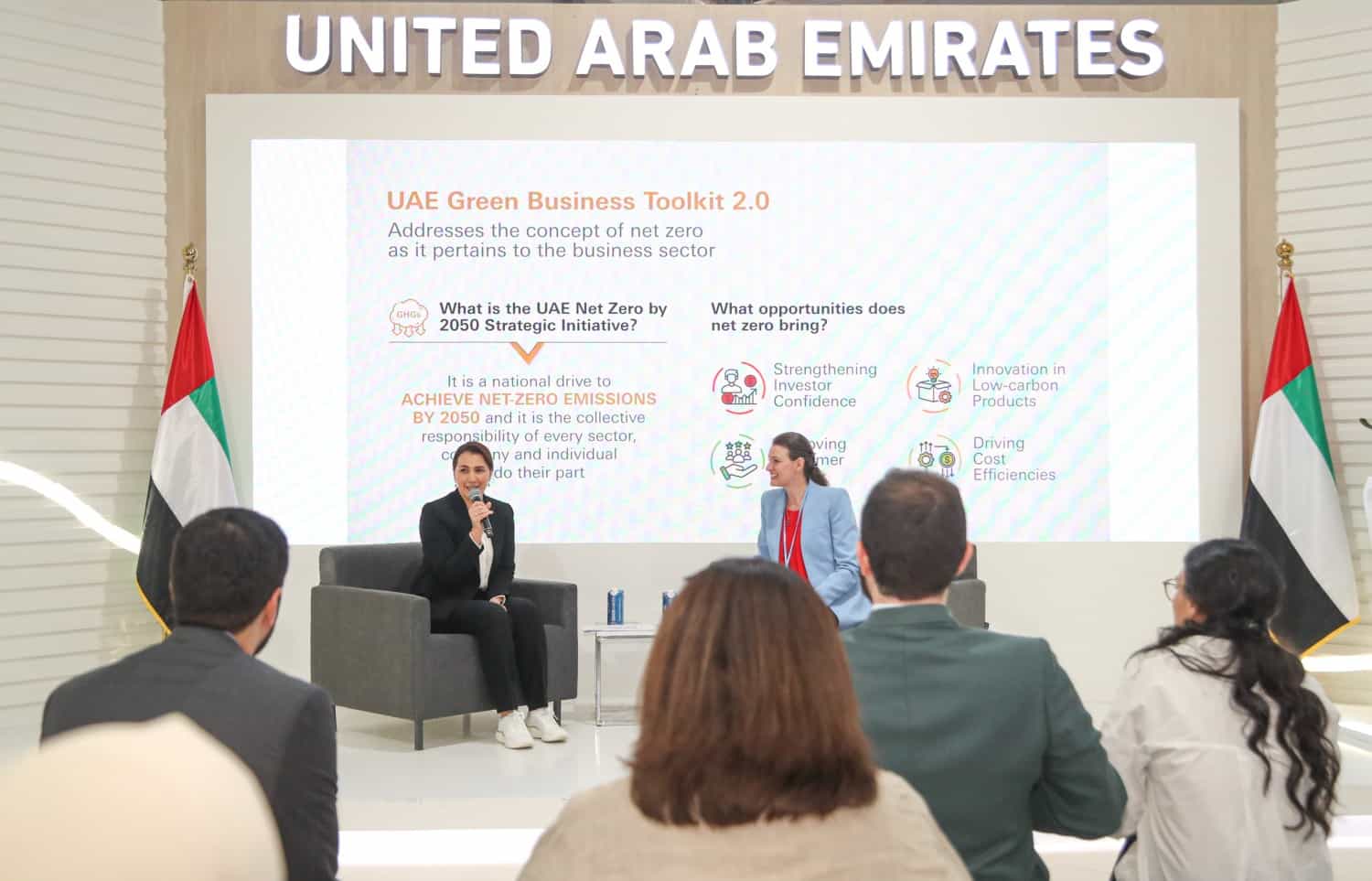 ABU DHABI, UAE — Ali Obaid Al Dhaheri, UAE Ambassador to China, has said that recently concluded COP27 in Egypt is an indispensable forum for bringing together the global family of nations under one roof to share scientific insights, discuss strategies and pledge commitments in combating climate change – the defining challenge of our time.

In an op-ed in a leading Chinese newspaper, Al Dhaheri said, “Our beautiful planet is our shared home. Its bountiful rewards are nature’s gifts to us all, but its ailments are problems that concern everyone – challenges we must all respond to and face together. COP27, the 2022 United Nations Climate Change Conference, recently concluded in Egypt. The annual summit is an indispensable forum for bringing together the global family of nations under one roof to share scientific insights, discuss strategies and pledge commitments in combating climate change – the defining challenge of our time. As my own country, the UAE, gets ready to take on the mantle of hosting COP28 in Dubai next year, it is worth reflecting on how we as Emiratis, along with our international friends and partners, especially in China, have been working towards these goals.

In his recent policy report to the 20th Party Congress of the CPC, President Xi Jinping spoke astutely of the need for multilateralism and international cooperation in all spheres – diplomacy, trade, technological innovation. Perhaps nowhere is this multilateralism more desperately needed than in our planetary fight against climate change, a sentiment echoed by the President His Highness Sheikh Mohamed bin Zayed Al Nahyan during his address at COP27: “The dangers of climate change affect everyone without exception, and the future of our children and grandchildren depends on the measures we take today”.

Both of our national leaders are keenly aware of the fact that, as two advanced countries at the forefront of technological innovation, it is especially incumbent upon us to be active global stakeholders at this precarious time. We know the threat is real. We do not need alarmist predictions of impending doom; however, it is worth noting the geographical scope of recent climatic cataclysms to remind ourselves this is a responsibility we all share.

Extreme weather phenomena have been unfolding all over the world: abnormal heatwaves across India, devastating monsoon rains in Pakistan; in China, the longest summer drought since official records began, alongside a record high in heavy rain warnings; in Europe, perhaps the worst summer drought for the continent in 500 years. I mention these things not to be defeatist in the face of uncontrollable forces, but to emphasise climate change is the one issue that concerns all of us, and must be acted on accordingly.

It is surely no accident both this year’s COP27 and next year’s COP28 are taking place in the Middle East and North Africa region, an arid part of the world that has long been at the frontier of climate change and has had to adapt to living with desertification and water scarcity. As this year’s host, Egypt should be applauded for doubling down on its focus on Africa – a vast and rich continent that nevertheless continues to bear the brunt of the globe’s climate change woes, especially when it comes to food security. The UN has warned abnormal droughts have pushed some 22 million people in the Horn of Africa to be highly susceptible to starvation. In that regard, and largely through the efforts of the G77 group of developing countries, this year’s summit has achieved an unprecedented breakthrough of agreeing on the creation of a “Loss and Damage” fund to help poorer nations facing the most risk from climate change.

The UAE wholeheartedly supports Egypt’s commitment to addressing the pressures faced by the Global South and recognises the far-reaching efforts China has made over several years in building resilience in some of the world’s least developed countries. As the main logistics hub for the Belt and Road in the Middle East, the UAE understands first-hand the integral role multilateral initiatives can play in promoting development and connectivity, alleviating some of the absolute poverty that makes the effects of climate change immeasurably worse. For our part, to date the UAE has invested USD 16.8 billion in renewable energy ventures in 70 countries and has pledged to invest over USD 50 billion in clean energy projects at home and abroad over the next decade.

Together, the UAE and China both strive to achieve the United Nations’ Sustainable Development Goal of eliminating world hunger – something that can only be achieved through concerted scientific collaboration on an international level. Through the comprehensive strategic partnership between our two nations, the UAE and China are pioneering new agricultural technologies and sustainable methods, and working on enhancing food security. This was the main focus of our recent bilateral ‘Sci-Tech’ forum, hosted by the UAE Embassy to the People’s Republic of China, which brought together leading policymakers and scientists from our country with their counterparts in China’s Ministry of Agriculture and Rural Affairs. Our joint efforts are bearing fruits and will go on to benefit some of those societies across the globe that are most vulnerable to climate change.

Both the UAE and China understand our immense duties in nurturing and conserving our natural landscapes so that future generations can continue to enjoy their wonders. Despite its desert climate, the UAE is also blessed with some of the most impressive biodiversity in the Arabian Peninsula and an extensive wetland ecosystem. During our presidency of COP13 – the Ramsar Convention on Wetlands – in 2018, the UAE assembled the international community to discuss how best to protect these unique and fragile ecosystems, which play a major role in the mitigation of climate change. As China becomes the standard-bearer of wetland conservation this year with its presidency of COP14, it was a pleasure for me to address the opening ceremony in Wuhan at the invitation of the National Forestry and Grassland Administration. I have no doubt China will continue to be a world leader in this area in the years to come.

Most importantly, the UAE and China are resolutely devoted to our commitments under the 2015 Paris Agreement – a resounding symbol of the very best in multilateral policymaking. The UAE was the first country in the MENA region to adopt and sign the Paris Agreement, as well as the first to commit to a net-zero target by 2050. As we prepare for our COP presidency next year, we should note COP28 in Dubai will conclude the first comprehensive assessment of all the progress that has been made on the Paris Agreement to date and determine a new way forward. Alongside this ‘global stock-take’, COP28 will also set the ‘Global Goal on Adaptation’ to assess the efficacy of ongoing global efforts to adapt to climate change.

Adaptation is the very essence of our strategy. In the UAE, we do not see the fight against climate change as a zero-sum game, pitting the health of the planet in opposition to human progress. We are committed to cutting emissions, not to reducing development. While the UAE already produces some of the world’s least carbon-intensive crude oil, our ongoing dedication to energy transition has inspired the Emirati people to develop a peaceful nuclear program, which prevents the release of 21 million tons of carbon emissions each year – the equivalent of removing 3.2 million cars from the road annually. As President Xi Jinping mentioned in his recent report, China is also focused on its energy transition and will seek to use existing sources in a cleaner and more effective way – this will also open up new opportunities for technological innovation.

As Egypt passes the baton to the UAE for COP28, it is worth noting another resounding success of this year’s summit has been the landmark deal between the two countries to build one of the world’s largest wind farms, which will offset nearly 10 percent of Egypt’s annual carbon emissions.

The road to November 2023 and beyond is full of challenges, but the spirit of international cooperation the COP summits exemplify is strong, and it is the bedrock on which the battle against climate change must be fought.”