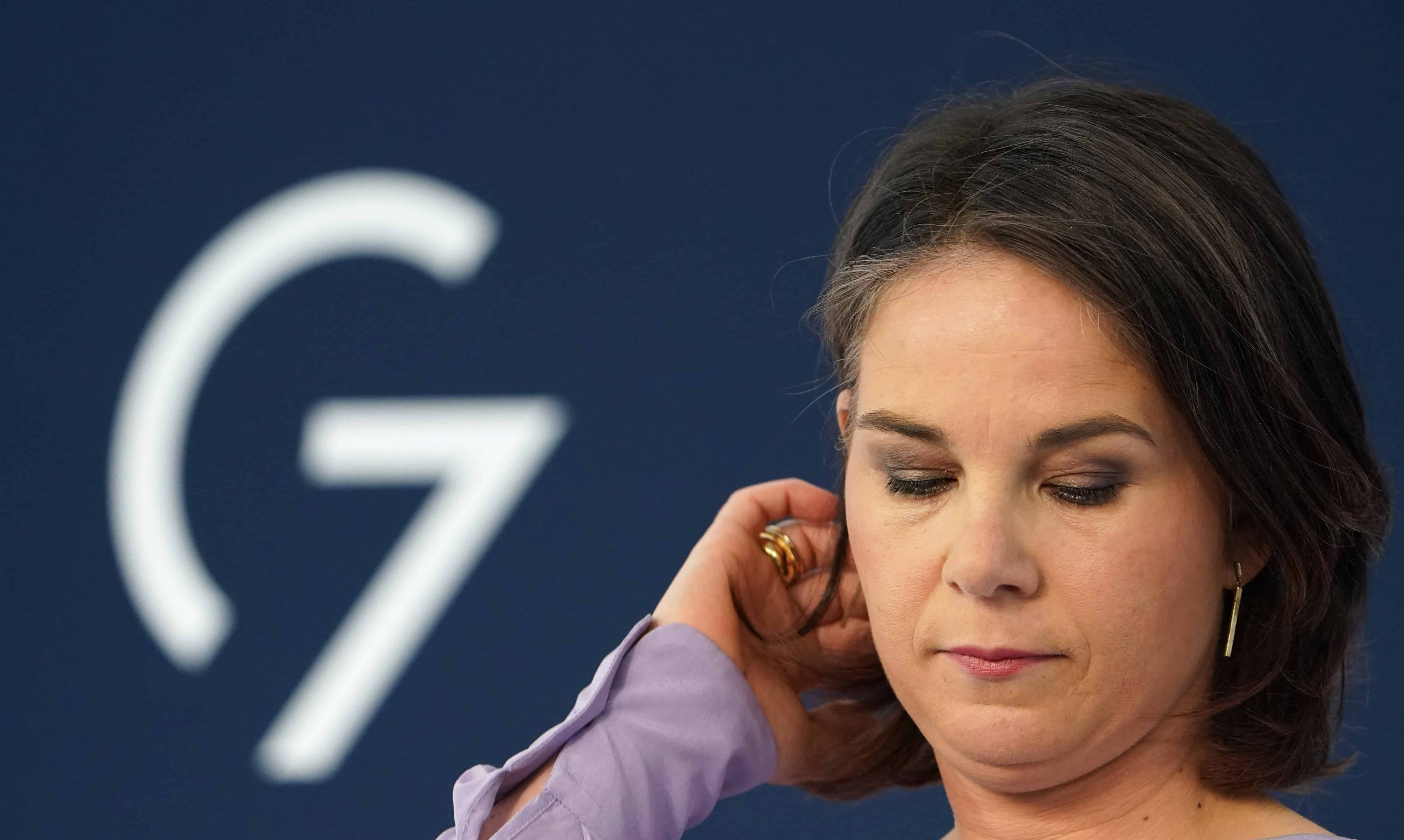 German Foreign Minister Annalena Baerbock gives a press statement at the end of the G7 Foreign Ministers meeting in Wangels, northern Germany, on May 14, 2022. (Photo by Marcus Brandt / POOL / AFP)

The Group of Seven industrialized nations said Saturday they would never recognize the borders Russia is trying to shift by force in its war against Ukraine and pledged enduring support for Kyiv.

Russia invaded Ukraine on February 24 but Kyiv’s forces managed to push Moscow’s troops back from the capital. The conflict is now well into its third month.

“We will never recognize borders Russia has attempted to change by military aggression, and will uphold our engagement in the support of the sovereignty and territorial integrity of Ukraine, including Crimea, and all states,” the G7 foreign ministers said in a statement after three days of talks in northern Germany.

The ministers were joined in the resort of Wangels by their counterparts from Ukraine and Moldova, as well as EU foreign policy chief Josep Borrell.

In their joint statement, they vowed to expand sanctions to include sectors on which Russia is dependent and keep supplying Ukraine with weapons to help it repel Russia’s invasion.

“We reaffirm our determination to further increase economic and political pressure on Russia, continuing to act in unity,” they said.

When asked if allies want to see Russia pushed out of Crimea — annexed in 2014 — as well, German Foreign Minister Annalena Baerbock said it should be up to Ukraine to “decide by themselves about their country”.

“It’s their territory and we support every measure and every step they are taking to ensure that people in Ukraine… can live as everybody else in Europe again — in peace but also in security and freedom in their own country,” said Baerbock, whose country currently holds the presidency of the G7.

Western countries have supplied Ukraine with artillery, anti-aircraft missiles and anti-tank weapons, among others.

Borrell had also on Friday pledged an extra half a billion euros in EU military aid to help Kyiv repel the Russian invasion, but Kyiv has been pushing allies for more support.

Ukrainian Foreign Minister Dmytro Kuleba on Friday said he has asked the G7 to seize Russian assets and hand them over to Ukraine.

Baerbock noted that Canada has already taken the lead in taking such a measure but she said Europe is bound by different legal imperatives that would have to be navigated.

“If we were to take this path… it would have to be done in such a way that it stands up to our law,” said Baerbock.

As the war drags on, the G7 foreign ministers also highlighted the growing impact of the war on poorer countries, especially in the area of food security.

“We are determined to accelerate a coordinated multilateral response to preserve global food security and stand by our most vulnerable partners in this respect,” they said.

In another nod to the growing global impact of the conflict, the ministers also warned China against undermining punitive action against Moscow for its invasion.

They also slammed Belarus over its stance on the war.

“We… call on Belarus to stop enabling Russia’s aggression and to abide by its international obligations,” they said.