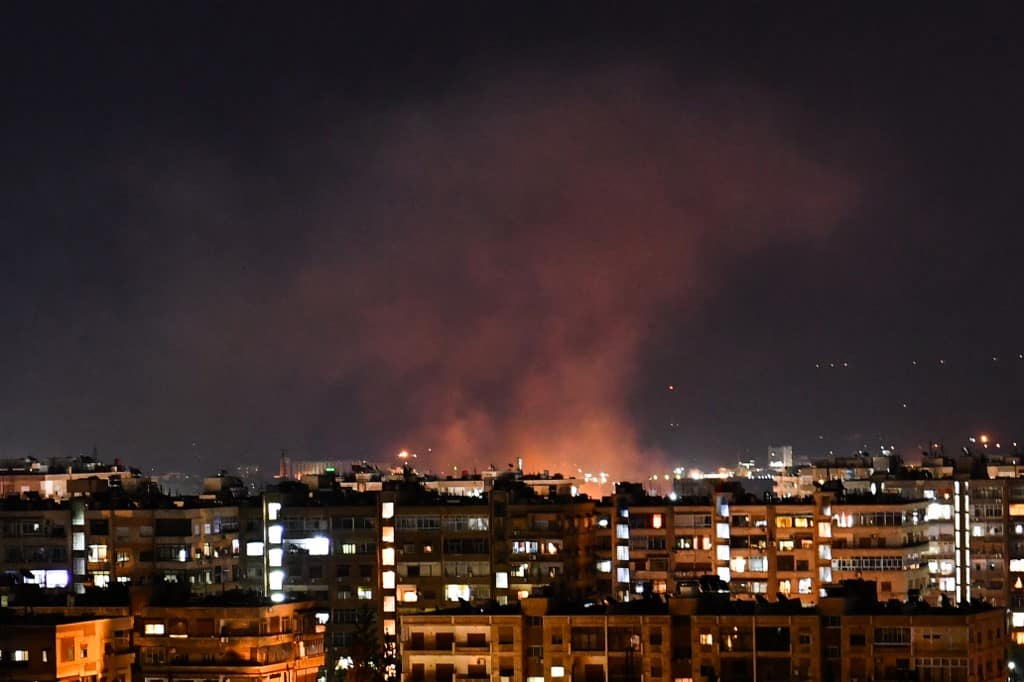 File picture of an Israeli airstrike targeting south of the capital Damascus.

An Israeli air strike hit a shipment of Iranian weapons in the Syrian port of Latakia Tuesday, in the first such attack on the key facility, a war monitor said.

The Israeli raid “directly targeted an Iranian weapons shipment in the container yard,” the Syrian Observatory for Human Rights said.

Syrian state media reported the strike on the container yard at Latakia port without specifying what was targeted.

The Observatory, a UK-based organization with a wide network of sources on the ground across Syria, said the raid triggered a series of explosions.

It reported “huge material losses” but added there were no immediate reports of casualties.

According to the Syrian state news agency SANA, the strike occurred at 1:23 am (2323 GMT Monday).

“Our air defenses repelled the Israeli aggression in Latakia,” it said, adding that a number of containers caught fire in the strike.

Latakia is the northernmost of Syria’s main ports, and lies around 230 kilometers (140 miles) north of Damascus.

Photos and footage published by SANA showed a fire in the yard but state television said later that firefighters had brought the blaze under control.

Israel rarely comments on the air strikes it carries out in Syria but has said repeatedly it will not allow its archfoe Iran to extend its footprint in Syria.

Since civil war broke out in Syria in 2011, Israel has carried out hundreds of air strikes on Syrian territory, targeting government positions as well as allied Iran-backed forces and Hezbollah fighters.

On November 24, Israeli missile strikes in the west of Homs province killed five people, according to the Syrian Observatory for Human Rights.

Iran has been a key supporter of the Syrian government in the decade-old conflict.

It finances, arms and commands a number of Syrian and foreign militia groups fighting alongside the regular armed forces, chief among them Lebanon’s powerful Hezbollah group.

Tuesday’s strike came as Syrian Foreign Minister Faisal Mekdad wrapped up a visit to Tehran, where he met with top officials to discuss deepening ties.

In 2019, Syria announced it was planning to turn over the container terminal at Latakia port to Iran.

Earlier this year, Iran said it was planning to establish a direct shipping line between Latakia and one of its southern ports.

The war in Syria is estimated to have killed nearly half a million people and displaced millions more since it began with a brutal crackdown on anti-government protests in 2011.