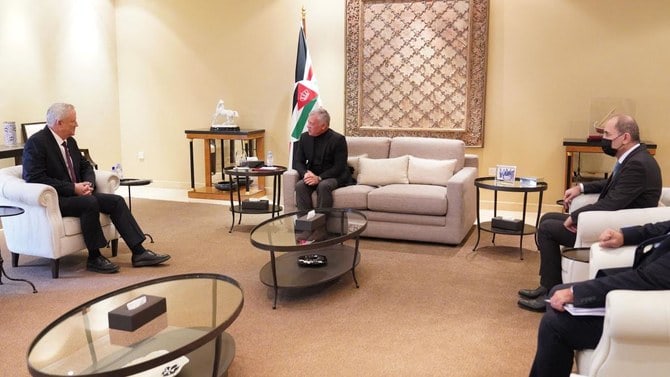 Israel has long maintained ties with Jordan, in a region that has traditionally been largely hostile due to the conflict between the Jewish state and the Palestinians.

Visits by Israeli officials to Jordan have increased since the coalition government of Prime Minister Naftali Bennett took power in June, which made strengthening ties with Jordan a priority.

“King Abdullah reiterated the need to maintain calm in the Palestinian Territories, and to take the necessary measures to create the horizon needed to achieve just and comprehensive peace, on the basis of the two-state solution,” a statement by Jordan’s royal court said.

Israel’s government said talks “focused on security and policy topics”, during which Gantz thanked the king for playing a “critical role in maintaining regional peace and stability”.

Gantz also “expressed his commitment to further developing security, economic and civilian exchanges”, but the Israeli statement made no mention of the Palestinian territories.

In 1994, Jordan became the second Arab nation to sign a peace treaty with Israel, 15 years after Egypt.

But ties became strained under the right-wing government of former prime minister Benjamin Netanyahu, and Bennett met with King Abdullah shortly after taking power in a bid to repair the relationship.

In September, Israeli President Isaac Herzog met with King Abdullah, in what the former called an “excellent” exchange.

Bennett’s government has not made reviving long-moribund peace negotiations with the Palestinians a priority.

The coalition government is comprised of disparate elements — ranging from right-wing Jewish nationalists who oppose a two-state solution, to centrists and Arabs — and the topic is widely seen as too internally divisive for the administration to address.