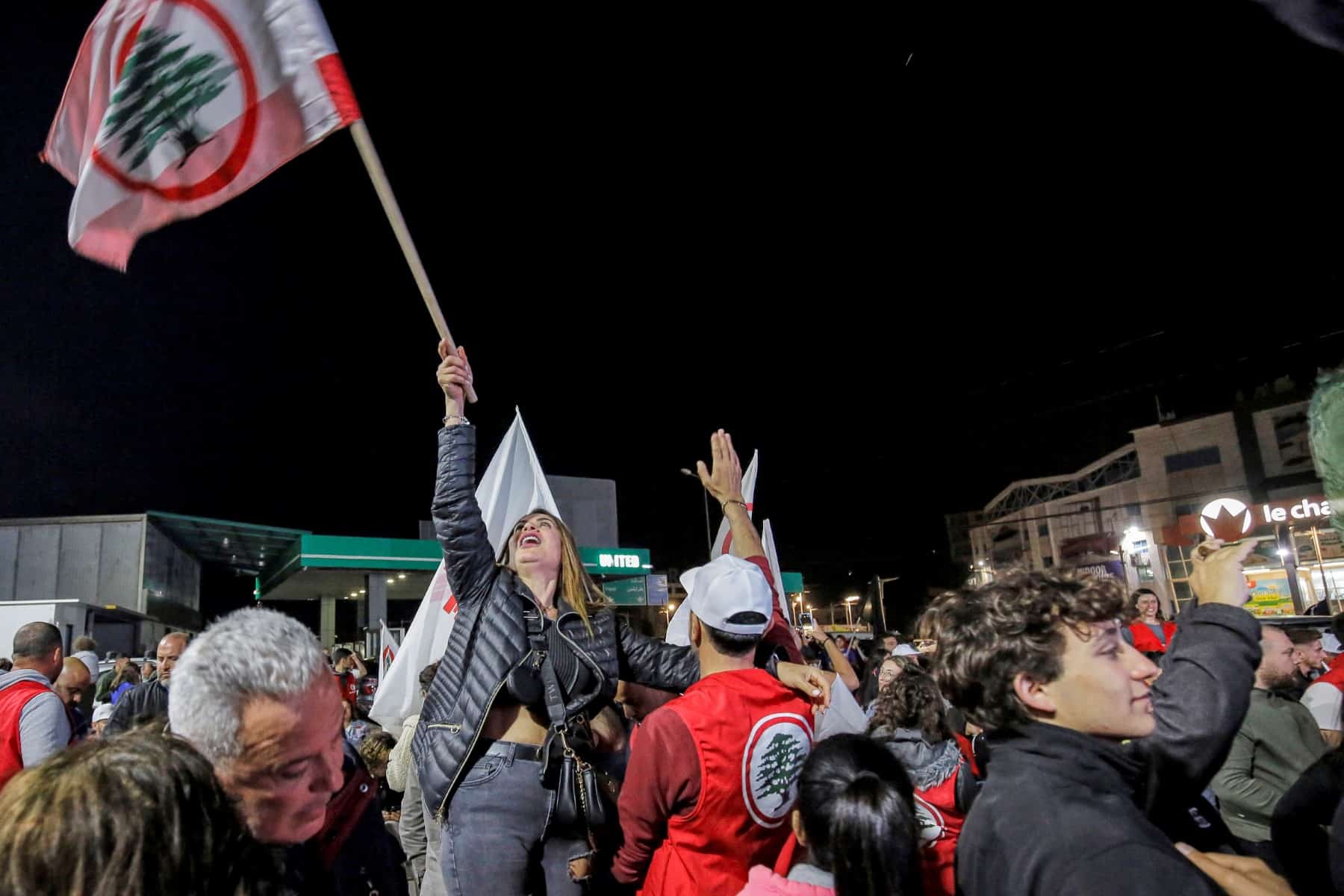 Supporters of the Lebanese Forces party celebrate in the Lebanon's northern coastal city of Batroun as they await results after the end of voting in the parliamentary elections on May 15. (AFP)

An election in crisis-hit Lebanon appears to have dealt a setback to the biggest bloc, led by the Shiite Muslim Hezbollah party, and boosted reformists, provisional results showed Monday.

Turnout was low in the general election Sunday, the first since the Mediterranean country was plunged into a deep economic crisis that has stoked popular fury with the hereditary and graft-tainted ruling class.

Many polling booths lacked electricity, forcing voters to use their smartphone lights to cast their ballots, in a reflection of Lebanon’s most painful crisis since the 1975-1990 civil war.

Official results later Monday will show whether Hezbollah, a political and military movement seen as a state within a state, and its allies can keep an actionable majority in Lebanon’s 128-seat parliament.

The Lebanese Forces (LF) of former warlord Samir Geagea, which has strong ties with Saudi Arabia, won several new seats and should emerge as the largest Christian party.

New opposition candidates also booked some gains, pushing forward the agenda of a cross-sectarian protest movement that erupted in late 2019 against a ruling elite widely seen as inept and corrupt.

Whatever the final election outcome, observers expect months of haggling over the next government line-up, and yet more political paralysis at a time Lebanon needs an IMF bailout.

Election turnout was just 41 percent — eight points lower than in 2018 — suggesting that the traditional sectarian parties that have shared power like a cartel for three decades failed to mobilise their supporters.

“Abstention is partly linked to frustration with the political class and the feeling that the economic situation will not change,” said Lebanese analyst Karim Bitar.

Turnout was particularly low in Sunni Muslim areas, after former premier Saad Hariri triggered a de facto boycott in his community by pulling out of the elections.

Some of the politicians most reviled by the reform camp suffered stinging losses, including several MPs who had traditionally represented the interests of neighbour and former occupying force Syria.

New opposition parties produced a strong showing in various parts of the country. While the reformists struggled to unite ahead of the vote, they could end up holding enough seats to have an unprecedented impact on the country’s political game.

A presence of 10 or more lawmakers could disrupt the horsetrading between political barons that has characterised Lebanese politics for decades and leave new reformists in a kingmaking position.

One voter who backed opposition candidates, 32-year-old Jad Abdel Karim, said that “even if hopes of success are small, we voted to show them that they are not alone in the country.

“We want to build a country even if it will take time.”

The election was held amid an unprecedented crisis for Lebanon, which defaulted on its debt two years ago, and where the currency has since lost 95 percent of its value.

The other major cataclysm suffered by Lebanon was the enormous Beirut port explosion of August 2020 that killed more than 200 people, injured thousands and devastated swathes of the city.

Political heavyweights across the party spectrum have obstructed any meaningful investigation into the blast.

Two of the main suspects over the disaster, which is widely blamed on state negligence and corruption, even looked sure to have secured re-election in Sunday’s polls.

Several irregularities in the polling process were reported, as well as scuffles and cases of voter intimidation.

The outcome of the vote could have an impact on a presidential election due later this year.

President Aoun, 88, has long been expected to be succeeded by his son-in-law, FPM leader Gebran Bassil — but Bassil’s bid suffered a massive blow with the surge of the Lebanese Forces (LF).

Marc Saad, an LF spokesman, voiced optimism about the coming electoral battle for the head of state.

“We can say that the Lebanese people have punished the governing parties and have aligned with us, expressing their will for a new start in governance,” he told AFP.