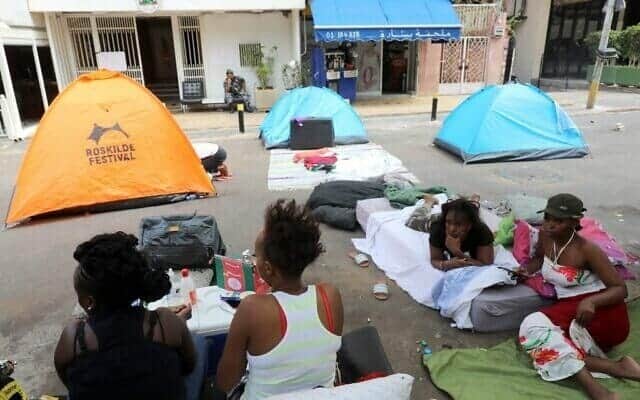 Kenyan domestic workers camp on August 20, 2020, outside the Kenyan consulate in Beirut after losing their jobs, due to the economic crisis, to demand repatriation back home. (AFP)

BEIRUT: More than half of Lebanon’s migrant workers are in need of “urgent humanitarian assistance” to survive an economic crisis that has plunged most of the population into poverty, the UN warned Tuesday.

The country of six million is in the throes of a financial downturn branded by the World Bank as one of the worst since the mid-19th century, with the local currency losing more than 90 percent of its black market value.

Seventy eight percent of the country’s population now live in poverty, the UN Office for the Coordination of Humanitarian Affairs (OCHA) said last week — a proportion far higher than last year’s figure of around 55 percent.

Extreme poverty has reached an estimated 36 per cent of the Lebanese population, OCHA said.

The International Organization for Migration said Tuesday that migrant workers had been hit especially hard.

“They have lost their jobs. They are hungry, they cannot access medical care and feel unsafe,” the UN agency’s Mathieu Luciano said.

“Many are so desperate that they want to leave the country, but they do not have the means to do so”.

According to the IOM, out of the 210,000 migrant workers living in Lebanon, around 120,000 are in need of humanitarian assistance.

Officially pegged at 1,500 to the greenback, the Lebanese pound now sells for more than 20,000 on the black market, sparking rapid inflation.

This has eaten away at already low wages for migrant workers, preventing most from sending money back home.