Morocco puts migrants on trial for attempt to cross into Spain 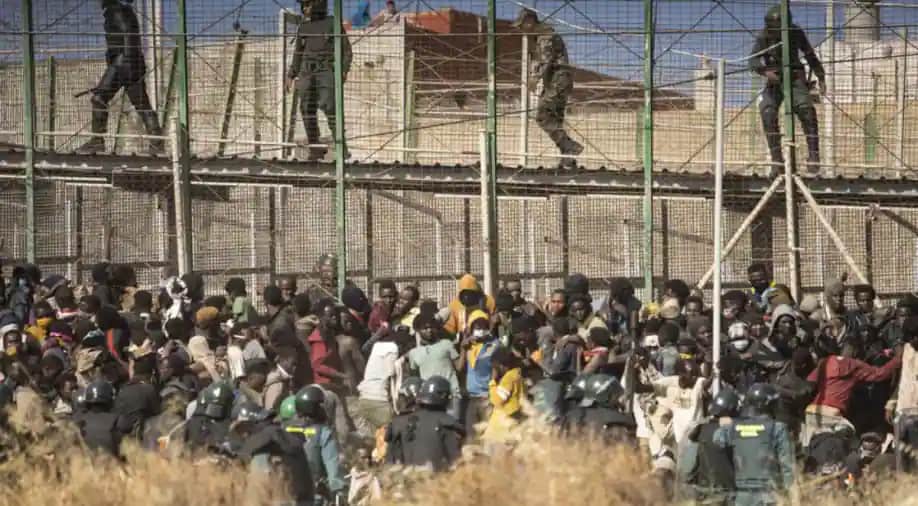 Riot police officers cordon off the area after migrants arrive on Spanish soil and cross the fences separating the Spanish enclave of Melilla from Morocco. AFP

By TRENDS Desk AFP
July 5, 2022 11:09 am
Share
The trial of 36 migrants accused of “illegally entering” Morocco started Monday but was immediately halted, lawyers said, days after a mass attempt to cross into a Spanish enclave.

The hearing came 11 days after at least 23 migrants died during a mass attempt to enter Spain’s Melilla enclave on Morocco’s northern coast.

“We have asked for a postponement to better prepare the case, as other lawyers had joined the defense team,” lawyer Khalid Ameza told AFP.

The defendants face charges of “illegal entry into Moroccan territory”, violence against security forces, forming an “armed mob” and “refusal to comply” with security forces’ orders.

The next hearing is set for July 12 in the northern Moroccan city of Nador, close to Melilla.

Another 29 migrants, including a minor, face a court hearing in Nador on July 13 on charges of “joining a criminal gang to organize and facilitate illegal immigration”, Ameza said.

The 65 defendants are among around 2,000 irregular migrants who on June 24 stormed Melilla’s heavily armed perimeter fence, one of the only land borders between Africa and the European Union.

While the authorities say 23 migrants died, rights groups say the number was at least 37.

Most come from Sudan and reached Morocco via Libya and Algeria, despite the border between the kingdom and its eastern neighbor being officially closed.

The death toll is the heaviest on record in years of similar attempts by migrants seeking better lives in Europe via Spain’s enclaves of Melilla and Ceuta.